What does the FBI's latest turnabout mean for election polls? Hint: We know even less than we did before

Comey's Oct. 28 letter had only just started to show up in polls; this new twist leaves us entirely in the dark 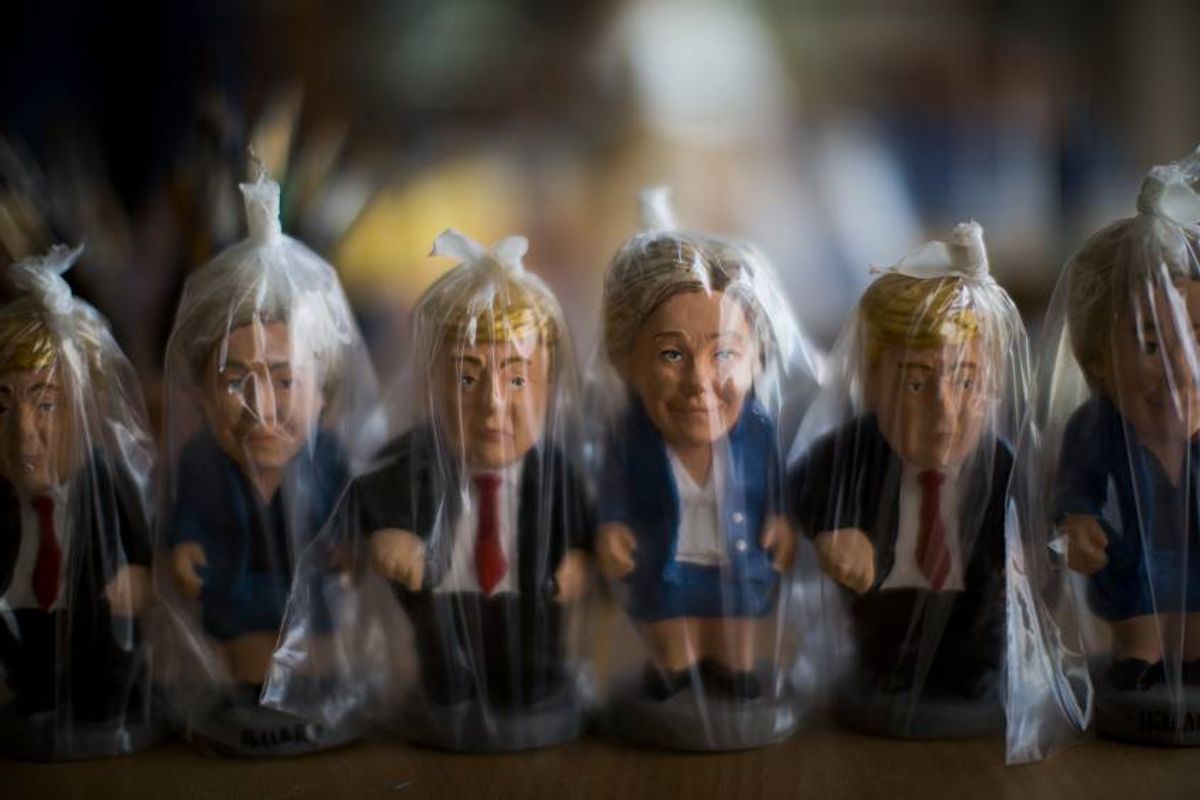 In this Monday, Oct. 3, 2016 photo, miniatures of U.S. presidential candidates Hillary Clinton and Donald Trump are wrapped in plastic bags in a "caganer" factory at Torroella de Montgri, northeast Catalonia, Spain. A curious Christmas tradition in the Spanish autonomous region of Catalonia depicts both candidates in a rather scatological situation. The miniatures called “Caganer”, depict a person defecating, and traditionally symbolizes fertilization and a source of luck and prosperity in the new year. (AP Photo/Emilio Morenatti) (AP)
--

Now that FBI Director James Comey has announced, after reviewing the newly discovered emails from the Anthony Weiner investigation, that he's sticking with his initial recommendation that Hillary Clinton should not face criminal charges, an obvious question remains: Does this come too late to offset the damage caused by Comey's earlier letter to Congress a little more than a week ago?

The short answer is that we have no way of knowing until after the votes have been counted (and maybe not even then). The long answer is that the level of uncertainty is now so high Election Day 2016 will be even more chaotic than was already destined to be the case.

As statistician Nate Silver explained shortly after Comey's announcement on Sunday evening, "Any change will really come too late to be picked up upon by most polls." Indeed, the polls didn't even begin to reflect Comey's Oct. 28 letter to Congress until a couple days after tha. Because Clinton had already started to decline from her post-debate polling high, it took a few more days for pollsters to discern whether the decline accelerated because of Comey's announcement (which it did). This time there won't even be a full 48 hours between the dropping of another bombshell and the moment polls open on Election Day. Because Clinton's numbers had already started to stabilize before Sunday, we may never know whether any improvement between her poll numbers and the election results was influenced by Comey's weekend turnabout.

While the FBI director's interference in electoral politics has been troubling in its own right, it has also infused Tuesday's election with yet another level of uncertainty. There are already reports of attempted voter suppression by Republican officials, the government fears a Russian cyberattack will be ordered by Vladimir Putin to assist Donald Trump's, and Trump himself has encouraged his supporters to intimidate voters and repeatedly suggested the election will be rigged against him. Each of these developments on their own would be enough to shake voters' faith in both the legitimacy of these election results and the electoral process itself. Taken together they have made the 2016 election the most unendurably stressful in recent memory.

Now Americans won't even know for sure how Clinton and Trump are polling until after the election has taken place. Polls don't always correctly predict an electoral outcome -- see Brexit for a recent example -- but the information they provide gives voters a sense of the dynamic context in which their ballots are cast. Maybe it's entirely appropriate that this year that context is chaotic.