I saw Donald Trump's dark soul on Day One: The long, strange trip from the Trump Tower escalator and Mexican "rapists" to Election Day 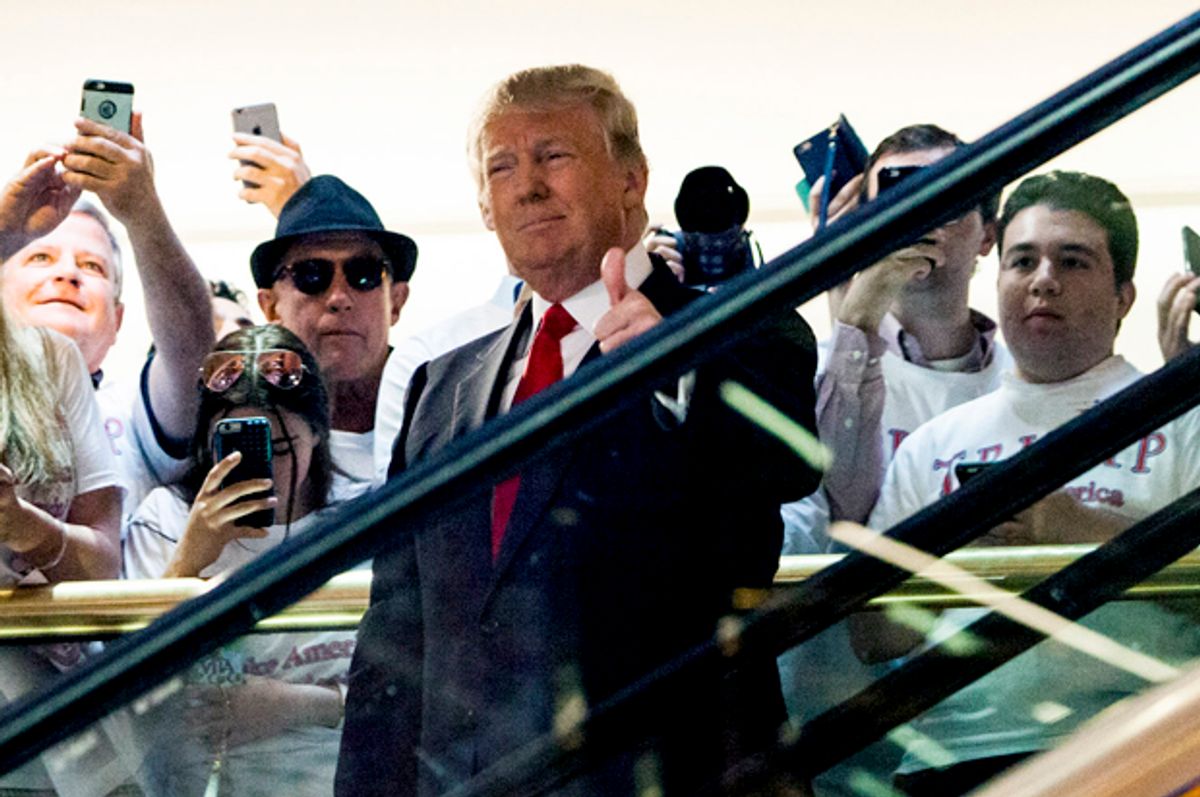 “That is some group of people. Thousands!”

The people around me in the press pen laughed at Donald Trump's opening remark. It was June 16, 2015, and Trump had just made his grand entrance by, of all things, descending an escalator and taken the stage in Trump Tower to kick off his campaign for the presidency. People wearing “Make America Great Again!” T-shirts leaned over the railings that lined the atrium for several floors above our heads.

It was a good-sized crowd but nowhere close to “thousands” of people. Hence the laughter, which had an edge to it — as if the New York media, with its decades of experience watching Trump bullshit his way through the universe, were saying, “There he goes again.” That some of the crowd later turned out to have been paid to attend the rally was probably the least surprising news of the day.

Later on, people asked me if Trump’s comments about Mexico sending rapists over the border had been the craziest moment of his speech. In truth, it didn’t stand out at the time. Re-watching it now, I see why.

The comment that set the tone for the campaign came two minutes in: “When Mexico sends its people, they’re not sending their best,” Trump said. “They’re sending people that have lots of problems. And they’re bringing those problems with us. They’re bringing drugs; they’re bringing crime. They’re rapists.”

Trump then spent the next 43 minutes spewing out such a blizzard of xenophobia, racism, braggadocio, lies and talking points cribbed from every sewer of right-wing media that, by the time it ended, it left my entire soul numb, as if someone had injected 10,000 cubic centimeters of valium directly into my spine. Sixteen and a half months later, that numbness has not completely abated.

Two minutes into Trump's bid for the White House, and we were on a rocket sled screaming full speed straight downhill on a ride that is still going. The campaign almost literally opened with “Mexico is sending us rapists” and is now ending with The Washington Post, the paper that broke open Watergate, knocking down rumors that the Democratic Party candidate and her inner circle practice Satanism.

In between we have gathered enough material to keep media critics, political scientists, journalists and conspiracy theorists busy for decades — not satirists, though. Christopher Buckley on a truckload of mescaline could not have dreamed up a nuttier campaign novel than the one we are living through.

We have also witnessed what might very well turn out in the long run to be the death of the Republican Party. The GOP in the Obama era had already gone full-blown nihilist, becoming a group of insurrectionists with no desire to govern and no thoughts beyond the reflexive impulses that fire off deep within their collective lizard brain at the mention of any type of slightly liberal governance, whether it be helping poor people access affordable health care or raising the top marginal tax rate a measly couple of points. The party leaders have become so captive to their own id, so terrified of their angry white base, that they have mostly found it easier to fall in line behind an obvious charlatan who has dragged out their dog-whistle racism into the light, beaten it to death and replaced it with a tanker fleet's worth of air horns.

As someone who had written about modern conservatives and their insane, paranoid, ranting hypocrisy and myopia for some years prior to this campaign — and had spent even longer reading and studying right-wing media — I didn't think I could hold a lower opinion of the Republican Party than I had. Which is partly why I assumed Trump would flame out before the primary voting began. I simply assumed (for no reason really other than an obviously misguided optimism) that by even seriously entertaining Trump’s candidacy, the GOP must have hit rock bottom.

Whoops. No, there were layers upon layers of rock still to tunnel into. And there are even more layers to go. There are striated depths of whole geological eras yet to be plumbed.

Of course no one knew on the day of Trump’s announcement just what we were getting into, and I doubt even those who rightly predicted he could win the nomination knew the depths to which we were about to sink.

No, on that day Trump was one more con man joining what had become a quadrennial exercise in grifting: the chase for the Republican Party’s presidential nomination. Over the last few cycles, the GOP primaries had become a moneymaking venture, a way to sell books and boost speaking fees. That Donald Trump, an attention whore who would slap his name on the side of a dachshund if he thought he could charge it a licensing fee, should want a piece of the action made perfect sense.

Which is why I had taken the train into New York to attend the announcement — ironically from Bridgeport, Connecticut, a city where P.T. Barnum lived for decades, served as mayor and civic father and is now buried. It was a spectacle, and I had someone who would pay me to write about it and nothing else to do.

It is nearly impossible to put into words just how enervating it has been to write about this long, nightmarish collapse of political norms and decency every day since then. How exhausting and anxiety provoking to view every single moment of racism, nativism, anti-Semitism, misogyny aimed at yourself and your loved ones and your countrymen by your fellow countrymen — and to still get up the next day and bear witness to it all over again.

America has survived worse. I think it can survive Trumpism. But then again I've already been wrong about Trump once.