The year democracy broke — and how we got here 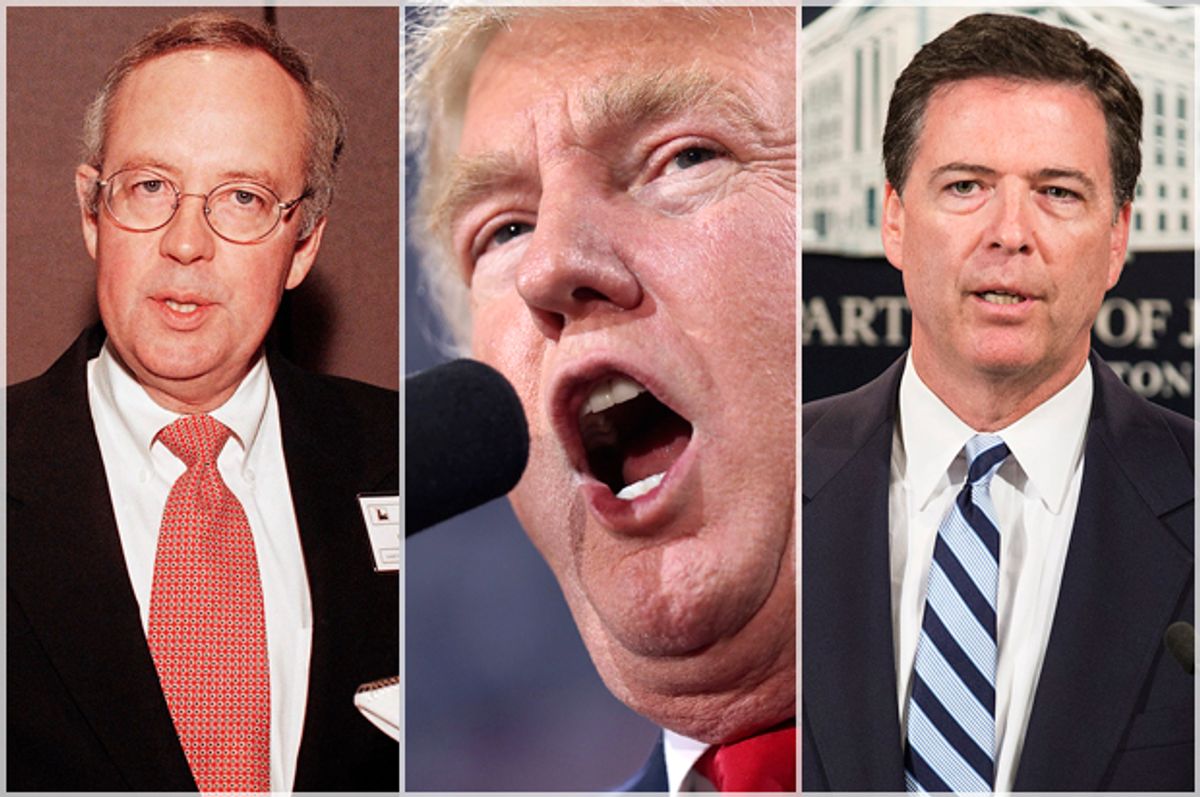 On Oct. 28, with Donald Trump trailing badly in the polls, James Comey, the FBI's director, violated Department of Justice policy and drastically altered the trajectory of the 2016 election in its closing days. His letter to Congress, which should live in infamy forever, was all smoke and no fire — as he publicly admitted nine long days later. But it wasn’t the first time the justice system has been hijacked for a hit job on Bill and Hillary Clinton. Indeed, it’s happened so repeatedly, it’s hard to keep track.

The first two times were in 1992, when Bill Clinton was first running for the White House against George H.W. Bush. At least the justice system was in better shape back then. A Republican U.S. attorney prevented one of the dirty tricks from going public, and although the other accusation leaked out, the FBI refused to investigate, and it ultimately proved more damaging to Bush than to Clinton. Both dirty tricks were widely recognized for what they were.

The fact that Comey’s letter has had such a different impact reflects a much larger, more ominous truth: America’s political system has undergone a severe erosion of its governing norms that now threatens its very essence.

Things have gone so far that on Nov. 1, Time’s politics editor Ryan Teague Beckwith tweeted out a list of some 23 “political norms that have been broken in 2016.” The largest number by far referred to Trump and ranged from the downright silly — “not playing songs with poor messaging at rallies (like 'You Can't Always Get What You Want')” — to the deadly serious, such as:

But to me, the most serious of these came from other, non-Trump sources:

Missing from Beckwith’s list were two other equally serious norm violations: threatening to impeach a president before he or she even takes office and an unprecedented increase in voter suppression efforts, which since 2010 have risen to a level not seen since around 1900, when Southern states moved to massively disenfranchise black voters.

Given how much we’ve obsessed over Trump this cycle, it’s sobering to reflect that none of these last five norm violations came from the Republican nominee, though he certainly helped in stoking them. Beckwith was right to point out that norm violations can be found everywhere this year, but these more serious ones belong in a class by themselves.

The refusal to accept election results in a democracy is a norm violation unlike any other. Taken to its logical extreme, it will destroy the country — as the Confederate states attempted to do in response to the election of President Abraham Lincoln in 1860. What members of the GOP are contemplating now — accelerated and intensified by Trump but not caused by him — is precisely such a violation: You can vote for whomever you want (if we let you), they say, but only a Republican will be allowed to rule. If we can’t defeat the opponent with dirty tricks before the election, we’ll cripple — if not hound the Democrat from office completely and perhaps throw our rival into prison.

What we’re seeing now, in one sense, is an example of what Yale political scientist Juan Linz warned about in 1990: the perils of a presidential system, where — unlike in a parliamentary system — the president’s claim to democratic legitimacy can be challenged by a legislature controlled by the opposition and bring the whole system to the brink of collapse.

It can also be seen as an intensification of a process when Republican senators staunchly refused to let President Barack Obama appoint a new justice to the Supreme Court, as I described for Salon in February. This was an example of what Mark Tushnet has called “constitutional hardball”: political claims and practices that are within the letter of the Constitution but in noticeable tension with the way it's normally understood. The Constitution is not, as the Founding Founders had hoped, “a machine that would go of itself.” It requires the consent of the governed specifically in the form of shared moral norms about how it should work. Those norms can change over time.

He went on to say, “The concept of constitutional hardball does seem to describe a lot of recent, that is, post-1980, political practices. The reason, I believe, is that we have been experiencing a quite extended period of constitutional transformation.”

As I noted in that Salon story, there’s an irony here: "Those trying to transform the constitutional order call themselves ‘conservatives,' even as they drive the process of striving for radical constitutional transformation."

But also, I argued, they had an even deeper problem:

[F]or whatever reasons, conservatives and Republicans have been unable to clearly formulate the constitutional order they wish to achieve, beyond simply keeping Democrats out of power. If they have the White House, they’ll make it as powerful as possible. If they don’t, they’ll cripple it. This is not a recipe for a constitutional order, it’s a recipe for constitutional disorder — and incoherence in terms of defending it. And they’re only getting better and better at it over time.

I wrote that in February, when Republicans were still pretending they would be fine with letting the new president appoint former justice Antonin Scalia’s replacement. Now, not so much. Adding insult to injury, they’re doing this all in the name of high principle — no matter how garbled or incoherent that principle may be.

When they refused to let Obama appoint a Supreme Court justice, the high principle was “let the American people decide!” — as if the 2012 election had not taken care of that already. Now the principle is “don’t!”  The only consistent “high principle” here is the principle that no Democratic president will ever be allowed to make a Supreme Court appointment. This isn’t just a recipe for constitutional disorder; it’s a recipe for the death of American democracy.

Which, in part, is why it’s so necessary to paint the Clintons as heinous criminals — so evil that any law protecting them, even the Constitution, must be evil, too. The incoherent rage that the American right can call forth from those properly primed serves as the ultimate distraction from how incoherent the right’s ideology and policy positions actually are.

The Clintons were especially heinous for conservatives because they were not the liberal extremists right-wingers that believed them to be. So to fill that void, a whole farrago of imaginary narratives was constructed over time, mostly woven around a few threads of much more innocent fact. Yes, Vince Foster died violently. No, Hillary Clinton didn’t have him murdered.

Yes, the Clintons lost $100,000 in the Whitewater partnership with James and Susan McDougal. No, they did nothing nefarious and had nothing to do with McDougal’s later ownership of a failed savings and loan — the tenuous thread used to investigate them for most of Bill Clinton’s presidency.

So it is now with Hillary Clinton’s emails. Did she make some bad decisions? Yes. A vast criminal conspiracy? Not so much.

That’s the background against which Comey’s norm violation occurred. Clinton’s emails had dominated the election cycle more than any other single topic. A recent survey found that this so-called scandal received three times as much coverage in evening network news than all issue stories combined.

With such wildly disproportionate and repetitious coverage, is it any wonder that people think Clinton must be guilty of something? Indeed, a recent Politico/Morning Consult poll found that 82 percent of Republicans thought the Clinton email controversy was "worse than Watergate,” as Trump has repeatedly charged. Yet as Matt Yglesias pointed out in a recent Vox explainer, there’s just no there there. He knocked down a whole series of misconceptions, but regarding Comey’s leak, here’s what’s most significant:

[E]ven if the [Anthony] Weiner laptop emails aren’t simply client-side copies of the exact emails the FBI already has, there is essentially no chance it will change the ultimate verdict. The reason Clinton isn’t getting locked up is that there was no malign intent. Finding another email with classified information on it won’t change that conclusion.

Somehow, Comey failed to spell out this basic fact in his Oct. 28 letter to Congress, which only compounded his grievous error in sending the letter in the first place. If, as seems plausible, he was trying to forestall leaks by rogue agents, his letter should have clearly explained that there would be no new criminal charges, regardless of what turned up in the emails.

There is, however, at least some connection to Watergate — but not the one Republicans imagine. In the wake of Watergate, the Office of the Independent Counsel was created, as part of an act that needed to be periodically reauthorized. In 1992, responding in anger to the Iran-contra investigations, a Republican filibuster caused the statute to lapse.

The Whitewater investigation began in early 1994, when Attorney General Janet Reno appointed Robert Fiske, a Republican former U.S. attorney, to lead the investigation. That was not what congressional Republicans were hoping for — so they decided the independent counsel law wasn’t so bad after all and agreed to let it be reauthorized. Bill Clinton signed the reauthorization on June 30, the same day that Fiske released an interim report concluding that Vince Foster had committed suicide, and that Clinton and White House officials had not interfered with an earlier investigation — findings that enraged conservative activists aiming to bring down the Clintons.

Reno recommended that Fiske be appointed to the new position to continue his work, but conservatives intervened, and got one of their own appointed — Kenneth Starr, a former judge with no prosecutorial experience — to take Fiske’s place, as described by investigative journalist Robert Parry. The appointment came from a three-judge panel from the D.C. Court of Appeals, headed by Judge David Sentelle. He removed Fiske after having lunch with two of Clinton's harshest critics, Republican North Carolina senators Lauch Faircloth and Jesse Helms.

But Sentelle himself held his position because of an irregular appointment by Chief Justice William Rehnquist. In 1992, Rehnquist had removed a Republican senior judge, George MacKinnon, who had headed the panel for six years and had angered conservatives by appointing Lawrence Walsh to investigate the Iran-contra scandal, which he did with great vigor, despite being a Republican himself.

Rehnquist replaced MacKinnon with Sentelle, then in his 40s, and in doing so ignored a provision in the Ethics in Government Act of 1978 that gave priority to senior and retired judges, on the basis that they were assumed to be less ambitious and politically motivated than younger judges.

In short, everything about Starr’s appointment itself was irregular. Norms were violated left and right. Starr’s investigation didn’t just turn into a travesty over the next four years, as it leaked false or misleading information like a sieve and produced a final report that resembled second-rate pornography. It was a travesty of justice two years before it even began. But the Starr affair did accomplish three things: It established Clinton hate as a guiding conservative obsession that’s still going strong to this day, it politicized the investigative culture and it deeply eroded the norms of an earlier, more sober and more responsible era.

That is the backstory of the Clinton email scandal and the scandalous way that the FBI has mishandled it. If, as expected, Republicans set out to impeach a President Hillary Clinton from the moment she’s sworn in, it will be the backstory of that travesty as well.