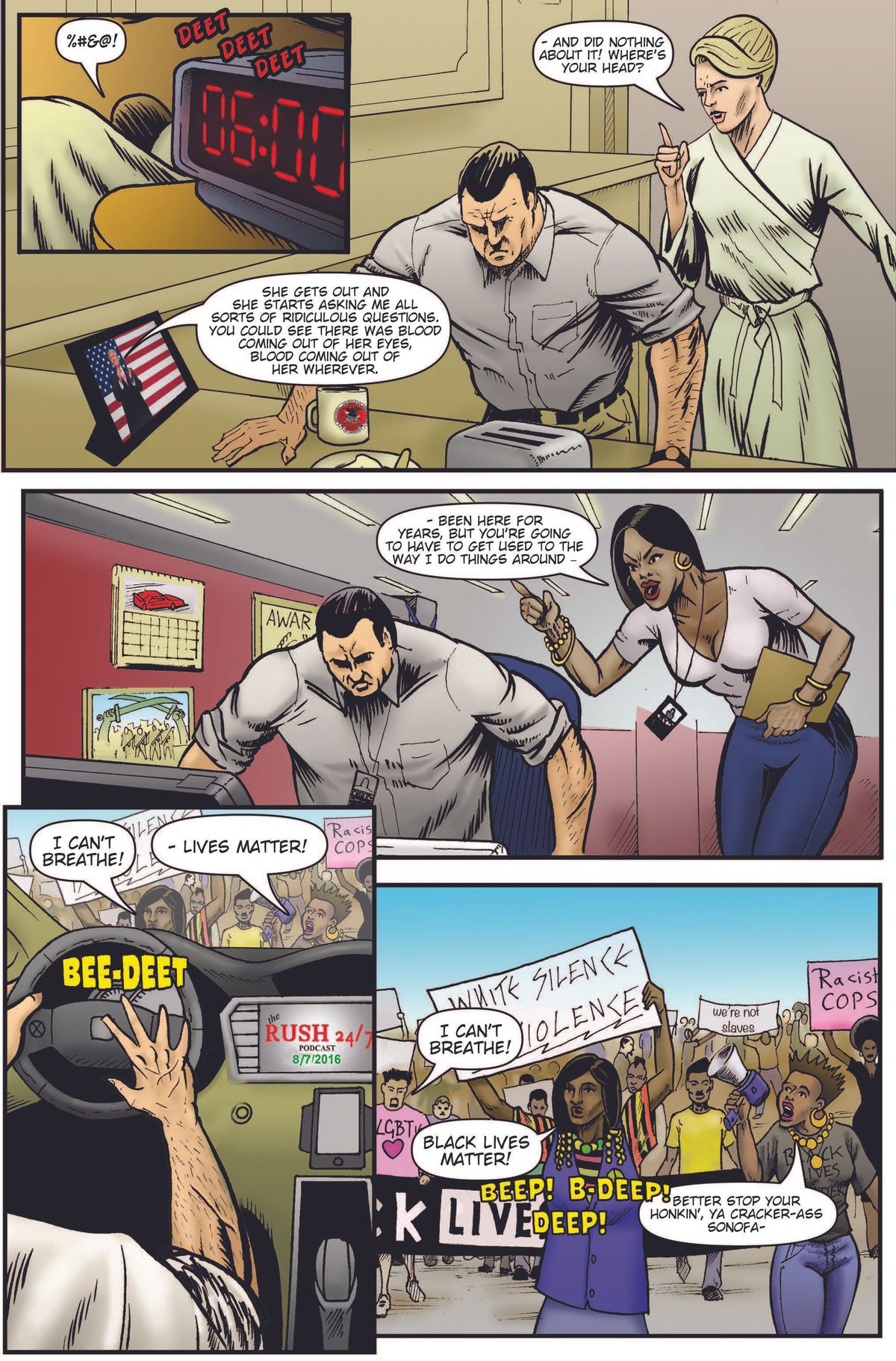 The 2016 election has birthed a new superhero, of sorts: He's a working stiff by day and asleep at night because he has to get up at 6 a.m. and work a dead-end job.

Michael L. Frizell — the director of student learning services at Missouri State University by day and a prolific comic book writer by night — together with artist Nathan Webb, created an unconventional, unnarrated comic book for Storm Media (formerly Stormfront Media and  no relation to the online forum for white supremacists).

From the perspective of an undecided, seemingly right-leaning voter and veteran from Kansas, "Donald Trump: Road to the White House" tells the story of the Republican presidential nominee's campaign — from his descent on the Trump Tower elevator to his "locker-room talk" defense of a leaked audiotape in which he brags about sexually assaulting women.

Other factors that influence the white male protagonist's decision to back Trump: Black Lives Matter protesters block his commute home while he's trying to listen to conservative talk-show host Rush Limbaugh. His son is gay and emo. At work, he has to answer his new bosses — a black woman he can't stop leering at and a younger guy sporting earrings.

His wife nags him and won't have sex with him — forcing him to stare longingly at photos of Ivanka Trump. His neighbor looks suspiciously like "the Dude" from "The Big Lebowski" and votes for Democratic candidates Bernie Sanders and Hillary Clinton. A black paperboy has an inaccurate throwing arm.

The story often relies too heavily on aggressive racial and religious stereotyping. And attempts to resolve the main protagonist's prejudices — a scene when he and his Muslim and black co-workers drink at a local sports bar and bond over Chiefs fandom and his hinted extramarital romance with a Black Lives Matter activist — aren't sufficient.

In 25 pages, the protagonist — if he can be called such — has no dialogue. The comic book's narrative is advanced largely by voiceovers, news report excerpts and even fake news from various media outlets, which have played an outsize role in this year's presidential election.

Storm Entertainment has made three comics on Hillary Clinton over the last eight years and she even signed one of them. The latest was released in March about her run for the White House.

Find an excerpt below, via Storm Entertainment: