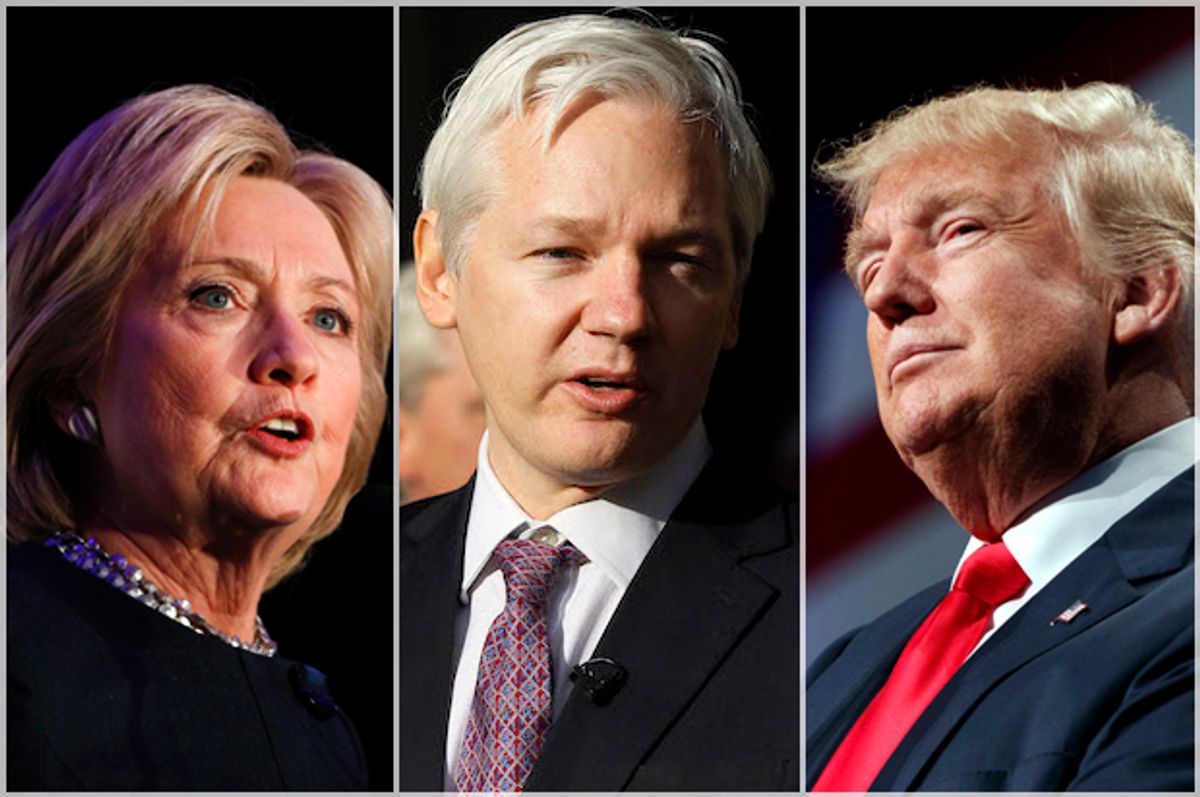 WikiLeaks founder Julian Assange released an Election Day statement criticizing both Hillary Clinton and Donald Trump, and condemning unsubstantiated "McCarthyite" accusations that the whistleblowing organization is a tool of the Russian government.

"The Democratic and Republican candidates have both expressed hostility towards whistleblowers," Assange said, referring to Hillary Clinton and Donald Trump.

He emphasized that WikiLeaks' goal is to defend "the public’s right to be informed," writing, "irrespective of the outcome of the 2016 US Presidential election, the real victor is the US public which is better informed as a result of our work."

The WikiLeaks editor-in-chief also reaffirmed his organization's impartiality, and denounced what he called a "number of false narratives about Wikileaks’ motivation or sources."

Documents from the Clinton camp have been released by WikiLeaks "not due to a personal desire to influence the outcome of the election," Assange said, but rather because "we have not received information on Donald Trump’s campaign, or Jill Stein’s campaign, or Gary Johnson’s campaign or any of the other candidates."

In the statement, Assange noted that he spoke at the launch of the campaign of the Green Party presidential candidate, Jill Stein. He said this was "because her platform addresses the need to protect" whistleblowers.

"This is an issue that is close to my heart because of the Obama administration’s inhuman and degrading treatment of one of our alleged sources, Chelsea Manning," Assange continued, referencing the U.S. Army whistleblower, who is serving 35 years in prison.

"But WikiLeaks publications are not an attempt to get Jill Stein elected or to take revenge over Ms Manning’s treatment either," he added.

Assange has been stuck in Ecuador's embassy in London since the South American country granted him asylum in 2012. A United Nations working group said this February that Assange is being arbitrarily detained, should be freed and is due compensation for his hardship.

Salon interviewed Assange after the U.N. working group made its decision. In the interview, the WikiLeaks editor criticized the foreign policy of the candidates in the Republican and Democratic primaries, including both Hillary Clinton and Bernie Sanders.

Despite the legally binding U.N. decision, Assange has continued to endure relentless attacks from prominent politicians and media outlets. In this election cycle in particular, Clinton's supporters have repeatedly accused Assange and WikiLeaks of covertly supporting Donald Trump and serving as tools of Russian president Vladimir Putin.

The accusation that Assange is a fan of Trump ignores his own previous statements. In a July interview with the independent news outlet Democracy Now, Assange compared a choice between Clinton and Trump to making a choice between "cholera or gonorrhea."

In his Election Day statement, Assange likewise strongly rejected the rumor that he is working for Russia, likening it to a form of neo-McCarthyism. "In a tactic reminiscent of Senator McCarthy and the red scare," he wrote, "WikiLeaks, Green Party candidate Stein, Glenn Greenwald and Clinton’s main opponent were painted with a broad, red brush."

"The Clinton campaign, when they were not spreading obvious untruths, pointed to unnamed sources or to speculative and vague statements from the intelligence community to suggest a nefarious allegiance with Russia," Assange added. "The campaign was unable to invoke evidence about our publications — because none exists."

Major media outlets, including the U.S. newspaper of record, have echoed this rumor. When The New York Times published an article trying to link WikiLeaks to Russia, without any strong evidence, WikiLeaks harshly criticized it, releasing a statement that pointed out numerous falsehoods in the piece.

In his election day statement, Assange reaffirmed WikiLeaks' commitment to sharing with the public material that "is of political, diplomatic, historical or ethical importance."

He noted that WikiLeaks had obtained information that met these criteria that related to the campaigns of Bernie Sanders and Hillary Clinton. "It would be unconscionable for WikiLeaks to withhold such an archive from the public during an election," Assange said.

"To withhold the publication of such information until after the election would have been to favor one of the candidates above the public’s right to know," he continued. Assange pointed a finger at the Times, writing, "This is after all what happened when the New York Times withheld evidence of illegal mass surveillance of the US population for a year until after the 2004 election, denying the public a critical understanding of the incumbent president George W Bush, which probably secured his reelection." (He added, "The current editor of the New York Times has distanced himself from that decision and rightly so.")

Assange noted that WikiLeaks has published more than 100,000 documents related to the 2016 U.S. election. He argued that this has greatly contributed to the public good.

"Millions of Americans have pored over the leaks and passed on their citations to each other and to us," Assange said. "It is an open model of journalism that gatekeepers are uncomfortable with, but which is perfectly harmonious with the First Amendment."

"The First Amendment unapologetically nurtures the democratization of knowledge," he continued. "With the Internet, it has reached its full potential."

Assange emphasized that WikiLeaks, which just celebrated its 10th anniversary, has a "pristine record for authentication."

WikiLeaks' key publications on the 2016 election, he added, "have even been proven through the cryptographic signatures of the companies they passed through, such as Google." Assange quipped, "It is not every day you can mathematically prove that your publications are perfect but this day is one of them."

"In the end, those who have attempted to malign our groundbreaking work over the past four months seek to inhibit public understanding perhaps because it is embarrassing to them – a reason for censorship the First Amendment cannot tolerate," Assange concluded. "Wikileaks remains committed to publishing information that informs the public, even if many, especially those in power, would prefer not to see it."