In Donald Trump's cabinet from hell, corporatism and cronyism run rampant — and Sarah Palin may be there, too 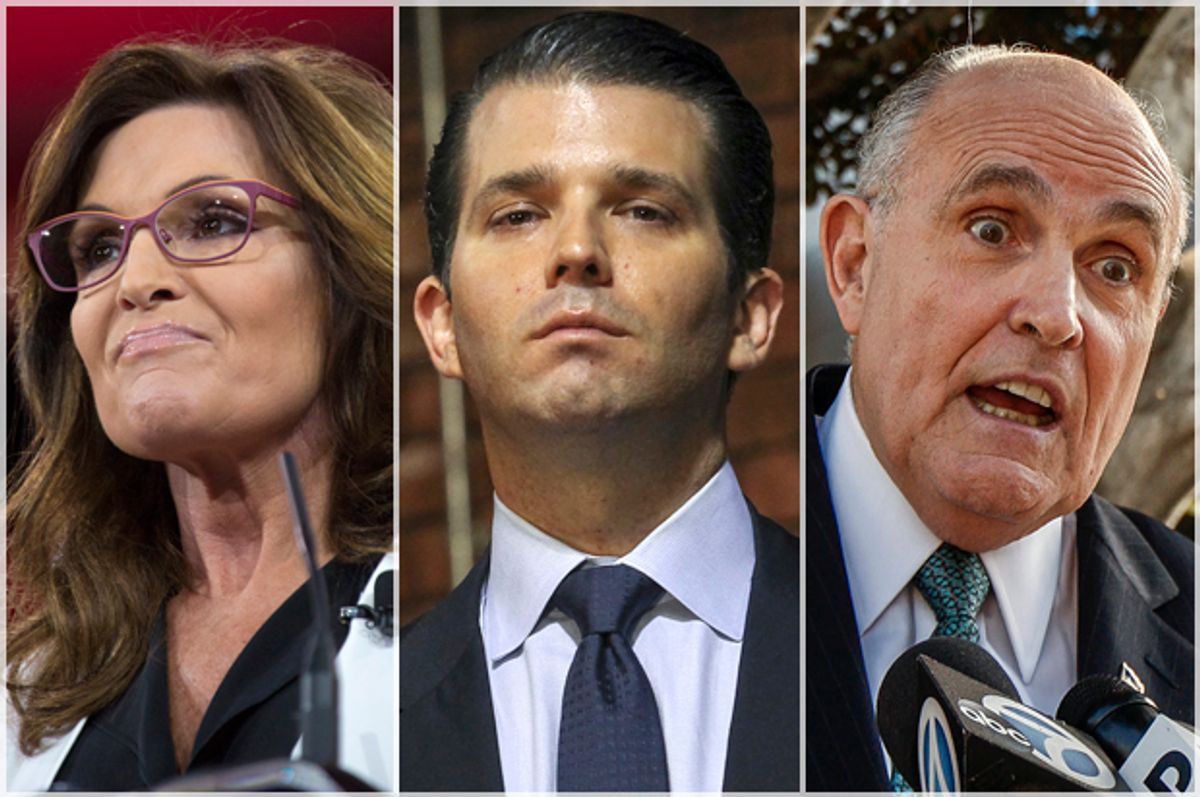 Perhaps unsurprisingly, Trump's rumored Cabinet picks include a mixture of campaign confidantes and titans of industry. Below is a list of some likely and out-of-left-field prospects for various government departments whose names the Trump campaign dropped at one point or another:

Newt Gingrich: The former House speaker proved himself a rabid Trump surrogate and once was on the short list of potential vice presidential picks.

Steve Mnuchin: Trump's finance chair spent time at Goldman Sachs and as a Hollywood producer before hitching his wagon to Mitt Romney in 2012 and eventually Trump in May.

Office of the Attorney General

Rudolph Giuliani: Like Gingrich, the former New York mayor and former associate attorney general has been a tireless, if controversial, surrogate for Trump on the trail and in the media.

Chris Christie: "Though scandal-plagued," the New Jersey governor "is ostensibly the head of Trump’s transition efforts, giving him a key role over personnel decisions" — though he has "drifted from the campaign" in recent weeks, according to NBC News.

Pam Bondi: Politico called the Florida attorney general — who has been implicated in a scandal involving Trump University — "another possibility," though questions have been raised, as Fortune wrote, "whether Trump’s $25,000 contribution influenced Bondi’s decision not to investigate his notorious seminar school."

Retired Lt. Gen. Michael Flynn: Trump's national security adviser was fired from his post as head of the Defense Intelligence Agency in 2014, which he attributed to his hawkishness.

Sen. Jeff Sessions: The Alabama Republican took on the transition efforts from Chris Christie after the New Jersey governor "drifted from the campaign." Sessions was also the first senator to endorse Trump for president in February.

Department of the Interior

Forrest Lucas: An anonymous source "briefed by the Trump campaign" in September told Politico that the Lucas Oil co-founder is a "front-runner" for the job, as the president-elect gathers a "more business-friendly and business experience-heavy cabinet"

Donald Trump Jr. or Eric Trump: In a January interview with Petersen's Hunting, the Republican candidate said "ideally" one of his two boys would end up heading the department "because they are hunters and anglers and members of key conservation and Second Amendment groups," according to The Washington Examiner.

Sarah Palin: In January, Trump said in a phone interview with NBC's "Today Show" that former presidential candidate Sen. John McCain's former running mate "could play a position if she wanted to" in his administration. Palin later responded that she'd be interested in heading the Department of Energy but, "If I were head of that, I'd get rid of it."

Harold Hamm: The billionaire oilman from Oklahoma helped craft Trump's flimsy energy policy. The two are, of course, of the "drill baby, drill" mindset. Hamm had a prime-time speaker slot at the Republican National Convention in July.

Myron Ebell: The director of the Center for Energy and Environment at the Competitive Enterprise Institute is currently heading Trump's transition team for the Environmental Protection Agency. Ebell is also a staunch climate change denier who has faced scrutiny for accepting money from industrial polluters.