We deserved this, America — and now we have no idea what the hell to do about it 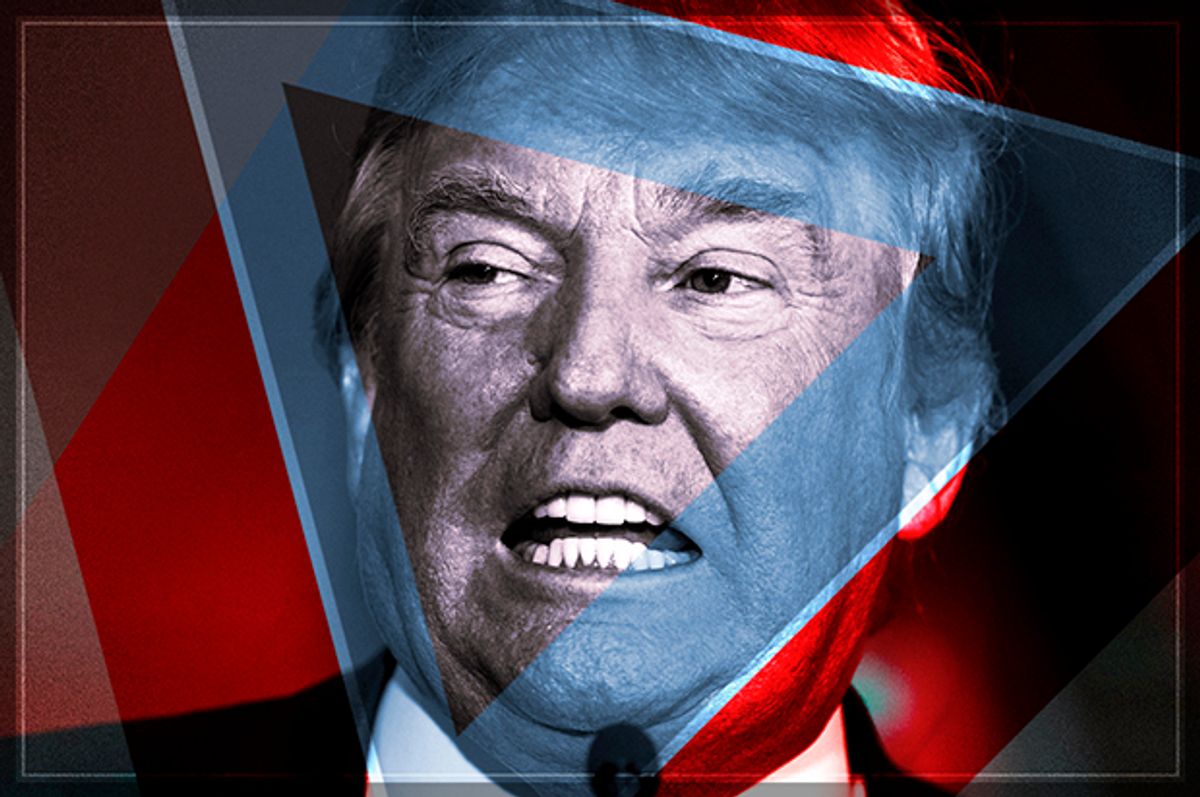 Over the course of the 2016 presidential campaign, I’ve come back many times to the final stanza of Matthew Arnold’s 1867 poem “Dover Beach,” with its memorable images of seeking personal solace amid social and political chaos. That’s something we all need, no matter where we fall on the ideological spectrum, and perhaps never more so than at this extraordinary turning point in American history.

Ah, love, let us be true
To one another! for the world, which seems
To lie before us like a land of dreams,
So various, so beautiful, so new,
Hath really neither joy, nor love, nor light,
Nor certitude, nor peace, nor help for pain;
And we are here as on a darkling plain
Swept with confused alarms of struggle and flight,
Where ignorant armies clash by night.

Maybe it’s ironic, in the shocking context of Nov. 9, 2016, that Arnold was an old-school Victorian gentleman and a high-culture snob and his poem was largely meant as a lament over the retreat of religious faith in the face of modern age. Maybe it’s not. Since this has been a day for repentance, confession and self-examination, I will admit that I identify with Arnold’s worldview more strongly than I like to pretend. I would phrase my own lament somewhat differently, however:

Fuck this. Fuck this shit. Fuck this for a game of darts, as my late Uncle Fred would have said. Fuck this country for being so shortsighted and self-centered and bigoted and willfully ignorant, for surrendering to panic and misogyny and delusion and bringing the impossible zombie specter of President-elect Donald Trump to life. Fuck the entire media class for enabling and empowering this nightmarish clown, for treating him as “entertaining” and “addictive” and a “good story.”

Yes, I am looking in the mirror when I say that, although I will add that amid a diversity of voices and opinions, and during a period of major institutional change, the writers and editors at Salon treated Donald Trump as a serious danger from the beginning. We didn’t and perhaps couldn’t do enough to prevent him from becoming president, and for the entire media a long period of serious reflection needs to follow that outcome.

We deserved all this, America — and now we have to figure out what in hell to do about it. I’m not going to waste any abusive epithets, however, on the man who will be the 45th president of the United States, as terrible and as unbelievable as that is. I guess that restraint reflects some lingering respect for democratic norms — a respect our president-elect evidently does not share — even at a moment when it appears American democracy has gone into a death spiral.

At least by tradition, the morning after the election is a time for reflection, negotiation and acceptance, not pointless vitriol. Hillary Clinton and President Barack Obama have both swallowed their pride, and their obvious pain, and played by the rules on Wednesday.

Beyond that, what happened to America in 2016 is fundamentally not Trump’s fault and not even his doing. Essentially, Trump hacked our democracy. With the predatory instincts of a marketing professional, he identified weaknesses in the Republican Party and then in the larger political landscape and exploited them brilliantly. Good for him.

If you look at the guy and consider his background, you could hardly expect him to do otherwise. The cure for America’s unhealthy Trump obsession was always available: Voters could have picked someone else. Most of us kept on thinking that they would finally do so, much in the spirit of Charlie Brown running up to kick that football one more time. Now we’re flat on our backs, as on a darkling plain, gasping in the dust. Lucy took the football and went home.

Those weaknesses Trump was able to exploit resulted from many years or many decades of division, dysfunction and paralysis, going back at least as far as the Reagan revolution of the 1980s and probably to the social and cultural turmoil of the late 1960s. It took a lot of bad things happening over a long period of time to get us where we are today. Like so many others, I spent the small hours of Wednesday morning listening to and trying on numerous theories about what went wrong. It will take months or years to sort it all out, if we ever do. I found many of those first-draft analyses compelling to a greater or lesser degree, but none of them was entirely sufficient.

I think the one thing we can say now is that Trump’s campaign was part of a global wave or a storm system, a complicated and multifactorial phenomenon that almost no one saw coming, even though it was everywhere around us. (Michael Moore, to be fair, did see it coming.) Everyone gets to put a spin on this phenomenon, and almost no argument is entirely untrue.

In my judgment, it’s just as unfair to argue that Trump’s ascendancy is entirely driven by racism and white nationalism, and not at all by worsening economic inequality and dislocation, as to argue the opposite. Those two ideological forces — “whitelash,” in Van Jones’ memorable phrase, and real or perceived stagnation — are not in contradiction, as the history of fascist political movements should make clear. To privilege one over the other is effectively to take sides in an internal debate among liberals and leftists about how much blame falls on the neoliberal-flavored Clinton-Obama Democratic Party for its role in this disaster.

I also don’t think it’s fair to suggest that widespread misogyny (among both men and women, as my colleague Amanda Marcotte argues in this devastating essay) is entirely to blame for Hillary Clinton’s political demise — but those who pretend that wasn’t a major factor are deluding themselves. It has become all but impossible to separate one’s legitimate disagreements with Clinton’s mainstream establishment politics from the vicious sexist caricatures and outrageous lies constructed by her enemies on the right.

She is a divisive and enigmatic figure who is widely perceived as less than trustworthy, a perception that Clinton herself has undeniably abetted at times. But everything about her political persona and political career — including the lens through which we see her and the standards by which we judge her — has been shaped by her unique status as an ambitious and powerful woman, the first serious female contender for the White House.

I have repeatedly suggested that Clinton was precisely the wrong candidate for a moment in which the public was captivated by outsider insurgency — and now she once again finds herself on the wrong side of history, if in a dramatically different way from 2008. But how much has my perception of Clinton, and everyone else’s, been conditioned by a generation’s worth of right-wing hate speech?

Of course it crossed my mind to wonder whether Sen. Bernie Sanders would have done better in that “blue wall” of states across the northern Midwest that fell to Trump on Tuesday night. (After all, Sanders defeated Clinton in Michigan, Minnesota and Wisconsin earlier this year.) But we’ll never know, and it’s pointless speculation; the unknown unknowns in an imaginary Trump-Sanders race are too big to calculate. Vice President Joe Biden, too, may have put away a few bottles of What Might Have Been alcohol-free beer while watching the devastation mount.

But even if it’s clear in retrospect that the Democratic Party tilted the playing field to favor Clinton over Sanders during the primaries, it’s equally apparent that she was the choice of both the party establishment and the Democratic voter base. Whether those two constituencies were fatally disconnected from the changing contours of political reality is an entirely different question.

It’s seductive to view Trump’s shock victory as a generational sneak attack by embittered white elderly citizens and older baby boomers — a “political revolution” led not by Bernie millennials but Myrtle Beach golfers. But the exit-polling data only partly supports that hypothesis and seems to be of dubious value this year anyway. All such one-size-fits-all explanations founder on the self-evident fact that the Trumpian wave is a global phenomenon with many ingredients that has taken different forms in different places. It’s Brexit and it’s Marine Le Pen in France and Geert Wilders in the Netherlands and the Freedom Party in Austria and other things in other countries. Trying to shove it in a box (or a basket!) and sticking a label on it — fascist, racist, Islamophobe, yadda-yadda-phobe — and hoping it will go away is clearly not working.

I don’t claim to have an explanation or a solution. I do know that the country is in deep trouble, and the so-called progressive left has nothing close to a coherent response. Michael Moore’s chilling comments from a couple of weeks ago resound loudly today: He described Trump as a “human Molotov cocktail” that his supporters hoped to use to blow up the system and said that Trump’s election would be “the biggest ‘fuck you’ ever recorded in human history.”

That’s about as clear a summary of what we just experienced as anyone can offer, and I’m happy to join in the chorus: Fuck you, too! While ignorant armies clash by night.