What must it feel like to be President Obama today? 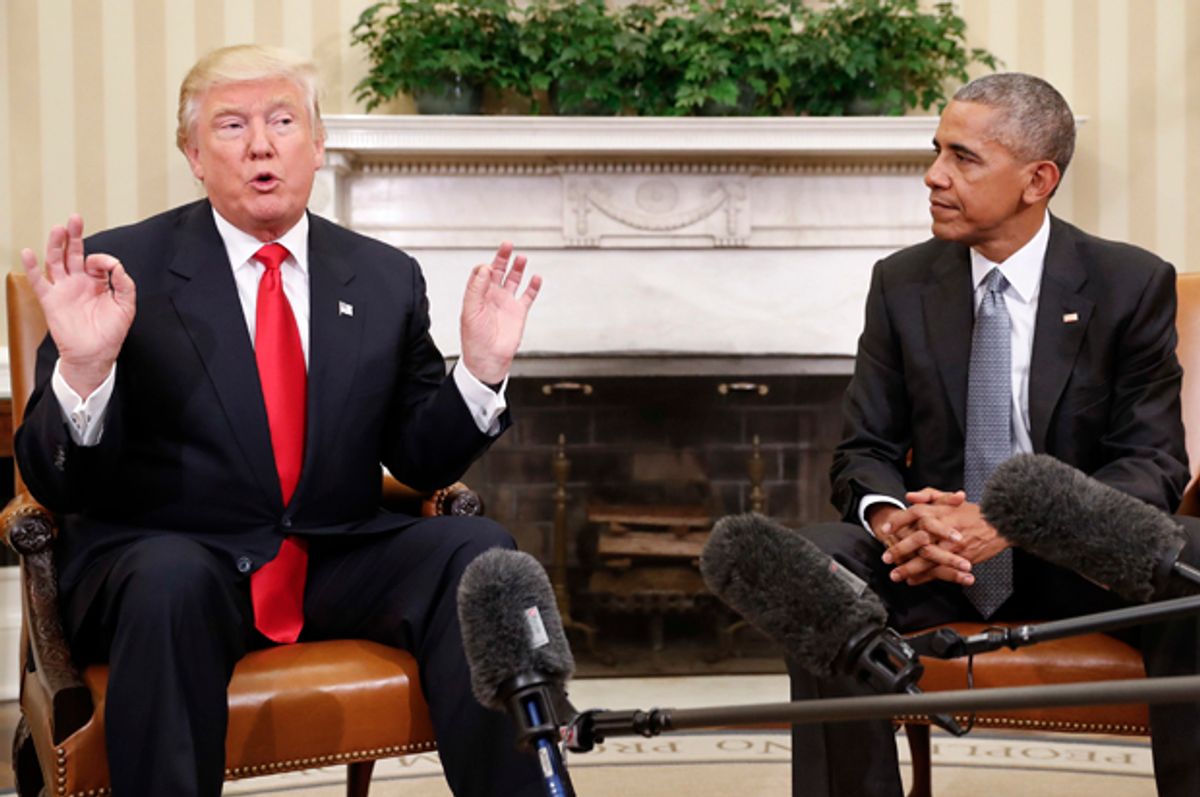 While at least a quarter of the country begins to shrug off their shell shock from waking up on Wednesday to news that their fellow Americans had just elected an authoritarian reality-TV star to be the 45th president of the United States, the current president, his family and staff had to quickly snap back to patriotic professionalism in order to welcome Donald J. Trump to the White House on Thursday.

I, for one, can’t even begin to imagine what that must feel like — to welcome a man who reached the political prominence he had flirted with for years, in part by insisting that the first African-American president is illegitimate. To realize that Trump’s birther campaign succeeded not only in forcing a sitting president to show his papers to a white man who derives his only sense of authority from his wealth but then to also watch as he serves the ultimate humiliation by dismantling your legacy.

Does he regret selecting his former rival to be part of his Cabinet? After all, if Hillary Clinton had only followed the protocols put in place by his administration, then there wouldn’t have been the unprecedented October surprise in the form of a letter by the FBI director, James Comey, that blew up the race in its final days. While Obama was the first president since 1956 to garner 51 percent of the vote twice, Clinton couldn’t beat a Trump campaign that garnered only 47 percent of the popular vote. So, instead of greeting in the Oval Office the first woman to be elected U.S. president, Obama is meeting Trump there for the first time today.

How must he feel?

I still viscerally remember that feeling when the verdict came back not guilty for George Zimmerman in connection to the 2012 death of Trayvon Martin. I was a bridesmaid in New Orleans that hot July Saturday evening and the entire bridal party paused during a rambunctious reception to gather around a cellphone that was live streaming CNN coverage. I had an even more sickening feeling of despair when President Obama choked back tears in his first address to the nation following 2012 the Sandy Hook school shooting. I doubted the hope I had felt the day of Obama’s 2009 inauguration when in 2015, a young white man walked into a Charleston, North Carolina, bible study session and killed all of nine black worshipers. Somehow, democracy in action has felt just as painful this week.

But like so many of us, President Obama just can’t call out black when faced with tragedy.

“Sometimes you lose an argument; sometimes you lose an election,” the president said during his first postelection remarks on Wednesday, encouraging the nation to move forward by embracing President-elect Trump. “I think of this job as being a relay runner. You take the baton, you run your best race and hopefully by the time you hand it off, you're a little further ahead; you've made a little progress,” Obama said.

I know he is putting on a brave face and executing his responsibility of leadership during this transition, but allow me to repeat what he warned would happen to the progress made during his presidency before Trump was elected.

“If we let this thing slip," Obama said. "I've got a situation where my last two months in office are preparing for a transition to Donald Trump, whose staff people have said that their primary agenda is to have him in the first couple of weeks sitting in the Oval Office and reverse every single thing that we've done," the president noted just last week. He knew then and he knows now that everything he spent the last decade attempting to accomplish will be wiped away. How must he feel?

A Trump victory would be "an insult to my legacy," Obama told the Congressional Black Caucus in September. But Clinton’s margin of loss in many states was smaller than the number of voters prevented from voting by new restrictions put in place after the Supreme Court gutted the Voting Rights Act. This is a Supreme Court to whose bench President-elect Trump will be able to appoint a new justice only weeks after taking office.

And Obama has a Republican Senate, led by Mitch McConnell — infamous for his declaration that his only job was to make Obama a one-term president — to thank for that. GOP senators managed only one significant accomplishment in the final year of the Obama era: hijacking a Supreme Court seat for an unprecedented amount of time in order to deny the president his choice. America rewarded Republicans historic levels of obstruction with Republican control of both chambers.

So as the current first lady greets the future first lady who infamously plagiarized her words, it is the Obamas continuing to exude grace and poise even as I imagine them fuming inside that allows me to make peace with the election. Despite Michelle Obama’s reported wishes, the first family will stick around Washington for at least a year after leaving the White House. And while President-elect Trump and Melania outfit the place with gold trimming, Obama will be setting off on an ambitious plan to dismantle the existing redistricting scheme that allows gerrymandered congressional districts to remain in Republican control even as a majority of Americans vote for Democrats.

“If we lose, we learn from our mistakes; we do some reflection. We lick our wounds. We brush ourselves off. We get back in the arena. We go at it. We try even harder the next time,” he said yesterday.

U.S. history has made clear that racial progress in this nation is almost always met with white backlash. Reconstruction was followed by Jim Crow and after the civil rights movement came President Richard Nixon’s Southern strategy. Any surprise that the nation that elected the first black president would then elect the man who insisted that he wasn’t even American?

However he must actually feel President Obama understands that he is still the leader of a divided country and a wounded party. May his words and future deeds help those who need the encouragement to continue the fight with him.