Anger, grief and breaking and entering into Trump Tower: Scenes from the Chicago anti-Trump march

At Wednesday's spontaneous demonstration in Chicago, I witnessed what might be the birth of a protest movement 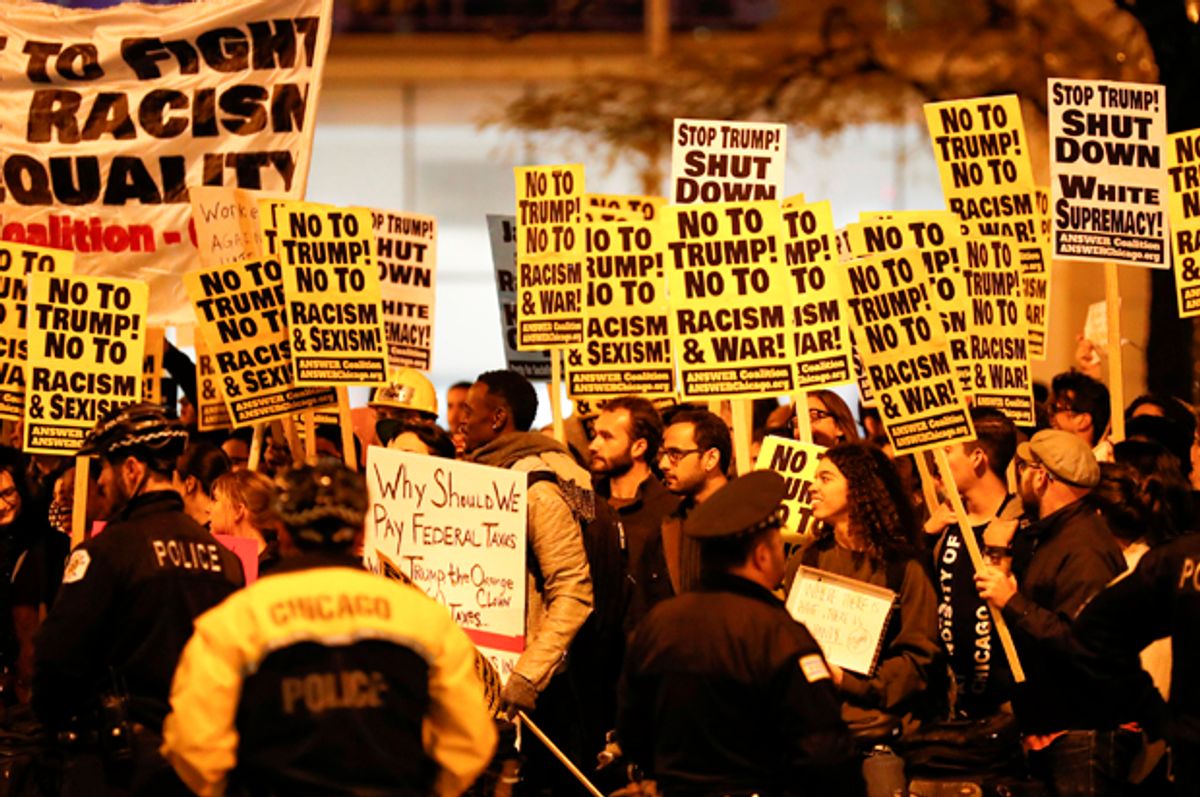 Election Day was exhausting. Watching Republican nominee Donald Trump defeat his Democratic rival Hillary Clinton was not necessarily a surprise, but it was a gut punch of sorts that left me, and I am sure many other Americans, winded and staggering.

It is one thing to know and heed Sinclair Lewis’s wisdom that yes, “it can in fact happen here” and it is another thing altogether to watch as Trump is elected president of the United States of America. In American politics, it would seem that truth is not just stranger but also more frightening than fiction.

The day after Election Day was to be a day off, time for rest and reflection. We may not be able to alter reality through sheer force of will but we can practice self-care.

I slept until the late afternoon. I planned a daylong media detox — I would not watch TV, listen to the radio or use the internet for the entire day. I would walk around downtown Chicago, go to the movies or hit the casino to either play blackjack or find comfort in the mindless repetition of the slots. But as I stood on State Street, I saw a stream of high school and college-age students walking with folded-over signs. I decided to follow them.

As they did in 25 cities across the United States, anti-Trump protesters took to the streets in Chicago as thousands of people converged on Trump Tower Chicago, a monstrous, vainglorious, 98-story monument to greed. More than an eyesore along the Chicago River, it is a dagger in the heart of a solidly Democrat city that stands as a mockery of Barack Obama’s hometown and his legacy as the United States’ first black president. This was not lost on the marchers (or myself) as they vented their righteous rage and anger over the results of the presidential election and the realization that country seems to have turned against people like them.

As I looked around, I saw the Democratic Party’s America.

White college students mingled with black youth from the South and West Sides of Chicago. Gays and lesbians walked among the crowd without fear or shame. Signs demanding that women’s reproductive freedoms be respected and that “Black Lives Matter” were hoisted side-by-side. A group of very fashionably dressed young Muslim women looked up at Trump Tower with concern and disgust. Hispanics and Latinos mocked Trump’s plans to build a wall. A group of young gay black men exuberantly danced in a circle, voguing and twerking as onlookers cheered.

There were older members of the left who had likely marched in the 1960s now protesting alongside young folk who cast their first votes for either Obama in 2012 or Clinton this year. The crowd was also peppered with members of the educated and professional classes, many likely graduates of places like Northwestern University, the University of Chicago or the Art Institute.

This is not Donald Trump’s America. This is what Trump and his basket of deplorables want to erase from American life.

One of the protesters, Nick, held a sign inspired by "South Park" and how it has grappled with Trump's presidential run.

I asked him what comes next? Nick said, “There is 0.1 percent chance that [Trump] does well; it is going to be tough and we need to keep perspective."

I asked him what Trump’s victory made him feel. “Dread,” Robert answered. “What we have in store is a menace: All of the modest progress that we have had to environmental protection, wildlife protection, climate change mitigation, services for vulnerable people and animal protection at large is under serious threat."

Robert is concerned about Trump’s voters and their highway to hell: “This is part of an authoritarian nationalist movement that is global. You are seeing this in European counties, Western countries and here. I hope something unfolds with Trump that disqualifies him from office and that we can build enough energy, a grassroots movement to block him.”

As word of the protests spread via Facebook and Twitter, the crowd at Trump Tower grew. The protesters were boisterous, chanting slogans such as “No Trump! No KKK! No racist U.S.A.!” “The people united will never be divided” and “Si se puede!” Several protesters climbed up streetlights and traffic signals. The air smelled of clove cigarettes and marijuana. It was a protest and a party; music helps to create a sense of community and impart energy to a social movement or political gathering. Today’s anthem was YG & Nipsey Hussle’s rap anthem “Fuck Donald Trump.”

Chicago’s police, who formed a barrier around the streets leading to Trump Tower and carefully monitored the protest, were patient and well-mannered. Many of the police seemed annoyed at having to protect the property of a man whom, if the conversations I overhead were an accurate sample, a good many of them likely did not vote for.

In one of the quiet moments before the crowd surged towards Michigan Avenue, I spoke with Jewels, a young woman whose sign alluded to Trump’s sexual predation by saying, “Grab Me By the Pussy I Dare You!”

Her explanation for why people voted for Trump was reasoned and sober and echoed much of the postelection punditry. “They are mad about the system and want change," Jewels said, "to the degree 'specially the lower and lower working classes feel like the government has not given them the chances it should have given them. But this was definitely not the way to go about it. They voted for him as a middle finger to the system.”

As the marchers crossed Michigan Avenue and headed past the Art Institute and Millennium Park towards Lake Shore Drive I listened to a group of people talk about Trump and how this election was a referendum on white privilege and that white privilege had won.

I approached and asked them about how this happened, “for sure it is backlash and people feel like they have been repressing their racism and homophobia and this is a chance to lash out.”

One of the stories of Trump’s election is how extreme political polarization has broken American politics. At present, Americans do not live near or communicate with those who don't share the same political values and beliefs. We are stuck in silos and echo chambers. For example, I do not know any people who voted for Donald Trump. In a city like Chicago, I am far from unique in that regard.

I shared this worry with members of the group and one person did in fact have an insight into why people would support Trump for president. She has family in Wisconsin and summarized much of what J.D. Vance’s book “Hillbilly Elegy” captured so well, as she explained, “They feel ridiculed by the mainstream media, are afraid of immigrants and terrorists, and their jobs and livelihood have been taken way. And there is a huge opiate epidemic in rural America.”

The protest march eventually worked its way back to Trump Tower. Hours had passed. It was now nine in the evening. The crowd continued to grow.

I spoke with Nathan, an artist and student whose family is from Sierra Leone and Haiti, about why he felt compelled to attend the protest: He said, “Even though black people were still being shot down under Obama on the South and the West Side, honestly I am just mad that the overt racist won the election. He added, “While Hillary is also a racist, all the things the things that Trump promotes will hurt people who aren’t white straight males.”

I asked him what Trump’s presidency would mean for black men specifically and black folks like us. He said, “The one thing we really have to worry about is that the closet racists don’t have to be so closeted anymore because the man running things is someone like Donald Trump."

And how, I asked, Does Trump make us look before the world? “Like a fucking joke,” he replied.

I marched with the protesters until a few minutes past midnight. They continued to move across the city, at one point breaching the basement defenses of Trump Tower before being pushed back by police and security. As the night continued and the most die-hard protesters remained, they had somehow worked their way around to Kinzie Street which runs under the city and allows access to the basement-level service entrance of Trump Tower.

Several of the marchers, a young racially mixed group of three or four men managed to force open the door. Trump's security guards tried to hold it open to no avail. At this moment the crowd roared in approval as other voices, more levelheaded, demanded that they stop trying to get into the building because this was to be a nonviolent protest. Chicago police rapidly appeared. They grabbed the young men and ushered them out. In the quick moment of chaos, it appeared that the police decided that letting them go made more sense than risking a confrontation with a crowd in such a confined and potentially dangerous space.

Many in the crowd were now more exhilarated and excited by their near success in breaching the defenses of Trump Tower. They ran faster down Kinzie Street. I struggled to keep up with them. Those at the head of the march realized that they could circumvent the police by running on a walking path near the Chicago River and entering into the Trump Tower through an alternate, and apparently little-known, entrance.

Dozens of protesters made the gambit. The protesters were were momentarily successful before the Chicago police quickly realized that they had entered a stairwell attached to the Trump Tower. The police quickly cordoned off the area. Tensions rose as a small group of three or four protesters were grabbed by their arms and shoulders by the police. The  young men struggled.

The crowd yelled, "Police brutality! We are recording you Chicago PD! Don't hurt them!" I asked a nearby police officer if the group of people who ran down Kinzie Street would be arrested. He told me, "Maybe, for trespassing." The young men who were restrained by the police were shuffled off to other officers who were waiting nearby. They marched the young men away, presumably to be arrested.

It is not clear if the nationwide protests against Trump on Wednesday are the beginning of a movement or just the necessary exhalations of those who voted for linton (who won the popular vote, by the way). If the anti-Trump protests are to swell into a movement, they must find a way to win over the half of eligible voters who chose not to participate in what turned out to be a generation-defining presidential election.

This will require leadership, organization and resources. Will Trump grind the opposition under his boot heel as he has promised? Or will the voters who chose  Clinton and stood up against Trump and his fascist movement find a way to succeed and by doing so protect American democracy? After marching with the protesters here in Chicago on Wednesday I am hopeful. But I'm also worried because marching alone is never enough to create political change.