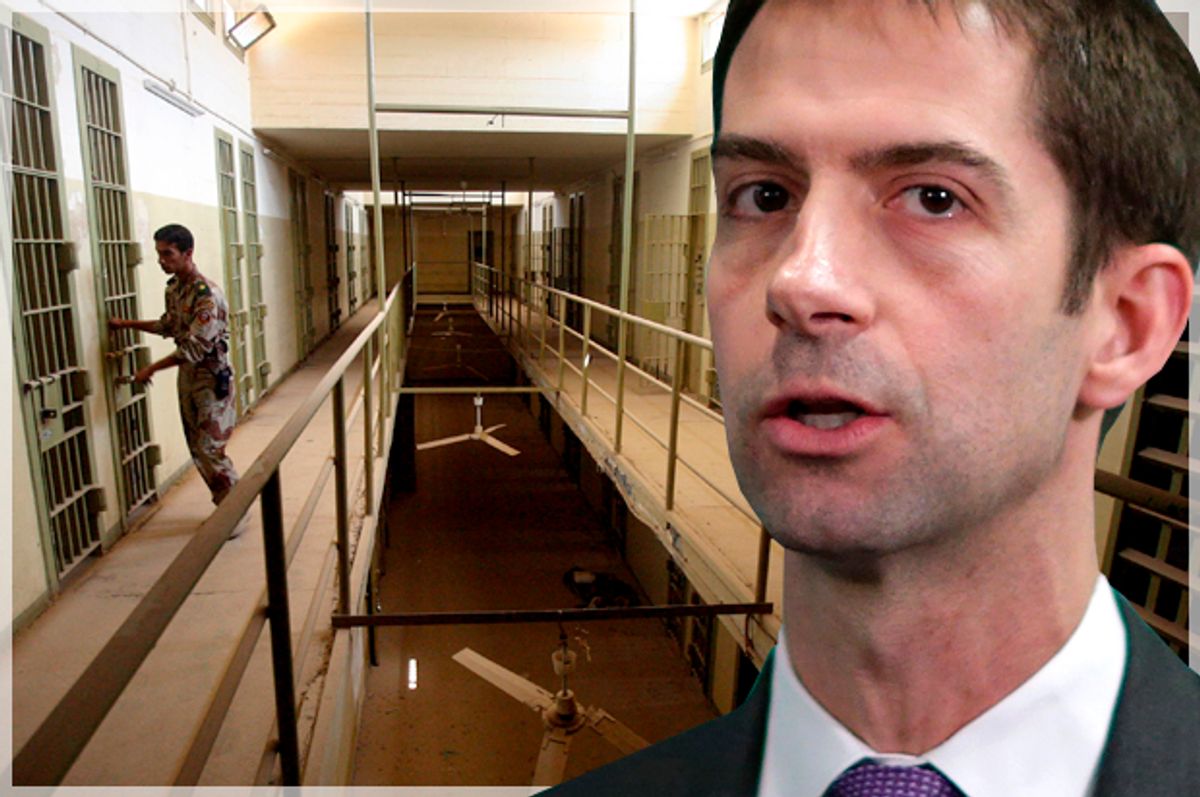 Too much of the current discussion surrounding our nation's massively grievous collective decision to elect Donald Trump as president of the United States centers on imagining ways in which a Trump presidency might not be that bad: He’ll surround himself with smart people who know what they’re doing! The Republicans in Congress will be responsible for checks on the executive branch and prevent him from behaving like the authoritarian he campaigned as! He is secretly an establishmentarian despite all the crazy, bigoted stuff he said that won him the White House!

The only thing accomplished by this sort of mass wish casting is to grant President-elect Trump the benefit of the doubt in defiance of his repeated demonstrations that he is not owed it. So let’s be clear on this point: The Trump presidency will be bad. Indeed, it will be bad in ways that you haven’t even considered yet.

Take, as an example, this segment that aired on CNN yesterday with Sen. Tom Cotton, R-Ark. Wolf Blitzer asked Cotton if he supports Trump’s statement that “torture works” when interrogating terrorism detainees and if he backed Trump’s call to reinstitute waterboarding and “much worse” methods of inflicting pain and distress.

Cotton was totally on board with waterboarding and remained noticeably silent on the “much worse” part of the question. “Waterboarding isn’t torture," he said. "We do waterboarding to our own soldiers in the military,” he added, referring to Survival, Evasion, Resistance, Escape training, which soldiers go through so they can learn what to do if they’re captured and (you guessed it) tortured.

“Radio DJs volunteer for it,” Cotton added, “so I don’t think something people volunteer for is torture.” He was likely referring to Mancow Muller, a shock jock who volunteered to be waterboarded in order to prove it wasn’t that bad and then afterward declared with certainty that it is “absolutely torture.”

Having failed to demonstrate that torture is not actually torture, the senator went on to explain why he is anxious to see torture once again become the official policy of the United States:

If experienced intelligence professionals come to the president of the United States and say, “We think this terrorist has critical information and we need to obtain it, and this is the only way we can obtain it,” that’s a tough call. But the presidency is a tough job, and if you’re not willing to make those tough calls, then you shouldn’t seek the office. Donald Trump’s a pretty tough guy, and I think he’s ready to make those tough calls.

Let’s break this down bit by bit. First off, waterboarding and other torture tactics are currently illegal in the United States. Last year’s National Defense Authorization Act contained language codifying President Barack Obama’s executive order banning the use of waterboarding and other "enhanced interrogation techniques." So the “tough call” Cotton is confident Trump can make would actually be a crime. (Which is not to say that President Trump would refrain from doing it anyway.)

Of course, Cotton could always lead a legislative push to reauthorize torture, although members of his own party (like Sen. Lindsey Graham and actual torture survivor Sen. John McCain) would oppose him on that.

Secondly, it is a well-established fact that torture is a wildly ineffective interrogation technique. Its use dissolves whatever moral center a law enforcement agency might have like acid, impelling the decent officials to depart and leaving behind a collection of sociopaths and incompetents who come to view torture as the primary tool in their interrogation kit. The “ticking time bomb” scenariothat  Cotton alluded to as a justification for employing torture is something that doesn’t really happen outside of TV and movies.

That brings us to Trump himself. Contrary to Cotton’s assessment, Trump does not consider the use of torture to be a “tough call.” Rather, Trump is eager to use torture simply for the sadistic gratification of inflicting pain on an enemy. “Would I approve waterboarding?" Trump said in November 2015. "You bet your ass I would. In a heartbeat. I would approve more than that. It works,” he added. “And if it doesn’t work, they deserve it anyway for what they do to us.”

That right there is why the Trump presidency will be so awful and dangerous. He is immoral and vengeful, and that attitude will filter down through all his policy decisions. He has enablers in the government, like Cotton, who are anxious to turn the United States into a torture state and clearly excited that the president-elect is disturbingly enthusiastic about violating a basic human rights protection. Trump will gravitate to these people and they’ll wallow in their shared corruption, which will spread quickly to other areas of the government.

Just look around you. It’s already happening. Less than 24 hours after the election, a Republican senator was eager to lay out his hopeful vision of returning to the days when we brought international shame and condemnation on ourselves by torturing detainees in our custody.

I can understand the temptation to look at what has just happened and try to be consoled with reassurances that maybe it won’t be as terrible as it looks. But don’t kid yourself, and don’t grant the next leader of the free world the luxury of not taking him at his word. This will all turn out very badly.