Parades for our veterans are nice — jobs are better: Why former servicewomen in particular face so many employment hurdles 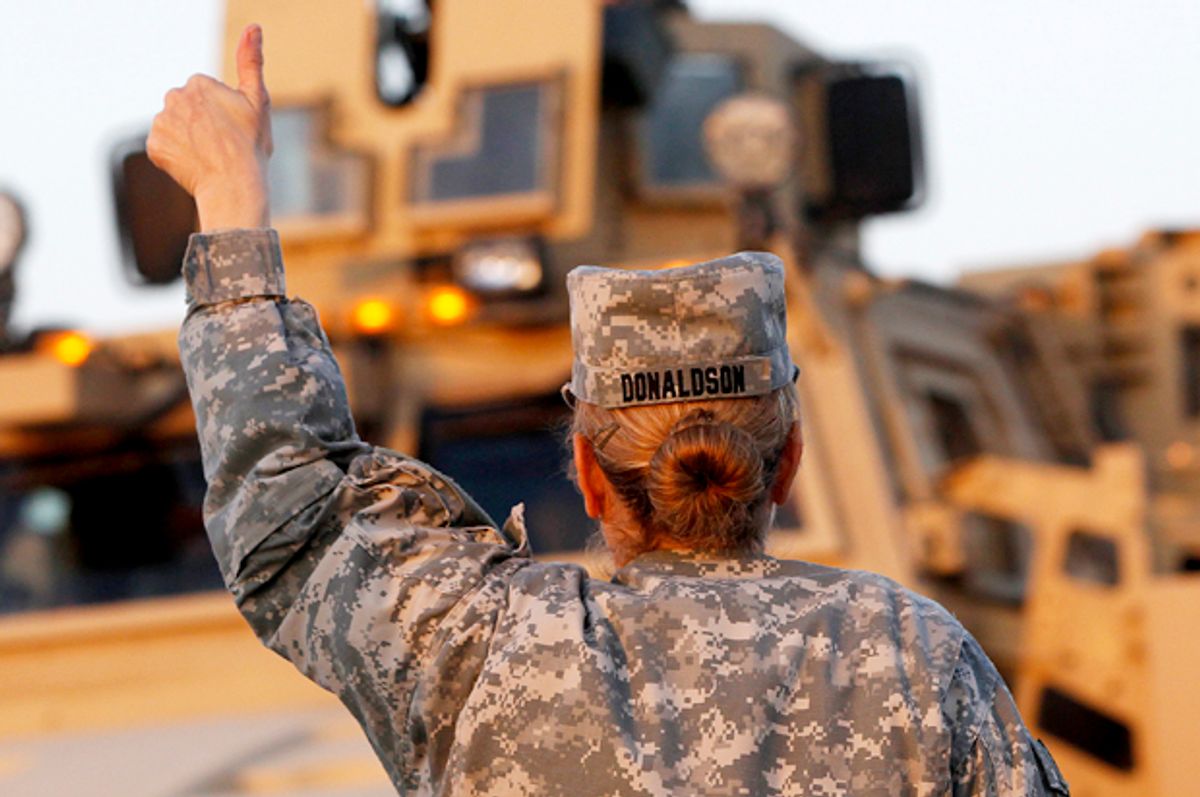 Every year on Nov. 11, America observes Veterans Day. There are local parades and other festivities. Social media is flooded with posts of American flags and military merchandise. Restaurant chains dole out free menu items to current and former military members and their spouses.

But behind all of this patriotic sentimentality lies another longstanding and less pleasant American tradition. Once the uniforms come off, America’s employers discriminate against veterans, especially younger ones, just as they’re struggling with the often-difficult transition from military to civilian life. While recent employment figures have shown improvements, the fact remains that if you’re a young adult who has recently left the military you are significantly less likely to be hired than a nonveteran in your age group. The unemployment issues are even more pronounced among female veterans.

Veronica Witherspoon knows this all too well. After spending eight years in the U.S. Navy as a logistics specialist, including time “down range” in Iraq, the 35-year-old Virginia resident left the service in 2009 and wound up moving in with her mother in Texas. For two years Witherspoon struggled to adjust to civilian life and was surprised, she said, at a lack of opportunity despite her eight years of work experience that would easily qualify her for inventory management, logistics support, invoicing and order tracking — the kind of work that most businesses require.

“I had my days of feeling down and feeling hopeless,” Witherspoon told Salon. “I felt like I served my country in the best way that I could possibly think of, but I couldn’t find a job.” Eventually, Witherspoon confronted the uneasy realization she was one of the tens of thousands of U.S. veterans at any given time who are either living on the street or in shelters. It turns out that for Witherspoon, the effects of serving her country went well beyond her eight years of service.

After bouncing between living with her mother and her ex-husband, Witherspoon wound up in 2011 at Final Salute, a Virginia-based nonprofit that supports more than 2,000 current and former homeless female veterans nationwide. With the help of the organization, Witherspoon found work at a local Wal-Mart, thanks in part to the fact that the company’s recruiter was herself a Navy veteran.

Jaspen Boothe, who founded Final Salute in 2010, said women veterans in particular face inordinate challenges in their return to civilian working life and society that isn’t doing enough to tackle the real challenges faced by many young veterans.

“We’re fed a false narrative about service members,” Boothe, a disabled Army veteran who served in Iraq, told Salon. “We think we will be taking care of them when they become veterans, and that plenty of resources are available. But they’re not. You don’t have the same level of support once the uniform comes off.”

Government labor figures show that finding work is harder for a young recent vet than his or her civilian counterpart in the same age group. From 2009 to 2015, for example, the average annual unemployment rate for veterans aged 18 to 24 was nearly 21 percent compared with 14.7 percent for nonveterans of this age group, according to U.S. Bureau of Labor Statistics data. For veterans aged 25 to 34, the rate topped 10 percent compared with just over 8 percent for comparably aged nonveterans in the same period of time.

Fortunately, greater attention to the issue has recently helped narrow this gap as have 2014 changes to U.S. Department of Labor regulations  that require companies vying for federal contracts to ensure a certain percentage of their employees are veterans.

While the numbers show that younger vets lately have better chances of finding work than vets did in the past, they’re still more likely than civilians to be unemployed. Part of that comes from a longstanding American tradition of viewing younger vets in particular as damaged goods who are suffering from transition anxieties.

“Younger veterans are not getting snapped up by employers,” Amy N. Fairweather, policy director for the veterans advocacy group Swords to Plowshares, told Salon. “There are a number of myths that employer still harbor, that veterans have PTSD, those sorts of things.”

Pop culture doesn’t help matters, she added, as it tends to oversell the more visceral aspects of military service — like movies focusing on the soldier in the muck with a rifle grappling with mental health and anger-management issues. Rarely do members of the public gain a sense that military duty can be as mundane and unexciting as a typical job. Most soldiers do not experience direct combat and are essentially building strong work experience doing specific tasks in areas like information technology, health services, engineering or, like Witherspoon, in logistics.

Some major companies have developed strategies for recruiting these qualified veterans: Swords to Plowshares points to strategies adopted by energy utility PG&E and financial services provider Fidelity as standout examples. Companies that want to do more to hire veterans can adopt similar strategies, including reaching out to veterans proactively.

Human resources recruiters, too, can do more if they’re aware an applicant is a veteran. For example, a job applicant who has recently left the military is more likely to elicit a specific description of skills and qualifications if he or she asked to describe a military occupational specialty instead of merely being asked about his or her work history, Fairweather said.

Jaimie Knight, human resources director at Homebridge, a San Francisco-based home care services provider that actively seeks veteran workers, said former service members are ideal candidates because they tend to be more independent and trustworthy. But, she adds, hiring younger veterans has been a challenge.

“Some of the issues that we’ve had hiring some of our younger veterans is that often they don’t have a stable home environment,” she told Salon. “So when we go to make the offer to them, their phone is cut off because they don’t have enough money to pay the bill.”

Unlike their civilian counterparts, young veterans have sacrificed several years’ worth of (nonmilitary) work and educational experience to enlist. Many go back to school after they’re discharged, but still remain behind their peers who went on to college after high school.

One  important step, say advocates, is to view military service as a proxy for work and higher-education experience. And it's imperative that employers stop assuming all veterans are mentally damaged grunts in need of charity. Data shows that as veterans age, they’re significantly less likely to be unemployed than their civilian counterparts: In other words, once hired they’re less likely to be fired and more likely to become valuable company human resource assets. That should be a strong indicator to employers that hiring younger veterans is a benefit for a company not an act of charity.

“It’s very patriotic to say ‘thank you’ and shake your hand when [someone is] in uniform, but then when you get out and doors get closed in your face as you look for a job it doesn’t seem as genuine,” Boothe said. “It just seems like ‘Hey, let me say thank you because of your uniform not because I actually care.’ That’s how many of us feel when we get out and hit rock bottom. Patriotism should extend beyond the DD214 [discharge form], but most times it doesn’t.”