True, there were precious few things to celebrate on election night — but those few things could show a way forward 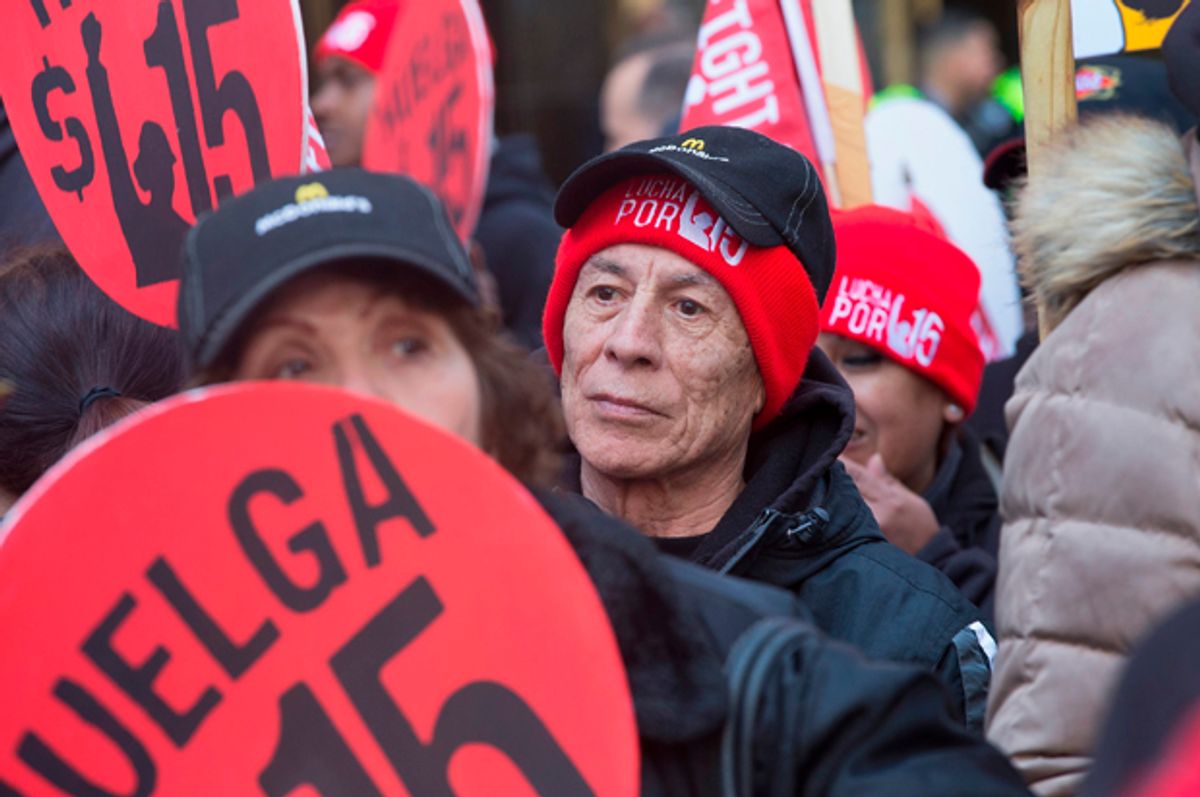 Demonstrators demanding an increase in the minimum wage to $15-dollars-per-hour prepare to march in the streets on April 14, 2016 in Chicago, Illinois (Getty/Scott Olson)
--

It is tough to find silver linings in the wake of Tuesday’s elections. Sure, Democrats picked up a few seats in both the House and Senate, but the Republicans held onto their majorities. That means, depending on how many justices the next president gets to name, that conservatives will have effective control of the Supreme Court for at least a couple of generations.

And of course, there is the Snausages-colored buffoon who will soon be redecorating the Oval Office with leftovers he picked up at Liberace’s estate sale.

In addition, the GOP still controls 69 of the 99 state legislative chambers across the country. The party also picked up two more governor’s mansions, giving it a total of 33 across the country. This helped it pick up “trifectas” — control of both chambers plus the governor’s mansion — in two states, raising the total number of states under complete Republican control from 23 to 25. The number of Democratic trifectas, meanwhile, dropped from seven to four.

So, no, it is not a pretty picture for the Democratic Party as it tries to figure out how to move forward. But progressives did pick up a few victories in elections and ballot initiatives (some of them in red states), which may indicate a hunger for more leftist policies. Some of these gains will have a meaningful and immediate impact on the lives of low-wage workers, cancer patients and the criminal justice system, for starters. And perhaps they might point the way on policy for national Democrats as they gear up for the 2018 midterms.

Four states — Colorado, Washington, Arizona and Maine — voted to hike their minimum wage. In Arizona, this means an increase to $13.50 per hour by 2020. In the other three states, the minimum wage will rise to $12 by 2020. After that time, the increases in all four states will be tied to the cost of living. These increases could affect more than 2 million low-wage workers, and quite a few of them work in wealthy areas with a high cost of living.

Of course, these increases do not get us to the $15 minimum wage that the Fight for 15 movement pushed hard enough to get adopted into the Democratic Party's platform at its July convention. Activists still have a lot of work to do on that front. But major cities across the nation, like Seattle, have adopted a $15 minimum wage in recent years, and there is legislation pending in a few others. The increases approved on Tuesday are another step in the right direction.

California voters passed Proposition 63, a series of gun control measures including banning high-capacity magazines that hold more than 10 rounds, background checks on those buying bullets, making it a crime to not report lost or stolen guns, and allowing law enforcement to seize guns from people convicted of felonies. This last reform will be especially helpful to victims of domestic violence.

The state of California already has some of the strictest gun laws in the country, so passing this law was not the heaviest of lifts. But voters in Nevada, a rural and heavily armed state, passed a universal background check requirement for private gun sales. Unfortunately, voters in Maine rejected a similar initiative.

The issue of gun violence may not have gotten much attention in this campaign beyond Trump’s promises to safeguard Second Amendment rights. But it only takes one mass shooting to change that equation, so it is good to see at least a couple of states being proactive.

The Democrats grabbed a 4-3 majority on the high court in North Carolina when Mike Morgan beat two-term incumbent Justice Bob Edmunds. This could be a huge deal for North Carolina progressives, who over the past few years have seen the already-conservative state move further and further out toward the right. The left has been pushing back hard, helped along by the usual Republican overreach like Gov. Pat McCrory’s “bathroom bill” that has mostly had the effect of driving businesses to boycott the state.

McCrory is still hanging on in a tight race for re-election against Democratic challenger Roy Cooper. If Cooper prevails, combined with the Supreme Court victory, progressives will have earned a couple of big victories in a state where they have had precious few in recent years.

California, Nevada and Massachusetts legalized recreational use of pot. Florida, North Dakota and Arkansas approved its use for medicinal purposes.

There are pluses and minuses to legalized pot, as Colorado and Washington have discovered in recent years. But legalizing it can ease some of the strain on the courts that have to handle minor possession cases — to say nothing of relieving jails and prisons of overcrowding from nonviolent offenders.

Draconian federal drug laws are still in effect and not likely to be eased with a Republican Congress (and, God help us, possibly former New York City mayor Rudy Giuliani as the next attorney general). But as always, progress at the state level can trickle upward.

Granted, these are all small gains. Progressives are still reeling from Trump’s election, and will be doing so for some time. But local activism is making a difference in some places and this week’s victories will have a meaningful effect on the immediate futures of millions of lives. That is worth something, too.