Yes, the white male anger that fueled Trump's victory was real — but it isn't valid

Make no mistake, Trumpers are angry. What they're angry about is the loss of unearned race and gender privilege 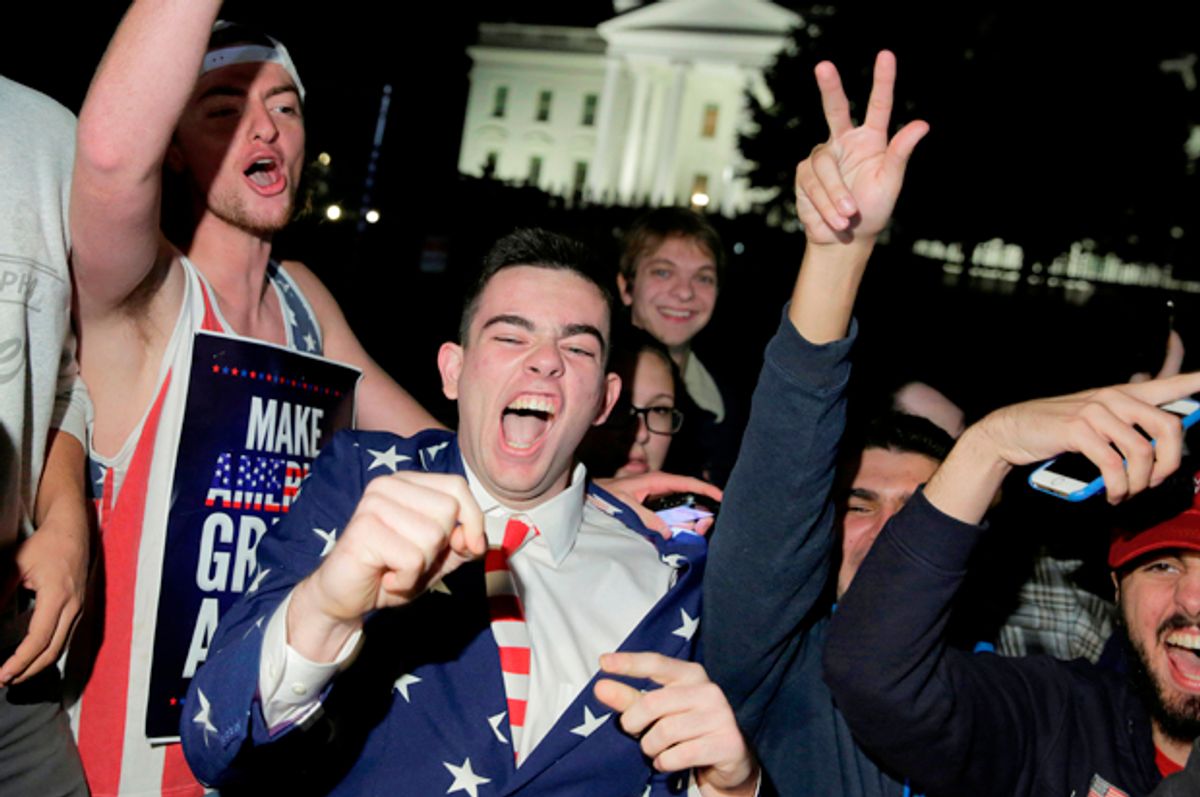 The anger that Donald Trump voters feel is very real. You don't fling a proto-fascist pussy-grabbing monstrosity into the White House unless you really want to convey that fuck-you sentiment.

Because this anger is so real and so palpable, there's been an unfortunate tendency in much of the media to assume that this anger must also be valid. The entire election cycle was a clusterfuck of articles demanding empathy for Trump voters, insisting that their rage must have some rational roots — perhaps economic insecurity?

The persistence of the "economic insecurity" angle in the face of overwhelming evidence against it was a testament to the power of hope over reason. If economic insecurity drives this rage, then something can be done about it. But if the rage is driven by less savory factors — unrepentant sexism and racism — then there is no way to mollify it without throwing women and people of color under the bus. It is also not for nothing that most "economic insecurity" theorists were themselves white men, perhaps eager for a narrative that makes people who look like them seem a little more sympathetic.

But wishing doesn't make something true, or we'd be chatting about a President-elect Hillary Clinton today.

No doubt Trump supporters are people who felt they've lost something. But what they've lost is something that wasn't rightly theirs to begin with: Unearned privilege. The Trump revolution was driven by white men who are watching women and people of color making gains that put them closer to equality. They are rebelling at the erosion of the sense that white men are better and more important than everyone else, simply because they exist.

It's tempting to be dismissive about this. A general sense of superiority over other people is hard to measure. It's not a job or a paycheck or some other material thing that we can point to and say, OK, losing that would be hard.

Of course, it's also gross and immoral for people to feel this way but  is a massive mistake to believe that since this feeling of white superiority cannot be measured, it isn't important. In a lot of ways, it matters more than material possessions or economic security. Take, for instance, the Tulsa race riot of 1921, when white Oklahomans descended on a prosperous black community, killed 300 people and basically burned 35 blocks of city property, functionally destroying the economic prospects of the Tulsa black community for generations.

Other writers (I recommend Jenée Desmond-Harris and Jamelle Bouie) have dealt with the racial aspects of the Trump win. But gender resentment also played a huge factor.

Trump won because men voted for him — and voted to reject the feminist leadership of Hillary Clinton.

"In fact, Clinton’s 12-point margin of victory among women was almost identical to Barack Obama’s 13- and 11-point wins with female voters in 2008 and 2012, respectively," Michael Tesler of the Washington Post wrote. "Meanwhile, Trump significantly expanded upon recent Republican victories among men, growing the GOP’s margin to 12 points in 2016, compared with 1 point in 2008 and 7 points in 2012."

Anti-feminism, like racism, is not a rational position. On the contrary, there's ample reason that embracing women's equality benefits men in all sorts of tangible, measurable ways. Women having access to birth control and abortion benefits men, not just because they can have more and better sex, but because unwanted childbearing puts the same kind of economic stressors on men's lives that it does to women. Women being able to work and being paid equally also benefits men by bringing more money into the home.

There's even reason to believe men are happier and their relationships are healthier because of feminism. In more feminist cultures, women are more interested in marriage. Being married to a woman who was able to graduate from college lowers a man's chance of divorce.

But while feminism benefits men in tangible, measurable ways, it comes at the cost of undermining men's right to feel superior to women. A man's sense that he is smarter, more authoritative and more important simply by being a man is eroding, and a lot of men are pissed. Voting for Donald Trump — and against Hillary Clinton — was a way to take a stand against feminism, to deny women the right to be president and to reduce them once again to a bunch of pussies that can be grabbed without consequence.

You couldn't get a better spokesman for unearned male privilege than Trump. The man is lazy, stupid and deeply incurious, but he always speaks in this lecturing tone — with the perennial fingers pinched in the air — as if he were the preeminent authority on whatever topic he's ignorantly bullshitting about. He talks down to women like Clinton, even though they are clearly smarter than he is. He is fat and ugly and his hair is creepy and you know he's never actually gone down on one of those pussies he likes to grab, but he feels entitled to have a model wife young enough to be his daughter, and who is terrified to smile all the way lest we see any hint of a crow's-foot. He seems like a lonely person who has never really loved a woman. But he treats women like servants or property, and that has its appeal to a certain kind of man.

(Women, especially white women, go along with this sexism for complex and often deeply sad reasons.)

This can be tough to accept, but so are a lot of things that are simply true: Given the choice between improving their own lives and screwing over someone else's life so they can feel superior, large numbers of Americans will choose the latter. They have found their champion in Trump, a man who has never found a bridge he wouldn't burn and for whom vengeance is a way of life.

As Trump champion Milo Yiannopoulos explained when I met him, he and his pro-Trump shock troops don't really care if Trump is a disaster for this country, so long as he sticks it the forces of "political correctness." That's a less pleasant explanation for Trump's popularity than the fantasy of white working-class voters mistaking Trump for an economic savior, but it is also the explanation that happens to be true.