An open letter to the “Ivanka voters” I grew up with: I hope you get what you want

Dear white suburban women back home who voted for Donald Trump: Let us imagine the best outcome for everyone 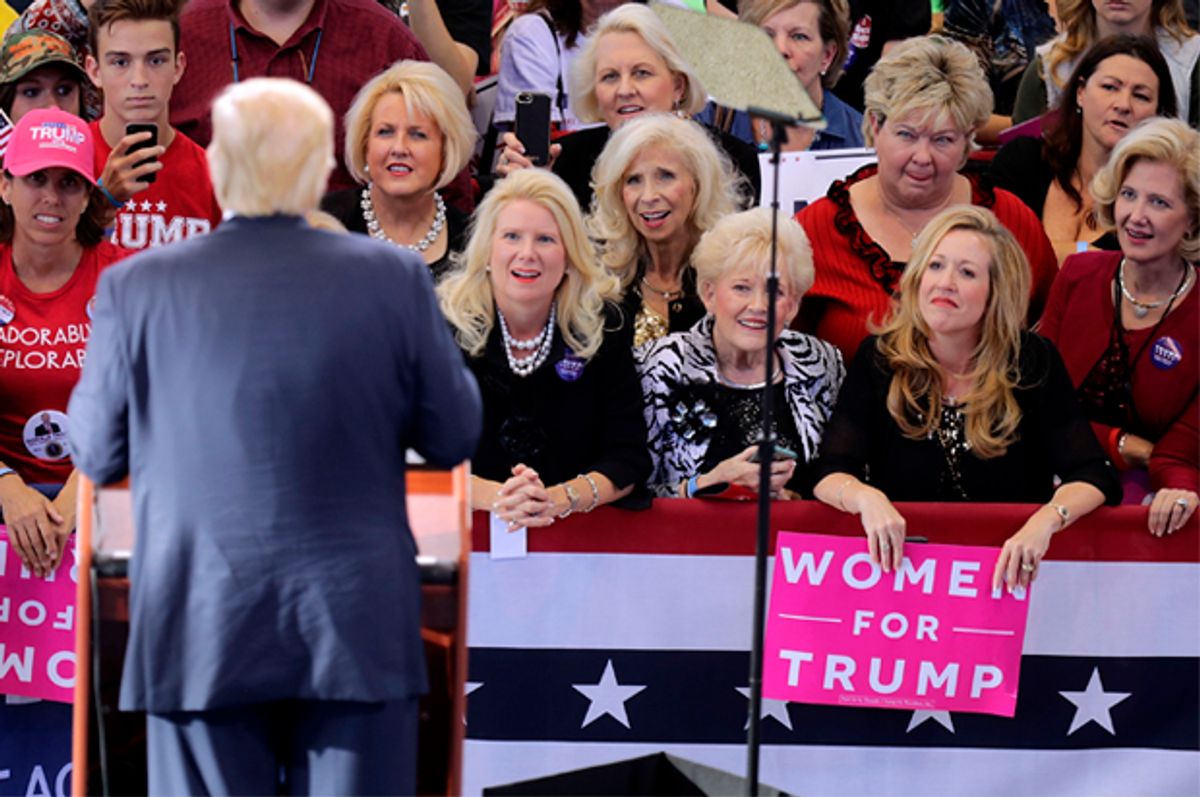 It was after 3 in the morning on Wednesday when I finally left Salon's New York office after a long night of monitoring election night returns, and I was exhausted. I boarded the elevator of my hotel with three men I didn't know and I rode up to the 30th floor, trying not to let them see that I had started to cry.

You know what that’s like, don’t you? This isn’t the first time I’ve tried and failed to keep it together in front of some guys I don’t know or trust, and I reckon you’ve been there, too. You know, I almost apologized to those guys in the elevator for being undone in public like that. It’s like an automatic response to apologize for your own humiliation, right? Ladies, you know. It’s what we were taught to do.

I stood there in that elevator, ashamed of my disappointment, of the physical manifestation of my visceral frustration with America, and with you. That night, I hoped that our country would cross a necessary milestone by electing our first female president, and that didn’t happen. I voted for Hillary Clinton on Tuesday. According to the data, you, a white conservative Christian woman from Red State suburbia, most likely voted for Donald Trump.

I wasn't ready for how easy it would be, apparently, for you all to elect an unqualified, predatory, lying, greedy, ugly-souled white male real estate tycoon over a woman who had done everything you and I were taught was “right” by our teachers and our parents, who encouraged us to not be like the guy lobbing spitballs and insults from the back of the room but to do well in school, to serve on committees, to volunteer and to excel to the best of our abilities, even in our tiny, underwhelming neighborhood high school, so that we could build a brighter future for ourselves as per the American Dream. Who could tell, back then, what the limit would be for us? Now we know, I guess.

I know we’re not close friends; not then, and not now. I left for a blue bubble town; you stayed near our childhood homes. I am deliberately childless and religiously unaffiliated; you have adorable kids, and your conservative church is one of the centers of your life. We both have good lives, and likely few real complaints. If we ran into each other, we’d catch up and that would be nice. Love your boots! Double-tap those Halloween photos. We would not be aware at that moment of how vastly different our political priorities were, and that we would not agree on any of the crucial things at stake in this election.

You don’t like to talk about politics in public, anyway; you find the tone of this election too ugly, too divisive on both sides. You’re not a “nasty woman.” Your vajayjay does not “grab back,” though of course you’ll offer “#prayers” for a sexual assault victim if an acquaintance asks for them. You’d never condone kicking a child out for being different, but you probably don’t approve of special rights for those lifestyles — can’t they just keep private things private? Your husband owns several guns, and maybe you have one, too, but you don’t advertise it with bumper stickers. You absolutely oppose abortion, but you’re not one of those screaming protesters outside a clinic — the closest one is hours away, anyway. You’ve raised funds for your church’s youth group to go on a mission trip to somewhere like Haiti, but you don’t prioritize policies about climate change, which directly affects people's lives on that economically vulnerable island. You’re primarily interested in the work of God, the impact of which you feel every day; the work of Washington, not so much.

But I thought of you when my male colleague, a San Francisco-raised New Yorker, asked me if I was surprised by the exit-poll data that said more white women voted for Donald Trump than Hillary Clinton, who conventional wisdom had sewing up the votes of those who look like her. While my peer group of women is vocally disgusted with Trump’s admission of predatory sexual behavior, aghast at the stories of women who accused him of groping them and repulsed by how he talks about and to women in his personal and professional spheres, it wasn't a stretch for me to imagine that maybe you aren’t. I don't think you would condone his behavior, of course, but maybe you don't stand to gain much by turning what could be dismissed as a lack of decorum into some kind of hill to die on.

After Trump laid waste to the Republican Party during the primary season and started his slow-motion, disastrous slide into victory, I read so many tales that my professional peers — highly educated writers, mostly white men living in New York and Washington — wrote, with an audience of each other in mind, to try to explain “the Trump voter.”

Trump is popular with white working-class men because of economic anxiety, they said. He’s not a politician, and that resonates with those underemployed, rage-filled rally people: wild-eyed white men shouting “Build that wall!” and defiant white women who look a decade older than they likely are, wearing “Hillary Sucks But Not Like Monica” shirts over cheap, unsupportive bras. We wrote about how campaign rhetoric stokes the passions of keyboard racists targeting activists and leftist writers with Auschwitz images and twisted lynching fantasies. An undercurrent of they’re poor and uneducated and ignorant and angry and racist and their communities are unraveling and they just can’t help themselves ran through most of the analysis.

But that’s not you.

Very few saw you coming to the polls ahead of time, despite the fact that during every other presidential election in our memory we’ve been obsessed with the white suburban mom vote. You are not particularly marginalized, economically or socially or politically. Your senators and your congressman, your governor, your mayor, your state legislators, they all mostly look and talk and worship like you and the men in your life do. You might be disgusted with the system — perhaps you feel a vague and unnamed dissatisfaction with how your life and values are no longer the center of the cultural narrative, and you are possibly angry about how your employer-provided health insurance has changed under the Affordable Care Act — but you definitely are of the system, and have always benefited from it. So is Donald Trump, for that matter. He may be an outsider in Washington, but everywhere else he’s just another local bigwig on steroids, working the tax code shrewdly and slapping his name on buildings, subtly reinforcing, in a way that Barack Obama and Hillary Clinton don’t, the ingrained notions that many white suburban Christian voters hold about safety, normalcy and the way the American system is supposed to work -- for them, not against them.

You’re a version of what BuzzFeed’s Anne Helen Petersen dubbed “the Ivanka voter,” after the president-elect's poised and classy daughter, who served as a highly effective campaign surrogate:

The Ivanka Voter is not the stereotypical Trump voter. She doesn’t have a Trump sign in her yard, either because it would get egged or she doesn’t want to fight with the neighbors. She knows all about Ivanka’s clothing line and brand, and thinks she would be great in the White House, because she’s classy and sophisticated, polished and well-spoken, all the things her father is not. She’s very clear that there are things that Trump says that she doesn’t agree with. She does not think of herself as racist.

Of course you’re not a racist, and you resent any accusation that you are because of who you support in the election. You don't see color; you treat everyone fairly. You feel that label like a slap in the face. It is the worst thing to be called today — you know this. Labeling Trump supporters as racist didn’t motivate you to distance yourself from the “deplorables,” only from the person pointing the hurtful finger.

After you voted you probably said something like “God has a plan,” which allows you to view everything that happens over the next four years as largely out of your control. Online, you pinned a cheeky image that mentions nothing about politics but encourages an unnamed audience to get over “it” and move on. You shared posts about the election, without mentioning the politics or the results, but did say you hope we can unite again and come together to support our country.

You weren't tearing up in an elevator because you finally understood that you learned entirely different lessons than many of the girls who sat beside you in school, many years ago, did. You are ready to stop hearing about rape culture, transgender people and bathrooms, immigrants and sexism and Muslims and Rosie O’Donnell and beauty pageants and especially feminism, because you don’t believe women are better than men.

We disagree on so much, and we come from the same place. I believe you're a nice and good person — I like to think that I am, too — and I believe you voted for the president you think will be better for us all, who will blossom in office to become the version of President Donald Trump that you see when he stands behind the podium on TV and talks about his plans to make America great again.

I hope you get what you want.

I hope you get the President Donald Trump who knows how to keep his hands to himself.

I hope you get the President Donald Trump whose legendary business acumen rebuilds the American economy into a powerful engine of prosperity and full employment.

I hope you get the President Donald Trump who will create lucrative, stable, middle-class jobs in our hometown, and all the hometowns like it, so your kids won’t have to plan to leave home after college in search of better careers and only visit at Christmas.

I hope you get the President Donald Trump who creates a tremendous new health care system that works so much better for everyone, so much better, than the ACA does.

I hope you get the President Donald Trump who is able to stabilize Syria’s civil war and the rise of ISIS without escalating military involvement on either side through his sophisticated negotiation skills, so no more families become refugees in need of asylum.

I hope you get the President Donald Trump who can intuitively tell the difference between a violent criminal and a black person or a Muslim or a Latino with 100 percent accuracy, and can confer those powers on law enforcement agents at will.

I hope you get the President Donald Trump who can negotiate a trade deal with China in which we gain everything we want and then some, and give up nothing in return.

I hope you get the President Donald Trump who possesses the wisdom, diplomacy, kindness and intelligence of the parent who could raise an accomplished, successful, polished, loving wife and mother like Ivanka.

I hope you get the President Donald Trump who prays before he tweets.

I hope you get the President Donald Trump whose relationship with Russia results in more peaceful and open democracies for both countries.

I hope you get the President Donald Trump who is embarrassed to be associated with the Ku Klux Klan and other racist hate groups, let alone to embolden their diseased rhetoric and violent acts.

I hope you get the President Donald Trump who thoughtfully eases the path to safe and legal immigration for all prospective Americans as if they were his own future wives.

I hope you get the President Donald Trump who forgives his political opponents as God has forgiven him.