We (still) can do it: Energized feminists are well positioned for future gains — if we do the work

Memo to my fellow feminists: We can mourn Hillary Clinton's defeat, but come Monday, we need to get back to work 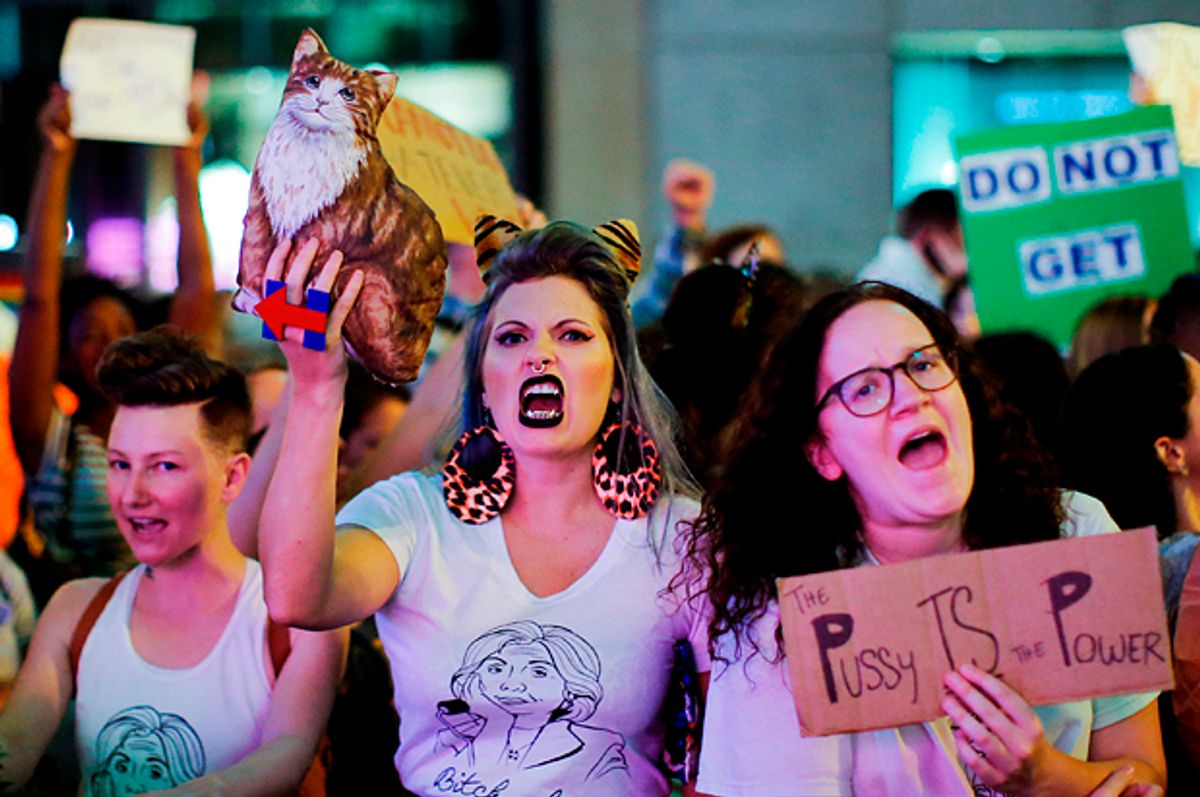 A week before the election, my 93-year-old grandmother Mary died. Born just three years after women were granted suffrage, she cast an absentee ballot for Hillary Clinton shortly before she died. Hillary’s victory was important to her as an FDR Democrat, as a girl who had lived in an orphanage for a time after her own mother’s death, as the child of immigrants, as a woman who had raised children and cared for her father until his death, as someone who worked against the war in Vietnam and to end poverty. Hillary’s election as a strong advocate for education was important to my grandmother, who trained as a literacy tutor and taught adults working in a chicken processing plant, often those who had recently been released from prison after serving time for felony convictions, to read.

So for a few days after her death, my mother and I honored my grandmother and her literal dying wish for a woman in the White House and went out on the campaign trail for Hillary, traveling to the swing state of Pennsylvania to do Get Out the Vote work.

This is how the dreams of the grandmothers live on. In South Philadelphia, where my mother spent much time in her childhood visiting her grandmother, my grandfather’s mother, who had been a single, working, immigrant mother. My mom and I talked to voters and Clinton volunteers and bought donuts for canvassers, and my mother made calls urging people to get to the polls. The spirits of our respective late grandmothers were with us, inspiring us to keep working, to be in the fight.

For us, it was full circle in many ways, illuminated by the naked contrast between reproductive freedom and oppression in the pregnant choice between Clinton and Trump. My great-grandmother, who did not have access to birth control, died from a heart attack at 40 after having 10 children in 16 years, including one who died. My mother’s mother had eight pregnancies in 10 years and raised six children. When my mother became unexpectedly pregnant with me in the fall of 1967 she was a single teen and her pregnancy was going to cause a scandal, but abortion was not legal or available to her, so she had no choice but to have me. She raised me, her only child, to be a feminist and an activist.

Unlike my mother and grandmother and great-grandmother, I have always had the luxury of being able to control my fertility. It was powerful that in the fall of 2016 — 49 years after my mother’s desperate pregnancy with me — there we were, mother and daughter in the loam of sadness after my grandmother’s death, working to elect the first woman president, a leader on women’s rights, a woman who would protect full reproductive health, including abortion, in ways that would last generations. We were working for our daughters’ daughters’ daughters.

On Monday, we buried my grandmother. I left for Philadelphia directly from the funeral for the rally with the Obamas, the Clinton Family, Jon Bon Jovi and Bruce Springsteen. There she was, Hillary, beaming, just a few feet away from me, on the night of the day when my mother and I buried her mother. Tens of thousands of women and girls — and some men, too — were there to cheer on Hillary, believing she would be elected our first woman president the next day. When that did not happen the stars fell hard on the tin roof of our aspirations, our belief dashed that finally — finally — the dreams of our grandmothers would come true.

Now, I hope that my 68-year-old mom gets to see a woman president before she dies. Feminist women should not have to carry the same simple dreams across several generations, begging for them to be realized, only to have them squashed. Our dreams matter, too.

For feminists — that is, people who believe in full equality and justice among the genders and do something about it — this moment of snatched victory seems a night devoid of stars, to paraphrase Martin Luther King, Jr.’s “Strength to Love.” Hillary Clinton has won the popular vote but lost the Electoral College and so the Trump kakistocracy is born.

Trump’s election is a world tragedy, and on a personal level for tens of millions of Americans it is frightening, sad and humiliating to watch a man who has openly degraded us take over an office many of us revere. I’d love to tell you this isn’t my America that has elected him, but this is exactly my America: the America that tells me as a woman every day that I am not as good, that I don’t matter, and it makes perfect sense to me that in that America -- which is littered with sexist, racist, nationalistic hate and fear, that a man with no respect for women — a man who brags about sexually assaulting women has just been elected president.

As a social group, women do not cohesively bind together toward causes as a group the way African-Americans do, but feminists have shown that they will come together and unify for causes and as a voting bloc, and that is a power we must harness. Our dreams do matter, but no one is going to grant them for us. Intersectional feminists are part of the strong coalition that delivered the popular vote to Clinton, and in doing so showed a mighty power. Now, we need to grow our ranks and solidify that power to affect future elections, improve the lives of women and girls, and to bring about an end to the various forms of oppression and violence far too many face.

The media and the culture have gone wild with the “women didn’t vote for Hillary” bit this week. Oh, how we love the notion of women turning on other women. Stop. As I’ve written about here, feminism is not only women’s work, and the job of electing Clinton — and stopping Trump — was not women’s work. Everyone needed to be on board, as everyone is accountable for ending the patriarchy, so let’s start talking about the 59 percent of men who didn’t vote for her, too, instead of simply focusing on the 46 percent of women who did not. Let’s talk about that 13 percent difference. Even among Democratic voting men, only about 40 percent identify as feminists. We need more on board as active, committed feminists.

We need to do a better job of expanding our ranks across gender divides, but 42 percent of voting women didn’t vote for her, so we clearly need more women to be feminists, too.

As we expand our ranks we will expand our power to enact change, to elect feminist politicians and to affect policy. That’s a big part of how we can use it to serve the needs of justice for all — women, people of color, the economically disadvantaged, the LGBTQQI community, the disabled, immigrants and people of all faiths. We also need to engage in culture change at a broader level with folks who aren't on board, yet, with our values. As a first step to changing hearts and minds, we need to make sexism as socially unacceptable as we have with racism.

Further, we must reject this notion that we should come together for “unity.” We must not support the bigotry of our incoming president; we must be the resistance. We must work to overcome the hate we are going to see these next four years. Remember, we won the popular vote -- it’s a squid-ink dark night for sure, but there are still some stars up there to guide us, however faint. Let’s use them to navigate out of this. We like to say love trumps hate — but really, hard work trumps hate.

Feminism is a revolution, not a reform, and it takes work to achieve revolution. So, memo to my fellow feminists: We can continue to be depressed and mourn, but come Monday, we need to get back to work. We must work hard if we are going to survive this presidency with any rights for women intact, see successes at the midterm elections and then take back the White House in 2020. There is much to be done. We have elected a bigot and it is incredibly difficult to stand up and be an out-loud feminist in a culture filled with so much hate that the president himself is a misogynist, but it is exactly what we must do to win the war after losing this battle. And we are winning the war, albeit slowly. By 2050 this country will be minority white, and the more diverse our electorate becomes, the more progressive. As we roll to that, the last grabs — pussy and otherwise — of the dying white power structure will be mighty, so we need to not go stagnant like feminism did in the ’80s during the Reagan administration and after the defeat of the Equal Rights Amendment. This is the time for us to rise, and we need to do just that to beat back the Trump administration, his Supreme Court nominations and the Republican House and Senate. We must not just resist, but revolt.

Feminism has come to mean a feeling, not behaviors focused on creating change. We need to, at a minimum, make sure that we not only identify as intersectional feminists, but also call out sexism, racism and all other forms of bigotry. And we must engage in our political process. 47 percent of the registered electorate didn’t vote. We must work to get them to the polls next time. We must encourage feminist women to run for office and support them. We must also actively engaging in increased voter registration, which is what Bernie Sanders said was key to his reforms and across-the-board progressive reform. And we must support feminist organizations and causes with time and money if we can, as we can.

Let us win or lose our battles together as feminists. Let us remain as fired up and ready to go as we were Monday night, when we responded en masse to President Obama’s call to support Hillary Clinton. This campaign has come to a bitter end, but our dreams are alive, and in our hearts beat generations of hope.