Your state just legalized marijuana? You're going to need some playlists

Song, movie and TV suggestions for your very first experience with weed! Since, you know, it was illegal until now 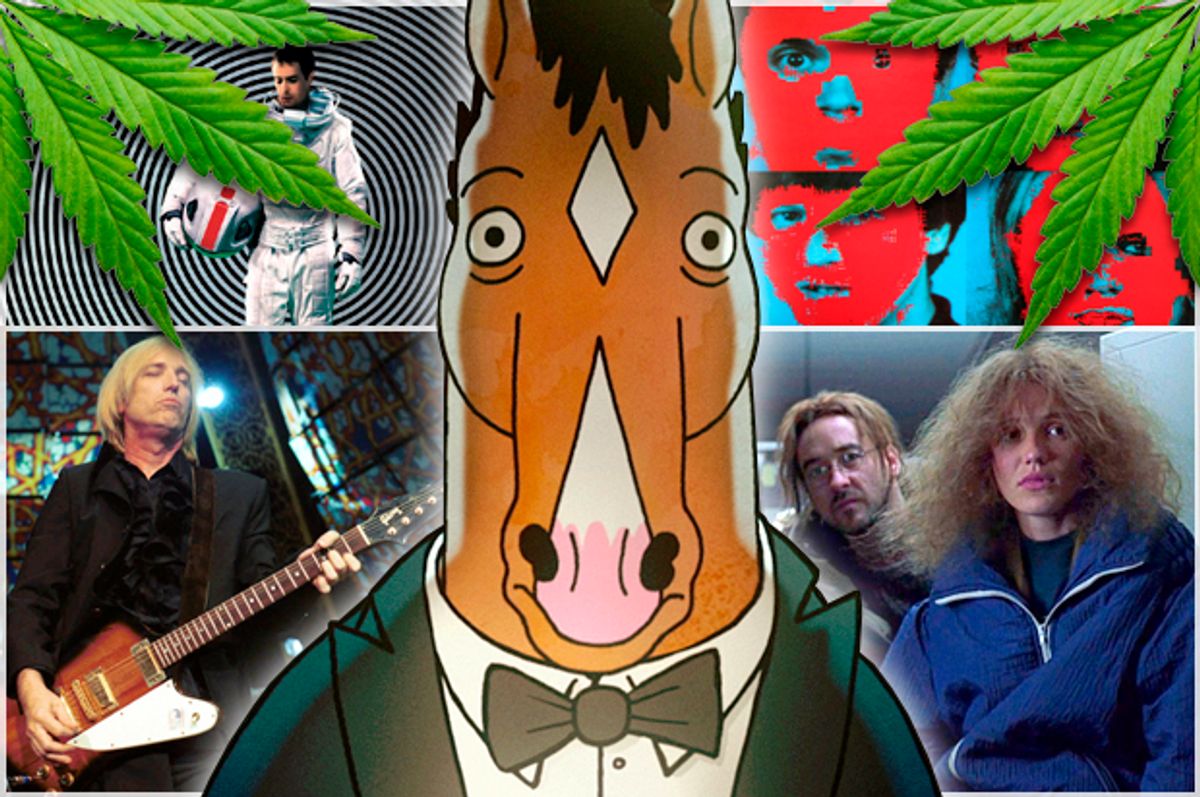 They call it "entertainment insurance" for a reason. Oh, but you probably didn't know they call it that, did you! Marijuana has been off-limits to you until just this week, when your state finally legalized it!

Well, fear not. We're here to take you through the transition from "music is great in the background during a dinner party" to "where did I put my good headphones and why is this overhead light so bright?"

Sure, it might take a little more focus than you're used to giving music, TV shows and movies, but here are some selections that will make you wonder how you never noticed those incredible details before now...

"Magic Man" by Heart
This song is the best song. No matter what condition your brain is in. But now when you listen to it -- especially once the congas come in at 4:09 -- you'll want to kiss your state legislators square on the lips.

"Don't Leave Me this Way" by Thelma Houston
"Disco? On weed? That doesn't sound right to me at all!" I hear you. Just give it a shot. Let that very talented bass player be your guide. And by the end of the song, when we're all blasting off to Jupiter together, you'll understand.

"Them Changes" by Thundercat
A word of warning: You'll want every single song to sound like this.

"Elephant" by Tame Impala
You'll probably want to do a deep dive on these guys. Sometimes they sound like this, which is outstanding. Other songs of theirs will remind you that raves happen for a reason, or that psychedelic music was popular for a while there.

"Crosseyed and Painless" by Talking Heads
"Weren't Talking Heads known as a bunch of fussy RISD smarty-pantses? What gives?" Well, yes... I guess. But then they met Brian Eno and they sounded like this for a little while, which will be good for you in your current state.

"McLemore Avenue" by Booker T. & the M.G.'s
This album, an outrageously groovy cover of the Beatles' "Abbey Road," is all worth listening to after your very first trip to the Hemp Emporium. And the fact that they rearranged the order of the songs makes it even more fun.

"You Don't Know How It Feels" by Tom Petty
There aren't a lot of songs about smoking marijuana on this list because, as you'll soon learn in your new life as a responsible song-listening marijuana user, singing about doing drugs is far less important than writing, performing and recording great music. This song just happens to do both.

"Earth Shaker" by Spirit
This is the band that sued Led Zeppelin this past year over "Stairway to Heaven." But quite frankly, concepts like lawsuits and copyright infringement are going to seem overwhelming and/or dull to you right now. Just listen to this nice and loud.

"Hey Baby" by J.J. Cale
You might notice that somehow this song correlates perfectly to the way your body and mind feel right now. This might strike you as a happy coincidence but it is not one.

"Alien"
You probably already know to reacquaint yourself with "2001: A Space Odyssey" and "Blade Runner." This movie -- if you're generally OK with being scared shitless -- is maybe even more powerful catnip to your new and expanded brain.

"The Hudsucker Proxy"
You really have to go with this one, so be sure to do that. It's worth it. It is absolutely non-stop, and the universe is... heightened, shall we say? (Heightened universes last week were just a backdrop to the story, but from now on they are everything). Also: Paul Newman.

"Nashville"
Robert Altman was famously a huge stoner, so you're in good hands. I hated this movie the first time I saw it. If you're not feeling it past the first 10 minutes or so, you should probably move along. Just realize that you'll miss an amazing song written by Gary Busey. And no, I'm not talking about some hallucinatory mindballad -- Gary Busey really did write a great song that turns up in a key scene in this movie.

"The Conversation"
Movies that "trust the audience" to catch up to what's going on might prove to be a bit of a minefield for you, to be perfectly honest. You're a lot of things right now, but trustworthy when it comes to figuring out complex plotlines and character relationships? Not so much. This movie is worth it, though, so try your best and don't hesitate to rewind.

"Moon"
Is it surprising that David Bowie's son created something that nestles perfectly into a drug-shepherded brain? No it is not.

"The Graduate"
If all you want to do is rewind Benjamin Braddock's mother reacting to his (delusive) news that he's getting married, you're free to do so! Watch it as many times as you want! It just gets better and better. And that old chestnut, "plastics" really holds up well.

"Rosemary's Baby"
If you have never liked disturbing movies before, you're not about to like them now. But if that's your thing, this movie should make your brain light up like a pinball machine. And it might be the small scenes that do it, like when Mia Farrow arranges Scrabble tiles on her floor. Why? Not sure.

"Being John Malkovich"
This movie borders on being too complicated for cannabis-assisted viewing, but even if you only make it as far as the puppeteer controlling a gigantic Emily Dickinson marionette from a bridge...

"Network"
Why wouldn't the stone-cold classics be worth throwing on right about now? And honestly, it may be the little details rather than the big moments that manage to slingshot your cerebral cortex across the room.

"The Twilight Zone"
You probably could have come up with this one yourself, but in case you didn't, here you go. A general note: Anything that is very smart and succinct and unpredictable without being (and this is very important) hard to keep track of will definitely do.

"Archer"
This one might take a little getting used to, as the protagonist of the show is, for the most part, an unspeakably atrocious monster. Stick with it. As with many of the other shows on this list, you almost get the impression that the writers were themselves partaking of the good stuff. Before it was legal...? Maybe? Anyway, just a theory.

"Fargo"
Season two, in particular, will remind you that amazing dialog hits your brain differently post-Proposition 64. Oh, and UFOs.

"How It's Made"
You probably weren't expecting Science Channel documentary shows like this to be as mesmerizing and jaw-dropping as they are now that you've eaten that innocent-looking lollipop. It's even better if you turn the sound off and see which Pink Floyd album it magically lines up with!

"High Maintenance"
Perhaps a bit on-the-nose for this list (see Tom Petty, above), but let's think this through: They made a show about a pot dealer making deliveries to his clients. Who did they think might be drawn to watch this show? What state of mind might that audience be in? It's probably worth checking in with.

"Black Mirror"
A bit hit or miss, but the strong episodes will make you realize that this substance you're now allowed to partake of doesn't make you stupid at all! Where did that come from?!

"Aqua Teen Hunger Force"
Just be sure to first get the lay of the land a bit, before diving into the deep end with this demented strain of brainfood. Weird can be good in this brave new world, and this show is very very very weird.

"Bojack Horseman"
Even if you watch nothing but the opening credits, you'll thank me.

VH1's "Classic Albums"
Just pick a band and go with it. You're sure to get at least three of the following: great songs; rancorous in-fighting; copious drug ingestion; quotes to rival anything in "This Is Spinal Tap." And if your dice come up Deep Purple, you'll even get Ritchie Blackmore interviewed in his castle with a suit of armor behind him!