Dungeons & Dragons isn't a spectator sport: What we lose when the game comes out of the basement and onto the screen

The fantasy game rebooted its rep from nerd hideout to hipster pastime, but passive consumption misses the point 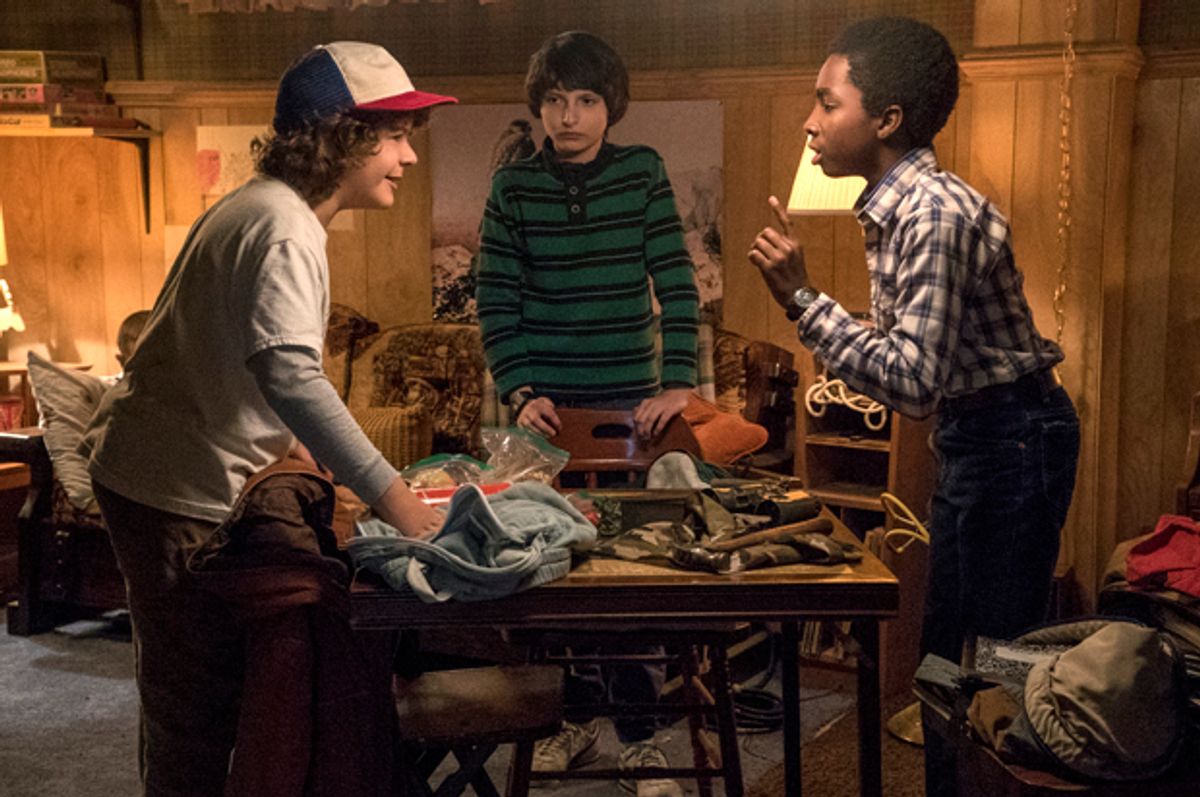 "We're like buddies from Brooklyn,” says Harmon, whose character name is Fondue Zoobag, a half-orc ranger.

And so on. Yes, the experience of playing D&D invites silly, nonstop banter. Thankfully, shows like “Harmonquest,” which debuted this summer, aren’t making fun of D&D and its players. They’re celebrating them. But to my mind, something's amiss here. Something important is lost when the venerable fantasy role-playing game, founded on participation, becomes a spectator sport.

"Since the dawn of the 1970s, fantasy role-playing games have provided men and women with an escape from their awkward lives," intones the Dungeon Master named Spencer Crittenden, at the start of each webisode of “Harmonquest.”

Not anymore. Good news: The role-playing game once cast into the shadows of nerddom is now out of the basement and onto the big screen. And, dare I say, it’s almost cool.

D&D has managed to reboot its image as a hipster, A-list pastime. Sales of the new iteration of D&D, released in 2014 to coincide with the game's 40th anniversary, have been selling like pints of ale in a hobbit tavern. The sword-and-sorcery game seems to have tapped into the rejuvenated live storytelling culture of shows like "The Moth," attracting throngs of new, mainstream players, as fans ranging from Stephen Colbert to Vin Diesel and Jon Favreau extoll the game’s impact on their creative lives.

The recent Netflix hit "Stranger Things," a nostalgic paean to all things 1980s and dorky, has also helped push D&D into the public eye. The inaugural season of the series took the summer by storm, introducing fans to fantasy tropes like hit points, 20-sided dice and the demogorgon. “Stranger Things” easily made its saving throw to return for a Season 2.

“Harmonquest” was also picked up for a second season. And yes, it can be funny. We watch Harmon (the writer/producer behind "Community" and "Rick and Morty") host his own D&D show that features joke-cracking celebrity guests such as John Hodgman, Aubrey Plaza (“Parks and Recreation”), Kumail Nanjiani (“Silicon Valley”) and Chelsea Peretti (“Brooklyn Nine-Nine”) playing the game before a live studio audience. The D&D action is later turned into an animated cartoon that looks like a cross between “The Simpsons” and Frank Frazetta.

Harmon’s show is but one example. There’s also Wil Wheaton’s "Titansgrave" and "Critical Role,” both on the Geek & Sundry channel. Other webseries offer provocative titles like "D20 Babes" and "Heroes & Halfwits." Dozens of audio-only podcasts of game sessions have also multiplied like so many rampant goblins and orcs, ranging from "Drunks and Dragons" and "Crit Juice" to "Beer and Battle" and "Pretend Wizards." Theatrical productions like "She Kills Monsters" and improv groups like Dorks in Dungeons also incorporate the gameplay of D&D into their performances. Even D&D itself (owned by toy giant Hasbro) got into the game this September when, for over three hours and 30 minutes, viewers watched “Dungeons & Dragons Live," a broadcast of a live, nerd-studded D&D game that streamed from the gaming convention PAX West in Seattle to over 200 movie theaters nationwide.

All these performance-centered shows are a new twist on bringing D&D to the big or small screen. To be clear, they’re not D&D Saturday morning kiddie cartoons like we had in the 1980s, nor lame “Lord of the Rings”-like fantasy epics. (Remember 2000’s “Dungeons & Dragons” starring Jeremy Irons and Marlon Wayans? We’re trying to forget it, too. Despite the skepticism, in 2018 Warner Bros. is rebooting the D&D-as-movie idea, with Rob “Goosebumps” Letterman directing.)

These podcasts and web series don’t use the D&D brand the way “Fantastic Beasts and Where to Find Them” uses a familiar part of J. K. Rowling’s Harry Potter world to tell a new story. Rather, these programs are all about trying to capture the improvisational nature of playing the game. The die-rolling. The witty repartee as you slug Mountain Dew. The experience of watching these is much like Twitch, a channel members tune into to watch live video games.

But presenting D&D as passive entertainment — something to be watched — risks turning what has always been a participatory game experience into the next binge-worthy program.

These shows make it seem that only famous actors and veteran players can have all the fun; that the game is a medium for being funny. We watch and we laugh, but is it really D&D?

To my mind, D&D and other fantasy role-playing games have always been about the imagination. D&D may be a medium for goofing off, but it’s not just fodder for Hollywood comedians whose game is to out-quip each other.

Maybe I'm a grumpy old D&D player. I grew up playing in the 1970s and ’80s, the era that "Stranger Things" is set in. I feel passionate for how D&D works, and how it activates the gray matter between the ears and inside the mind’s eye. I can appreciate what is lost when you turn the game into something you watch, instead of a tool for entertaining yourself and learning things about yourself. Something unique happens when you play. The sparseness of D&D’s crude tools — maps, sketches, dice, books, silly little figurines — make you fill in the gaps. You bring your imagination to the table to complete the picture. D&D and similar games take some of the storytelling power we’ve ceded to Netflix and Hollywood, and they return it to us.

D&D isn’t only an outlet for creative expression and storytelling. As I argued in a recent TEDx talk, the game schools you in character-building, risk-taking and problem-solving — after all, life is also a dangerous dungeon. Be prepared. Your team of elves, dwarves, humans, wizards, you all work together. And collaboration means recognizing the power of teamwork and diversity. You can’t go it alone, and neither can your culture, even in a fantasy world. The experience of playing, not watching, improves empathy, tolerance and collaboration. In Donald Trump’s America, we need this.

Yes, these spectator versions of D&D aren't going to kill the game. The primitive game of pencils and maps and plastic figurines will still exist. And extra exposure of the D&D brand, in these celebrity-endorsed ways, will certainly bring more potential players to the gaming table. “Harmonquest," in its crude way, celebrates the imagination.

But the experience of watching these shows doesn't engage the imagination the same way as playing D&D does. Making a role-playing-game adhere to the spectator sport cliché of American sports or leisure culture — that is, you sit down with guacamole dip and beer and watch football or baseball or the Olympics or Netflix — automatically makes that active experience passive. These hip, funny, clever D&D shows distract us from some of the game’s original mojo.

Humans crave face-to-face interaction. The creep of the screen in our lives makes that all the more hard to do. For decades, games like D&D (or really, any board game) help incubate spaces for casual give and take, improvisational joking and mock-competitive interaction. D&D in particular also helps cultivate and nurture a you-can-be-the-storyteller experience.

We shouldn't forget this as each and every activity, it seems, becomes a televised event to entertain. Go ahead and watch “Harmonquest” or “Titansgrave.” Listen to "Drunks and Dragons” on your morning commute. But then shut off the iPad, roll the dice and kill some monsters.

See what happens when you take back the power of storytelling, if you dare.