HBO's "Divorce": "It would have been easier to make as a drama" 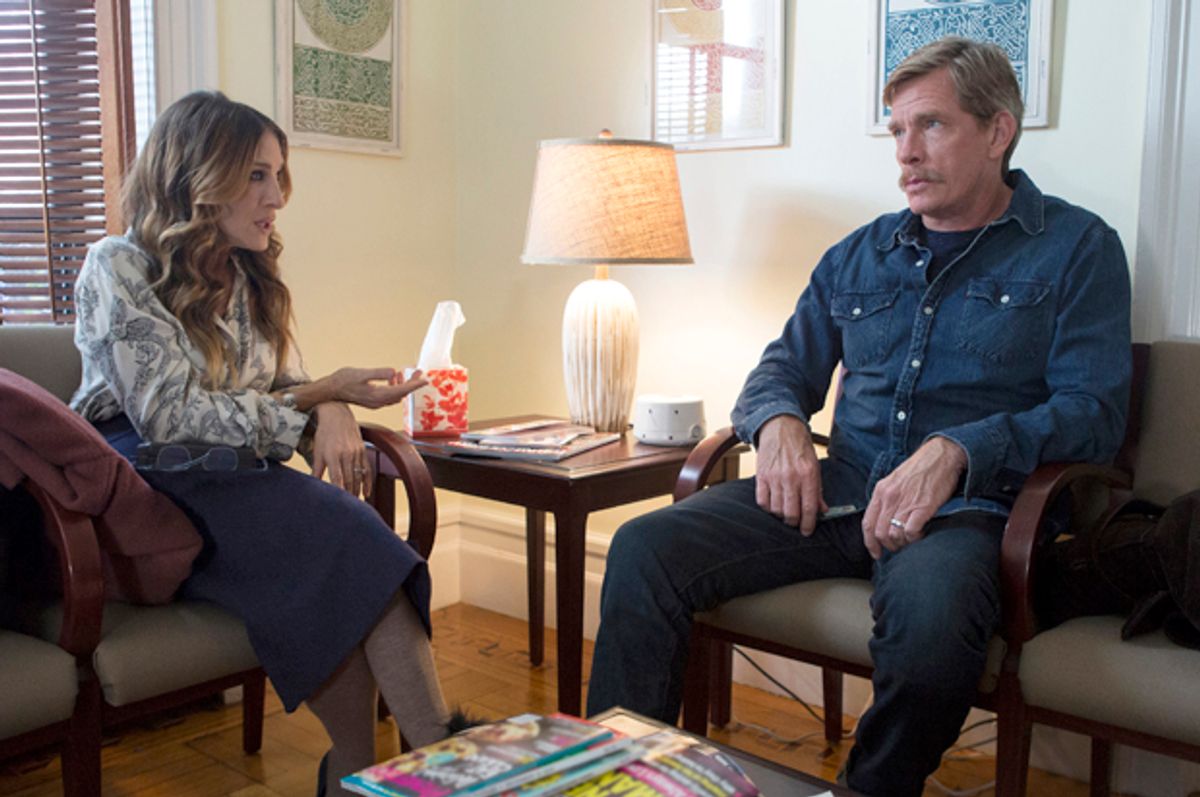 “Oh my god. That show.” My husband greeted me with those words after taking in an episode of HBO’s “Divorce” purely of his own volition. I pressed him to further explain his reaction, and he shook his head. “It’s unbearable. I feel like I spent the last half hour desperately trying to claw my way out of a locked trunk."

That’s a fairly standard reaction, actually. “Divorce’s” own creator and executive producer Sharon Horgan got similar feedback from her husband, who usually doesn’t mind watching her shows; in addition to this series, she also created Amazon’s “Catastrophe” with comedian Rob Delaney.

“Divorce” is starkly different from Horgan’s other work, in that one is a snarky, brash examination of the endurance it takes to stick it out in a marriage, while the other vivisects a couple’s tortured efforts to dissolve theirs.

In “Divorce,” Horgan handles the dying union of Frances (Sarah Jessica Parker) and her estranged husband Robert (Thomas Haden Church) with such detail and complexity that the couple's vitriolic exchanges and distressing missteps look and feel genuine. Parker and Church’s barbed comments and acidic conflicts come across as so realistic, actually, that they proved too much for Horgan’s spouse to bear.

“When he saw the pilot, the color drained from his face,” she recalled in a recent interview. “He just wasn't expecting it. It's ridiculous because the show is called ‘Divorce,’ and you don't have to be a brain surgeon to figure out what it's about. Considering what I've made in the past, I didn't think it would throw him so much.”

He’s not alone. And these reactions illustrate why “Divorce” is one of those unique TV series that’s well made, but fueled by dialogue and situations that strike a little too close to reality to qualify as a simple and fun distraction. Viscerally accurate in its depictions of human flaws and pettiness, “Divorce” often makes most, if not all of its characters behave in utterly deplorable ways, which can at times render it almost unwatchable.

For every viewer who gives it high technical marks and low artistic points, there are those who appreciate its fearlessly harsh, tart take on what the end of a relationship can look like. With its holiday-themed sixth episode set to air this Sunday, “Divorce” is averaging around 620,000 viewers per episode, making it slightly more popular than the millennial hit “Girls” but attracting decidedly few viewers than the male-driven “Silicon Valley.”

Read on to find out what informed Horgan's decision to dredge comedy out of a harrowing subject, and what it has in common with her lighter Amazon series.

What made you decide to write a comedy about divorce, of all things?

Sharon Horgan: …I don't know how the divorce thing came into my head. I really do think I'd just seen “War of the Roses” again… It's not the most original idea of all time, but I enjoyed the idea of documenting, quite forensically, the breakdown of a relationship through the eyes of divorce, through the parasitic nature of the industry that revolves around it. No one really knows what goes on in a divorce unless you've been through one.

I have friends who are divorced -- not many, because I'm Irish, and in the UK, people don't do it so much, they just stick around. …[I was] just going online and reading some horror stories of how these things get so out of hand, and the terrible, terrible advice that's given to people because the people on both sides are earning a living from these people's pain. The things that can start off as small things and end up spiraling into huge things, and the money that's spent. It's fucking horrible.

Then I read this great book called “A Disorder Peculiar to the Country,” which was about the breakdown of a relationship. It was funny because it was in novel form, but if you were to put that on TV, people would be like, "Get this out of my eyes, it's too painful." I had to find somewhere in the middle, strike a balance.

I want to go back to something you said, that in the UK there's not a whole lot of divorce. Is there a remarkable difference between the American experience of divorce versus the British or even the European process? And how did that inform your writing for the show?

To tell you the truth, the industry of divorce in the U.S. is the one I know more about now, because we were lucky enough to be able to get two divorce lawyers in to talk to us at the very beginning of the writers' room. I was brought up in Ireland, and divorce wasn't even legal there for a very long time, right up until the fairly recent present. You're much more likely to find two people living together incredibly unhappily all their lives; it's just what you did. It was a shameful, shameful thing to do.

I think in the UK now, it's much more regular, just not as much as here. I don't know why that is, actually.

Between this and your other work on Amazon’s “Catastrophe,” you’re presenting two different ways of looking at intimacy. On the “Catastrophe” side, here are two people who had a casual relationship, and are forced together on purpose, and have to find intimacy with each other. “Divorce” is the other side of that, where the intimacy has atrophied. Is that a subject that drives you, that exploration of intimacy in its many facets? Am I reading that incorrectly?

No, you're not, but it also happened by accident. Because I made a show before “Catastrophe” called “Pulling,” which was about a woman who, at the last minute, changes her mind and decides to not marry her long-term partner. It seems like I've done something really clever and have this weird trilogy about the different stages of relationships, but, truly, that's by accident.

When Rob [Delaney, Horgan’s “Catastrophe” co-star] and I started writing “Catastrophe,” we weren't that interested in writing about the genesis of a relationship. We wanted to write about a long-term marriage and how difficult it is to stay in love with all the shit that's going on around you, but for two people for whom there is no other option. We thought it would be interesting if you write about people who you know they're not going to part. They're just going to find a way through it.

…With “Divorce,” I was very, very interested in writing about relationships breaking down and the loss of romance. Writing about a couple for whom the ghost of their past is tragically a much happier time. There's been no plan.

So you don’t wake up every day to an inspiration a sign that reads "Intimacy!" on your wall?

[Laughs] I know. It is obviously easier to write about what you know, but, as it turns out, it's quite interesting to stretch yourself a bit and do a bit of homework, do a bit of research.

It’s also jarring to see Sarah Jessica Parker, a woman closely associated with ideas of friendship and romance because of “Sex and the City,” playing an unlikable woman surrounded by awful friends that nobody would aspire to emulate. Was that intentional?

We didn't really think about it. We wanted to have two very interesting, complex women in her life. One of them we wanted to be bitter -- she's lost one husband, another one has divorced her; we wanted to have a friend who knew about that stuff. We wanted her to be that a friend who has got a better idea of how everything should be played, because she feels like she's made all the mistakes, and she doesn't want her friend doing the same thing. She's a complex character. I hope people like her, because the actress who players, Talia Balsam, is so likable.

With Molly Shannon's character, with Diane, she's such a funny, brilliant actress, we wanted to see someone who's made this terrible mistake and somehow, out of the flames of that, comes the resurrection of her relationship that should have been dead. That's the relationship that looks like the toxic mess We just love the idea of there being these two friends who are giving her terrible advice. Not even terrible advice, just advice from their own perspective, not necessarily the right advice.

Right, and very self-centered. And that leads to my next question: The last time I saw a show about divorce, and actually I believe it was an HBO movie (“Dinner with Friends”), it was a drama. Given the subject, that makes sense. Was it challenging to address “Divorce” through a half-hour comedy framework?

I'm so glad you said that -- yes. In a lot of ways, that was the hardest thing about it, because you could go to so many dark and awful places if it's a drama. In a way it kind of hemmed us in… It would have been a much easier show to make and write if it were a drama.

Comedy is really hard, because forget about just telling story, and just fleshing your characters out and giving them a journey and a narrative. You're having to find the funny in it, the absurd, all the way along. For that reason, it made us make a lot of choices which were, there can't be one “baddie.” You need to swap allegiances all the time, you need to be on his side and then on her side. You had to see them have victories and then see them at their worst possible place.

Comedy, especially tragicomedy, can really help with all that. It would have been too relentlessly depressing as a drama. Approaching it through comedy, you get a few light moments, and you get to laugh at their terrible decisions, and the absurdity of it. It would have been easier to make as a drama, but I'm so glad it's not. I'm really glad.