My grandma, torn between Trump and Bernie, has something to tell us

Not quite a Bernie Bro: My Texas Christian grandma was drawn to Trump, loved Bernie — and couldn't stand Hillary 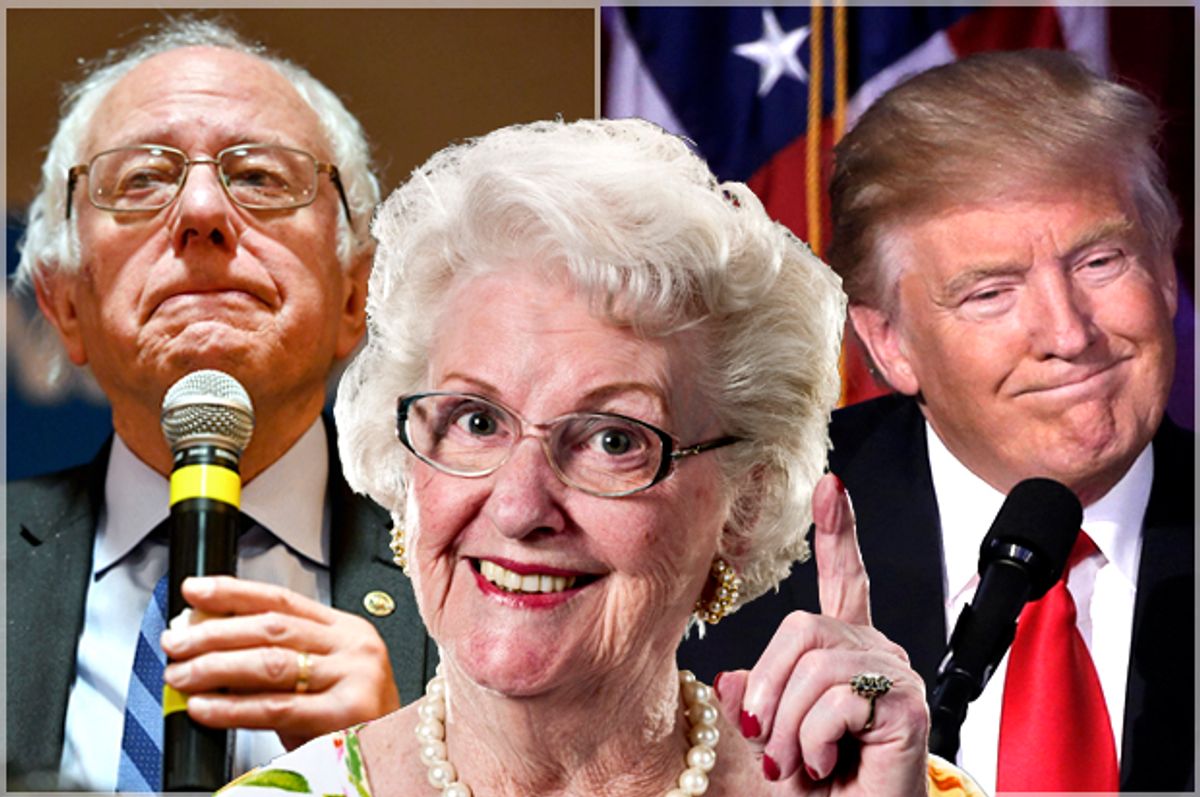 My grandmother, a Texas-born woman in her 80s, usually votes Republican. She’s Christian as all hell. She’s also funny and generous and smart – I love her.

In December 2015, over grilled cheese in her kitchen, she told me Donald Trump would make America great again. When I pressed her on exactly how she thought he would do that, she simply repeated the slogan. She was impressed that Trump powered his primary effort with his own money; it made him seem authentic. On a visceral level, she hated Hillary Clinton. When I asked her about Bernie Sanders, she said, “Who?”

Months later, I was at a Bernie rally in Pittsburgh. Simon & Garfunkel’s “America” played while jaunty college kids in Converse shoes packed in as though awaiting a rock-concert headliner. Bernie, the brutally honest outsider, took the stage and preached a platform based on uniting Americans across demographic divides – a unity of all people for economic equality, sweeping social justice reforms and an end to corporate greed and big money in politics.

Half of my liberal peers felt the Bern. The other half were kind of like my Grandma – they said, “Who?” They said, sure, everything Bernie says sounds great, even utopian. But Hillary was “inevitable.” Hillary had experience – an attribute you need to succeed. Let’s get behind the realistic candidate, the one destined to win.

Meanwhile, journalists misused their intelligence. They penned article after article slamming Trump instead of educating our families about Sanders' agenda, or persuading our skeptical friends that he had a real shot at the White House. The result was Trump’s domination of Facebook, Twitter and the electoral conversation – Trump’s brand growing bigger and stronger everyday.

By the time Bernie dropped out in July, a lot had happened: Trump had implicitly accepted an endorsement from the KKK; Madeleine Albright had bullied us, saying there was a “special place in hell” for women who don’t support Hillary; and finally, Bernie “Birdie” Sanders – a man of principles, and truly a man of the people – had become a household name. But it was too little, too late.

By the time the Democratic National Committee’s efforts to sabotage Sanders were revealed, Clinton was already solidified in the public eye as the Democratic nominee. My liberal friends rationalized their continued support of Clinton amid scandal with an “ends justify the means” approach. In their eyes, Clinton was the only way to defeat Trump, even though many journalists made the argument that all along, Bernie had the better odds.

I talked to my grandma this October, after Trump’s “Grab them by the pussy” comments surfaced. She said, “I don’t like him, but Hillary is also horrible. What should I do?” I asked her, if Bernie was still in the race, would she have voted for him? She said, “Yes. Yes, I would’ve voted for Bernie. Bernie is a good man.”

What is more difficult to imagine – A Christian Republican from Texas voting for a Jewish socialist from Vermont? Or a reality-TV host with zero public service experience and a heart full of hate becoming our next president?

Sometimes it’s all right to dream big. This time around, our failure to dream big with Bernie Sanders and stand for something pure and principled has directly led to the nightmare that is Trump. So let’s get back to dreaming big as soon as possible. Let’s channel this agitation into breaking down the corrupt two-party system and running a true outsider – a third-party candidate of substance and principles – for 2020. After all, what is more freakish – the possibility of a third-party candidate participating in the 2020 debates, or the fact that we will soon have to call Donald Trump “Mr. President”?