You make me want to nuke: The nuclear option may be the best environmental option too 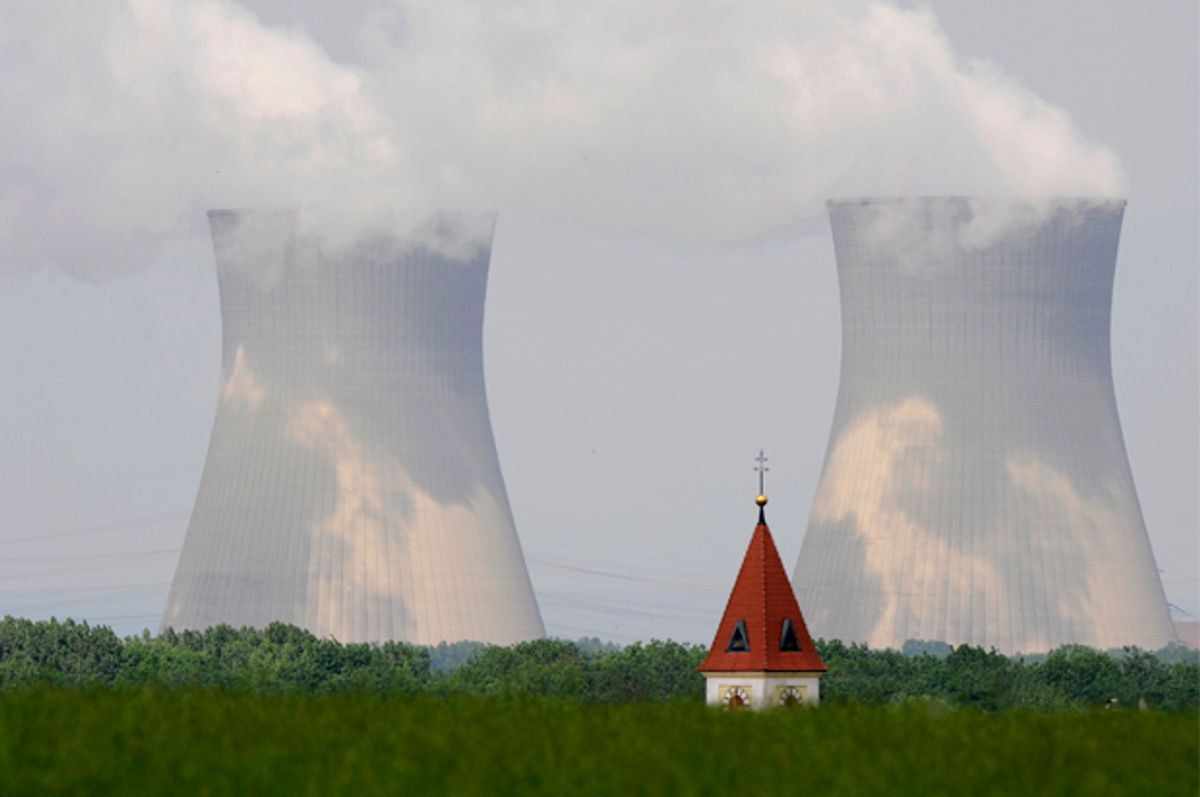 It’s a giant tea kettle — but unlike a cup of Cozy Chamomile, its contents can melt your flesh or deform your body. The pressure is the same as you’d find half a mile below the surface of the ocean. The temperature is 572 degrees Fahrenheit. Unstable atoms — the microscopic equivalent of decrepit buildings — are fracturing into pieces that spiral away from one another in frenetic fashion.

This is the inside of a nuclear reactor’s core. And depending on your point of view it represents all the risk and disaster of Chernobyl, Fukushima and Three Mile Island, an unholy human innovation that, like Frankenstein's monster, will come back to bite us; or, it’s the clean, reliable and scalable solution to our growing energy needs.

It’s important that we figure it out. In America, fossil fuel-fired power plants are the largest source of carbon dioxide emissions, which are driving the climate change that will displace hundreds of millions and cause life-threatening weather events. And because the world’s population is ballooning — it’s expected to hit 10 billion people by 2050 — our energy requirements are rising, too. Global consumption is projected to increase by 56 percent within 24 years.

So how can nuclear, which currently supplies 20 percent of America’s energy needs, help?

In fossil fuel-fired plants, water is heated to create steam that drives turbines in order to generate electricity. In nuclear plants, the process is the same, only instead of burning coal, oil, or natural gas to heat the water — and polluting the atmosphere in the process — H2O is warmed through a clean and highly radioactive method called fission, the splitting of uranium or plutonium atoms in a nuclear reactor. This generates a billion times more energy per reaction than the alternatives, and it does so without releasing any greenhouse gas.

While a coal plant requires an influx of trains bringing a constant supply of fuel, a nuclear plant requires nuclear fuel rods 13 feet long and less than an inch in diameter. Thousands are needed, but they only need replacing every one-and-a-half to two years, and each provides as much fuel as one train of coal. And because this is a very dense form of energy, a plant big enough to supply a city can be housed in a space no larger than your average gym. It’s also more reliable than either wind or solar, which are weather dependent. In other words, nuclear just might be our best shot at a sustainable energy future.

Yet despite all this, critics say, nuclear power plants aren’t worth their exorbitant and unpredictable price tags. One project originally set for launch in Levy County, Florida, this year was shelved after cost projections rose from $3.5 billion to $22.5 billion over the course of five years. These kinds of overruns are typical, as few vendors can supply the specialized equipment necessary, and few construction teams have a skillset for building domes impenetrable by radiation. Regulatory hurdles hike the price further. And because it takes between seven and eight years to build one plant, initiating construction is a risky investment. Another technology for powering the world — say, a foolproof battery for storing renewable energy — may be perfected during that time.

“The pressure on the industry today is really cost,” Gary Was, PhD, Professor of Nuclear Engineering and Radiological Sciences at University of Michigan, told Salon. “The price of gas is really low, which is putting tremendous pressure on nuclear plant operators. But if there were a carbon tax — some kind of penalty attached to greenhouse gas emissions -- this would radically change the economic landscape, making coal and gas radically more expensive. Nuclear, by comparison, would be the cheapest form of energy available.”

Contributing to the unlevel playing field? The public perception of nuclear. Asked to complete a word association game, most Americans would likely respond to “nuclear” with any combination of “disaster,” “meltdown,” “apocalypse,” or “freaky, mutated, two-headed squirrel/fish/dog.” Our fear is the reason one of Superman’s most formidable comic book nemeses, Nuclear Man II, was born from a nuclear missile.

The worries are justifiable. If you were to come into contact with a nuclear fuel rod, you’d receive a fatal zap of radiation within seconds. However, the concern may also be overblown. The fuel inside a reactor is separated from the outside world by layers of thick steel and concrete, in a structure required by law to withstand the impact of a passenger airplane. In fact, because regulations are so stringent, the amount of radiation escaping at any given time from the smokestack of any coal-fired plant in America is greater than the amount escaping from any given nuclear plant.

And even the issue of disposing of nuclear waste is, according to some experts, a molehill made into a radioactive mountain. Firstly, there’s a relatively small amount of it — all of the nuclear waste produced to date in America, if laid out in one spot, would fill a space no larger than a football field piled six feet high. Secondly, we have the materials for encasing the spent fuel rods underground to keep their contents from leeching into the environment. It is public perception — not scientific risk assessment -- that killed plans for using Nevada’s Yucca Mountain as a nuclear waste repository during Obama’s first presidential term. It would have been the nation’s first long-term solution.

“Nuclear waste is extremely radioactive, but carbon dioxide is not benign, either,” Was told Salon. “CO2 a stable molecule that, unless absorbed by plants, will be here for billions of years. One of the solutions is carbon capture and storage underground, but there have been eruptions that have killed entire villages. Whereas, the radioactivity of nuclear waste drops to background levels, or what you might find in your own backyard, after 300,000 years. And, while it’s more expensive and not yet happening in the U.S., reprocessing technology exists to make this drop happen in as few as 300 years.”

But none of this addresses the worst-case scenario: the possibility of a nuclear meltdown. We may have corrected for problems with technical communication and the lack of safety culture that contributed to the disasters at Pennsylvania’s Three Mile Island and Ukraine’s Chernobyl. The latter, 1986 event was the world’s largest nuclear tragedy, and will likely be responsible for a total of 4,000 deaths, according to the Chernobyl Forum. But the more recent meltdown at Fukushima, prompted by an earthquake and 49-foot tsunami, shows that humans will never be able to predict and prevent all fatal mechanical failures.

How we assess the risk depends on who we listen to. Researchers from the Swiss Federal Institute of Technology in Zurich and Aarhus University in Denmark recently released a report putting the chance of another Chernobyl-scale disaster before 2050 at 50/50. Other terrifying reports indicate continued expansion of the nuclear power industry will necessarily lead to nuclear weapons proliferation, since the fuel used to power a reactor is the same used for building a nuclear bomb. Whereas, the United States Nuclear Regulatory Commission paints a rosier picture: “The average number of significant reactor events over the past 20 years has dropped to nearly zero. Today, there are far fewer, much less frequent and lower risk events that could lead to reactor core damage.” In fact, no civilian has ever died on American soil due to the operation of a nuclear plant, but upwards of 5,000 deaths a year are attributed to particle pollution from the coal industry. As for the potential rise of nuclear weaponry? Some might say it’s too late to put the genie back in the bottle — or, as Was told Salon: “Commercial nuclear power didn’t give rise to nuclear weapons; it’s the other way around.” The International Atomic Energy Agency actively safeguards against proliferation.

Part of the push to power ahead comes from advancements in technology that will make the industry safer. Take this tsunami and hurricane-proof floating platform project out of MIT, which would moor a nuclear power plant to the seafloor. There’s also buzz around LFTR, a new kind of reactor that runs on a different type of radioactive chemical element: thorium. In an emergency, unlike traditional reactors, LFTR will safely discharge fuel and halt fission reactions to prevent meltdown. It will also produce less waste, and the waste it does produce will cease to be toxic in just 350 years. Though a commercial roll-out could feasibly happen in just five years, the process of regulating and licensing isn’t slated to begin for another 30.

In America, at the same time we’re opening new nuclear plants — including the Tennessee Valley’s Watts Bar II, which launched in October as the first commercial nuclear reactor brought online this century — we’re closing down many of the 99 nuclear plants in operation on our soil, for reasons of cost and risk. Whether America and the world push forward with nuclear, which is the prediction of the International Energy Agency, or scale back on the controversial source remains to be seen.

Throughout his campaign, president-elect Donald Trump vowed to dismantle Obama’s Clean Power Plan, finalized last year, which creates incentives for clean energy technologies, including nuclear. On the other hand, he told Fox News: “I’m in favor of nuclear energy, very strongly in favor. If a plane goes down, people keep flying. If you get into an auto crash, people keep driving.”

Until we have a better idea of America’s nuclear future, it’s reasonable to feel a little torn. Even Nuclear Man II, as dangerous as he was, is someone whose power we couldn’t help but admire.