The CW series gets real — just in time 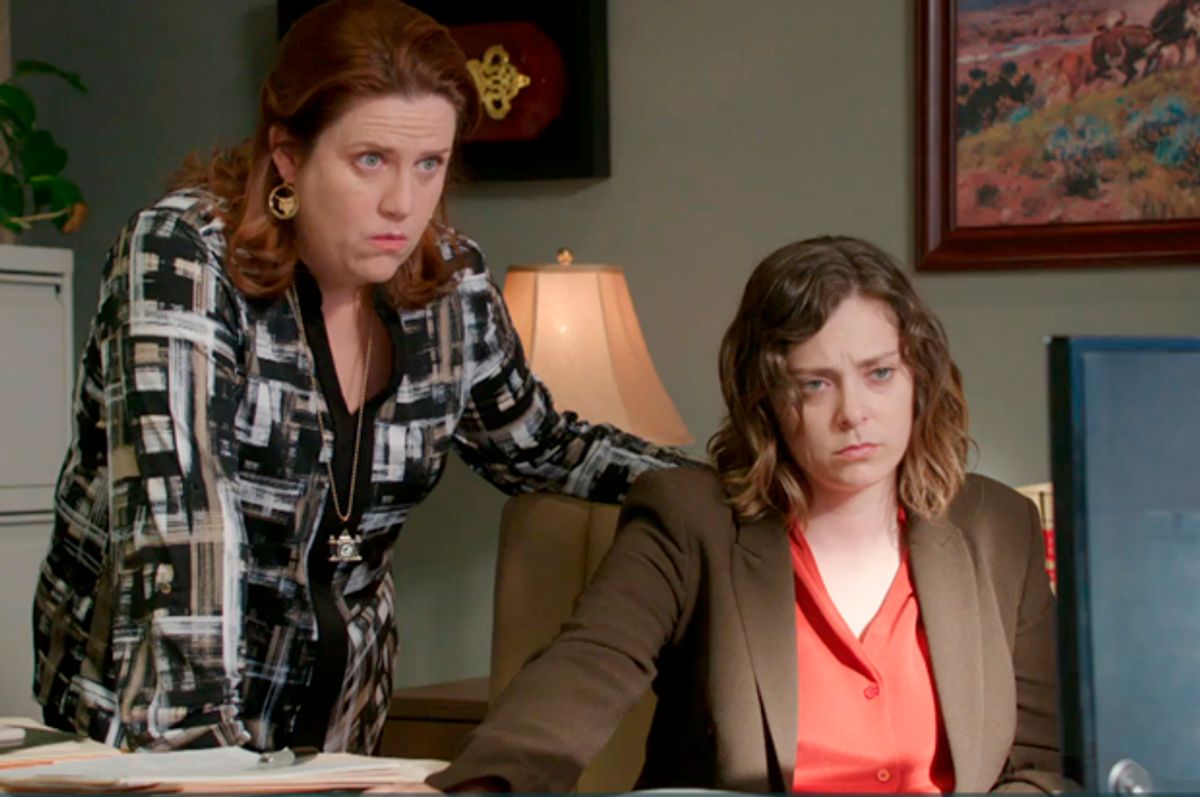 Warning: Spoilers ahead for the most recent episode of "Crazy Ex-Girlfriend."

Television loves a good pregnancy plotline. It's the twist that gets thrown into sitcoms and dramas, preferably stretched out over an entire season when possible. There are often questions of who the daddy is and how to either hide an expanding belly or pretend to have one when a pregnancy isn't really there.

Yet rarely, even in 2016, does the simple reality of what happens in millions American women's pregnancies get acknowledged. So in a week when a man who says women who get abortions should be "punished" secured the Electoral College vote (along with a running mate who's actively worked to do just that), praise be to "Crazy Ex-Girlfriend" for getting real about abortion.

Show co-creator and star Rachel Bloom's defiantly dark, funny musical series has already literally danced around difficult topics like alcoholism and mental illness. But in an episode from earlier this month, the show took yet another turn when the titular character Rebecca convinces herself she was pregnant — and promptly lives up to her "crazy" side.

As the story unfolds, however, it becomes clear she isn't the only character waiting on Aunt Flo. Rebecca's best friend Paula, (Donna Lynne Champlin) after finally pulling together her struggling marriage and deciding to go to law school, finds herself facing the dawning realization that she might be the knocked-up one. The episode ends with her bursting into tears at the prospect of finally having her dreams within reach, followed by the crushing comedown of a telltale plus sign on the pregnancy test stick.

On Friday's episode, Paula and her husband Scott — who only recently have been happily discovering that you get sex props overnight thanks to Amazon Prime — grapple realistically about what to do with the sudden development. Her son eats mustard out of the jar and is suspended from school because "some kid got his book in my fire."

Scott can't even figure out if they have stamps in the house. But he also knows to be the one to ask her, gently, "You sure you want another baby? There are . . . . options," suggesting that that they can just not mention it to God. Initially, Paula rejects the idea, countering, "I am a married mother of two. Those options are for teenagers the month after winter formal."

That, in typical television parlance, would normally end the conversation. See, there was that gentle nod to that thing, you know, the one referred to in the movie "Knocked Up" as "rhymes with smashmortion." That's all we needed, right?

Certainly when Rachel has an ill-timed consequence of a night of sex with her ex, Ross, on "Friends," the idea she could terminate the pregnancy isn't really discussed, right? When career-driven Miranda gets pregnant on "Sex and the City," she gets as far as going in for the procedure before backing out and moving on to motherhood.

At least "Jane the Virgin's" entire premise rests on the deep religious convictions of its characters, for whom the pregnancy that its central character never consented to is a weird but welcome "miracle." Television is littered with false pregnancies and convenient miscarriages when it wants the bang of a pregnancy storyline without the follow through of the consequences.

But honest depiction of reproductive choice is scarce. That the best recent example comes from the animated "Bojack Horseman" should tell you something.

How refreshing then, that on "Crazy Ex-Girlfriend," Donna soon bears out the truth that, as Lauren Slater wrote earlier this year in Elle, "Married Moms Get Abortions, Too." In fact, nearly 60 percent of women who obtain abortions already have children. Remember that when someone says that women who get abortions hate life.

Later in the episode, Paula prepares and presents a lengthy brief she had done for her firm, admitting she's not a lawyer but that "I really wanted to be one." And when she hears the words, "If you ask me, you'd make a damn good attorney. Paula Proctor, esquire — it's got a nice ring to it, doesn't it?" something inside her clicks. She smiles. Then she sighs. Then she chooses. It's a bang-up performance, and Champlin nails Paula's bittersweet ambivalence.

In her next scene, Paula is seen drowsily reading in bed, as Scott brings her a warm beverage. "Doing OK?" he asks and she replies, a little sadly, "Yeah. Not too bad." He tells her, "The doctor says you might need to rest up a bit. I was going to make dinner, but then I figured you've been through enough today. So I'm ordering pizza." Then as the doorbell rings, her son Brendan calls out offscreen, "Mom! I'll get it since you just had an abortion." She drily replies, "You're a good son."

Despite the obnoxious narrative that women who exercise their constitutional right to choice are just selfish young party gals, women tend to be sentient creatures for whom abortion is a moment on a road — one that often includes motherhood. In the end, Paula never tells her friend Rebecca that she has an abortion or that she was pregnant. Her choice was hers to make and hers to share as she saw fit. But for "Crazy Ex-Girlfriend" to make abortion an action that women take and then move on from feels especially important to show right now. As long as women still have . . . options, thank God for stories that discuss them.