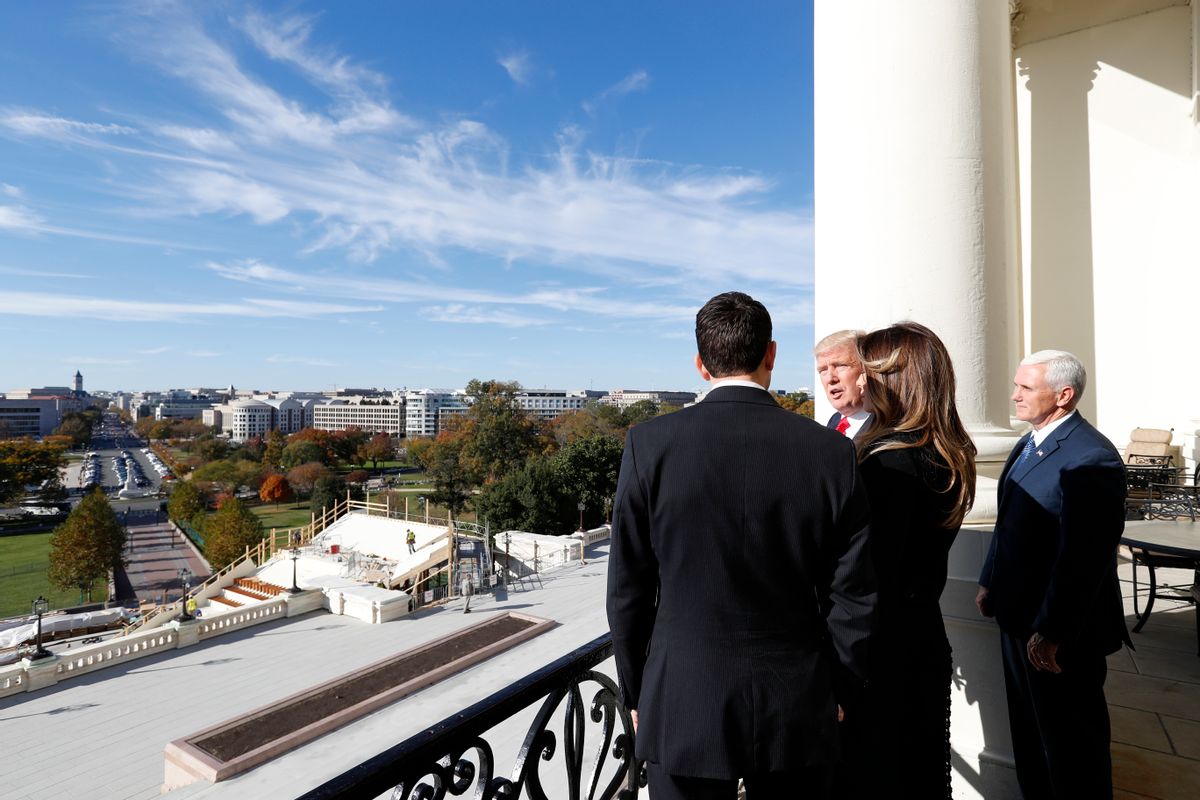 House Speaker Paul Ryan of Wis. shows President-elect Donald Trump, his wife Melania and Vice president-elect Mike Pence the view of the inaugural stand that is being built and Pennsylvania Avenue from the Speaker's Balcony on Capitol Hill in Washington. (AP)
--

Early reports regarding Donald Trump's presidential transition team suggest that its members are woefully ill-equipped for the task of governing America, with 10 weeks to go.

According to a report on Sunday from The Wall Street Journal, Trump's victory surprised his own top advisers so much so that the team didn't prep the president-elect in the day-to-day operations of the West Wing. As a result, Trump now needs a crash course in how to do the presidency:

During their private White House meeting on Thursday, Mr. Obama walked his successor through the duties of running the country, and Mr. Trump seemed surprised by the scope, said people familiar with the meeting. Trump aides were described by those people as unaware that the entire presidential staff working in the West Wing had to be replaced at the end of Mr. Obama’s term.

The "landing team" designed to smooth the transition process was supposed to have announced its chief of staff decision on Friday and begin restaffing various federal agencies this week. But New Jersey Gov. Chris Christie was abruptly removed as leader of the transition team due to the ongoing Bridgegate scandal, and Trump had to replace him with Vice President-elect Mike Pence, which delayed the process.

Although Trump's selection of the Republican National Committee chairman Reince Priebus as chief of staff was an important first step, it came on Sunday, five days after Trump's election. Barack Obama, on the other hand, named Rep. Rahm Emanuel as his chief of staff only two days after his victory in the 2008 election.

As the Journal also reports, that this may explain why sources who knew about Trump's first meeting with President Obama said that the incoming president was unaware of the scope of responsibilities facing him, particularly the need to replace the entire presidential staff in the West Wing. As a result, Trump is expected to spend more time with Obama than is usually the case for an incoming president and his predecessor (perhaps not surprising, given that Trump is the first president who hasn't previously served in either the government or the military).

“The difference between President-elect Trump and a politician is that Trump puts a premium on making the right decision, not the politically expedient one," explained Jason Miller, communications director for the Trump transition team. "President-elect Trump’s excellent judgment and temperament [have] served him well in business and in life, and he’s not going to be swayed by a bunch of political insiders responsible for filling up the swamp in the first place.”