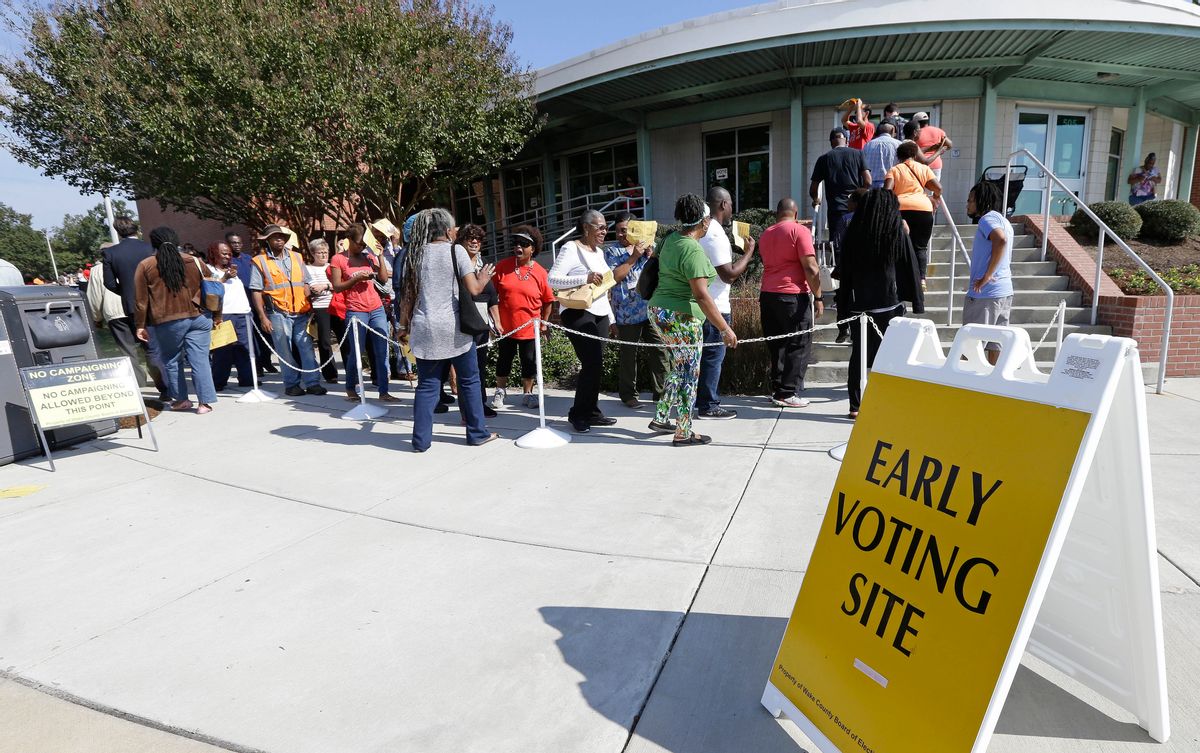 FILE - In this Oct. 20, 2016 file photo , voters line up during early voting in Raleigh, N.C. Fourteen states had new voting or registration restrictions in place for the 2016 presidential election, raising concerns that minority voters in particular would have a harder time accessing the ballot box. (AP)
--

Donald Trump spent the final weeks of the 2016 election claiming that the contest was being rigged. It turns out he was right; the Republican Party's years-long effort at suppressing minority voters effectively rigged the election in his favor.

“When we look back, we will find that voter suppression figured prominently in the story surrounding the 2016 presidential election,” said Kristen Clarke, the president and executive director of the Lawyers’ Committee for Civil Rights Under Law, in an interview with McClatchyDC.

Because this was the first presidential election in nearly 50 years in which the Voting Rights Act of 1965 wasn't fully applied, swing states were able to restrict the franchise in ways that may have been consequential in Trump's winning the Electoral College tally (he lost to Hillary Clinton in the popular vote). In Wisconsin, for example, Voter ID laws disproportionately targeted nonwhite voters and, according to the executive director of Milwaukee's Election Commission, resulted in the city's turnout dropping by roughly 41,000 voters. Trump won the state by fewer than 18,000 votes.

Overall, election watchdog groups “have documented beyond any doubt that voter suppression and a conscious effort to shave off 1 or 2 percent of the vote in key states, in all likelihood, influenced the outcome of this election,” said Wade Henderson, president of the Leadership Conference on Civil and Human Rights, during an interview with McClatchyDC.

The leadership conference also issued a report finding that 43 percent of counties that had previously been covered by the Voting Rights Act reduced their number of voting locations, resulting in 868 fewer sites in which predominantly nonwhite and poor voters could cast their ballots.

Section 5 of the Voting Rights Act protected minority and low-income residents of states that had a history of discriminating against these traditionally Democratic-leaning groups. It required any changes in voting rules to be pre-approved by the U.S. Department of Justice.

In June 2013, however, the Supreme Court overturned this provision under Shelby County v. Holder, arguing that it was unnecessary. Since that case, states have reduced the number of polling places, purged voters from the rolls and implemented various ID laws and other voting requirements without fear of being held accountable for potentially attempting to disenfranchise voters.