The ultimate inside job: Donald Trump's transition team is a sordid new swamp of lobbyists, donors, family and Republican retreads

Drain the swamp? Instead, Trump transition team is revealed as a brand-new bog of cronyism and influence peddling 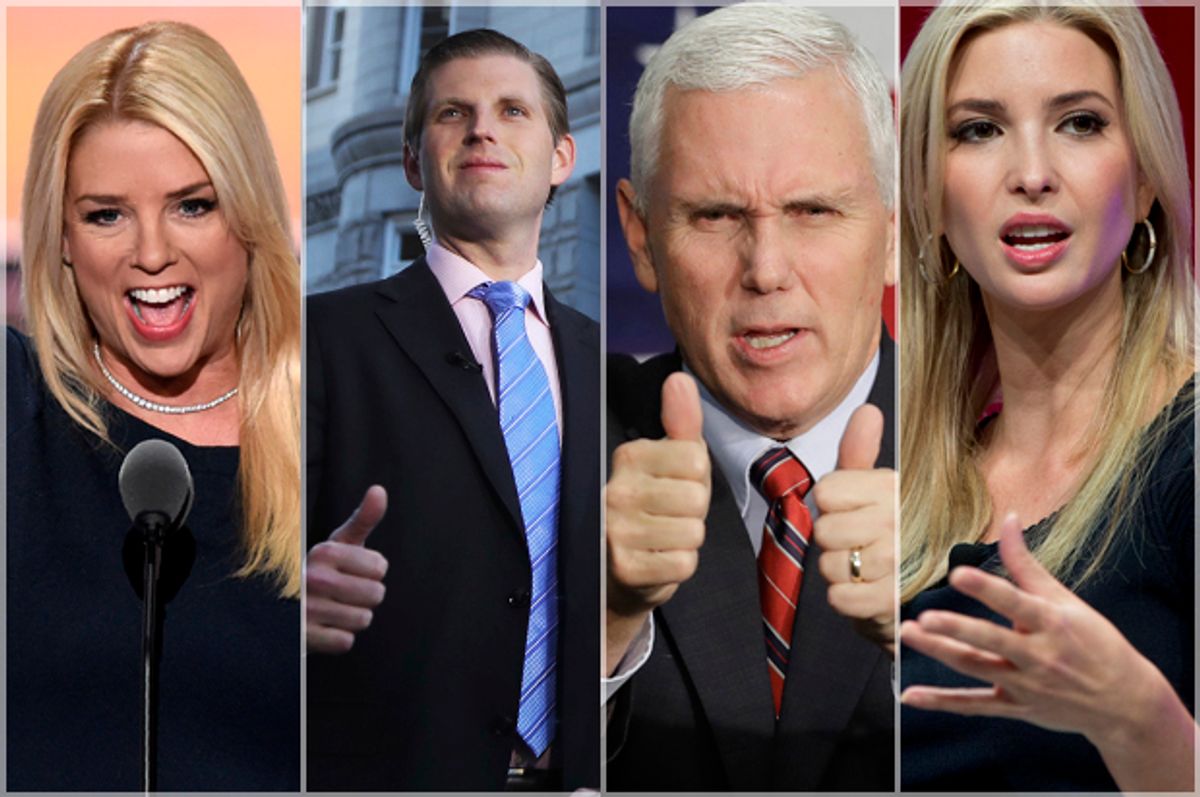 One could almost feel sorry for Chris Christie, if that dignity train had not left the station months ago. Tapped to lead Donald Trump’s transition team after he was passed over in favor of Mike Pence for the vice presidential slot on the Republican ticket, Christie was replaced as head of the team on Friday by … Mike Pence.

The move is unsurprising for two reasons: For one, Pence is a former congressman who served with some of Capitol Hill’s current leaders. The New York Times reported that, with the campaign — along with most of the rest of the civilized world — caught somewhat off-guard by Trump’s surprise win, there was a need to ramp the process up quickly. That means letting Pence and his closest aides tap contacts throughout Washington for help, contacts that Christie likely lacks.

The second reason is Christie’s legal status over the Bridgegate affair, which remains unclear in the wake of the recent convictions of two of his close aides. There is still a slight chance he could be indicted on charges related to the scandal, or possibly impeached by New Jersey’s legislature. No wonder he said this week he would be “open” to taking a job in the Trump administration, depending on what job he is offered. Ladies and gentleman, please meet the Special Oval Office Assistant for McRib Runs, Chris Christie.

On the other hand, it is hard to believe that Trump cares even one iota about whether his advisors are ethically (to say nothing of criminally) compromised. One only has to look at the rest of Friday’s press release, in which he announced a series of additions to the team’s Executive Committee, to see that.

The list of new additions who will give input on all aspects of the transition such as White House and executive-agency staffing decisions, Inauguration planning, and the other million little decisions the Trump team has to make in the next 66 days is a study in nepotism and cronyism. There is Peter Thiel who donated $1.25 million to the Trump cause. There are three of Trump's adult children and a son-in-law. And nothing gives the lie to Trump’s promise to “Drain the swamp” in Washington faster than this list. You couldn’t find a more comprehensive group of Republican has-beens and reprobates if you turned over every rock on a Superfund site.

In the category of ethically dubious insiders, there is Newt Gingrich, a man who left his office in the House of Representatives 18 years ago under a dark cloud of ethics violations but has hung around the city since, working for think tanks and advising former president George W. Bush. He even advised Hillary Clinton when she was a senator in 2005 on a bill to create electronic databases of patient info and reduce paperwork for hospitals. He is as insider as an insider can get in the capital.

There is Florida Attorney General Pam Bondi, who two months ago was answering charges she had once dropped a fraud probe into the president-elect’s Trump University in exchange for a $25,000 contribution to a political group connected to her re-election campaign. Bondi’s appointment comes two weeks before the scheduled start of a fraud trial over Trump University, this one in California, in which Trump may be called to testify.

A normal president-elect would not want Bondi’s entanglements anywhere near him when he is trying to get his administration off the ground. Trump not only does not seem to care, he is unlikely to hear an unkind question from the press over it.

There is retired Army general Michael Flynn, former head of the Defense Intelligence Agency, who resigned from that post after clashing with the Obama administration. Flynn has been criticized in some circles for his “friendly ties” to Russia, a country accused of meddling in the election on Trump’s behalf. America was introduced to Flynn this summer when he gave one of the angriest speeches ever seen in primetime at a major-party political convention, during which he encouraged chants of “Lock her up!” directed at Hillary Clinton.

There is Rudy Giuliani, rumored to be on the short list for Attorney General and still floating the possibility of following through on Trump’s campaign promise to prosecute his political opponent on unspecified charges, a threatened abuse of power that would have demolished another candidate’s campaign in a normal year.

There is Steve Bannon, head of Breitbart and Trump’s campaign CEO, who turned his “news” site into Trump’s personal propaganda arm and has brought white supremacy and ethno-nationalism explicitly into Trump’s circle. He’s rumored to be under consideration as Trump’s chief of staff, by the way.

Nothing reinforces the tragedy this election has foisted on the nation than investing people this venal and dumb with as much power as they are about to gain. And nothing reinforces the emptiness of Trump’s populist platform as much as this list. The people on it represent a mixture of cronyism, nepotism (Trump’s three eldest kids and his son-in-law are also advising the transition), shady legal and ethical ties, and influence peddling that might make Richard Nixon blush.