Fascinating world views from mourning in front of the Bataclan concert hall to protesters rallying in St. Louis 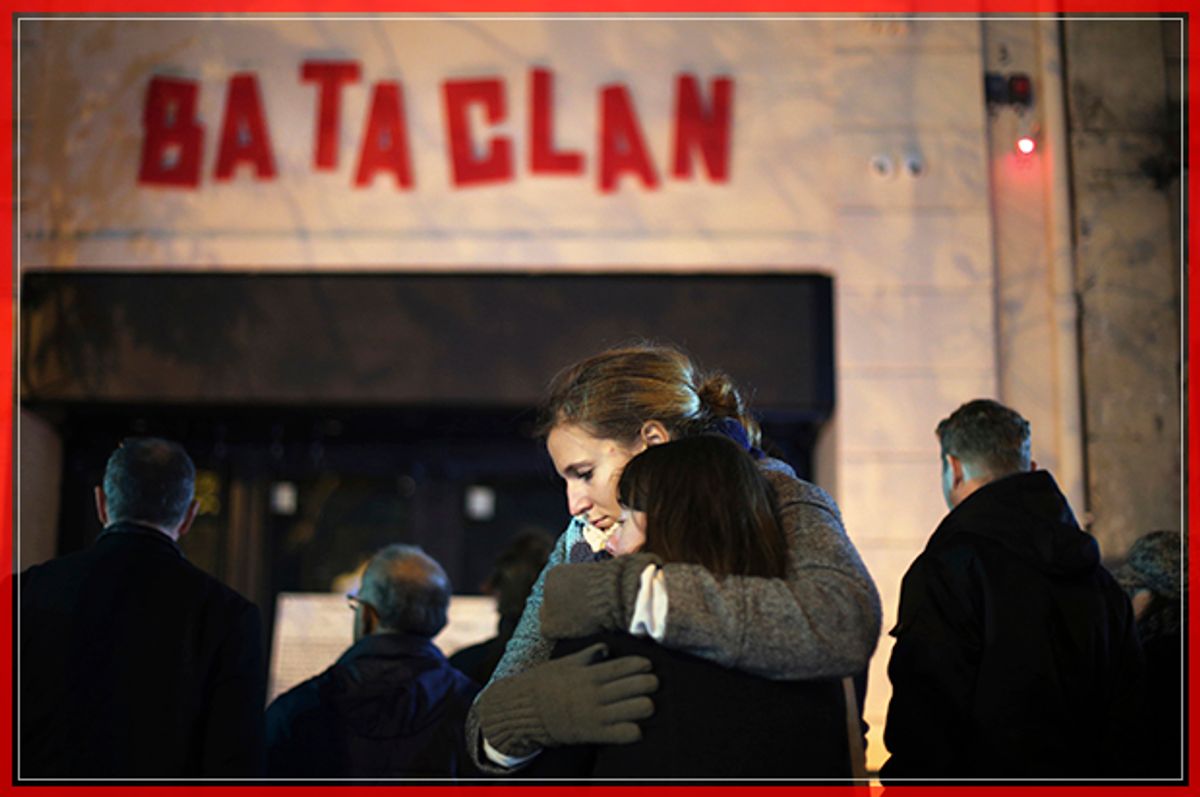 Women hug, in front of the Bataclan concert hall in Paris, Sunday, Nov. 13, 2016. France marked the anniversary of Islamic extremists' coordinated attacks on Paris with a somber silence on Sunday that was broken only by voices reciting the names of the 130 slain, and the son of the first person to die stressing the importance of integration. (AP Photo/Thibault Camus) (AP)
--

Chiang Mai, Thailand   Lillian Suwanrumpha/Getty
Paper lanterns are lit and cast off in honor of the annual Yi Peng festival When I see sky lanterns, I'm reminded of Elizabeth Bishop's poem "The Armadillo," in which she describes traditional Brazilian "frail, illegal fire balloons" released into the sky to celebrate a saint's day as “the paper chambers flush and fill with light / that comes and goes, like hearts.” In the poem, she juxtaposes the startling beauty of the floating lanterns, which rise to mingle with the stars, with the sudden violence they can cause as one "splattered like an egg of fire / against the cliff behind the house" setting the nest of two owls, who flee the scene, on fire. We carry the potential for beauty and destruction often in the same hands.

London, England   Daniel-Leal Olivas/Getty
'James' the cat peers out of the window of the Ecuadorian Embassy Have we not learned anything? The last thing this world needs are more red, asphyxiating ties of frightened masculinity. In the single year since the Paris terror attacks that left 137 people dead, the UK has moved forward on Brexit and the America elected a man who vows to enact a "complete shutdown of Muslims entering the United States." See that grief? See that pain? You haven't seen the last of it. One miscalculation we should not make about our newly elected president is to confuse his victory with popularity. Just look at the contrast on display in the few days since he won: while top politicians and media elites have quickly moved to accept and normalize Trumpism, people have flooded the streets in cities across the country to protest a successful campaign of racial division and xenophobia. Donald Trump may have won an election, but he's still widely loathed by the country. If the dismissal of voter anger is what landed us in this mess in the first place, I'm not sure why we'd move so quickly to repeat that mistake.