Can't be taken away: Marriage equality is safe, no matter who Donald Trump chooses for the Supreme Court

A dizzying array of social progress is on the chopping block, but same-sex marriage rights aren't going anywhere 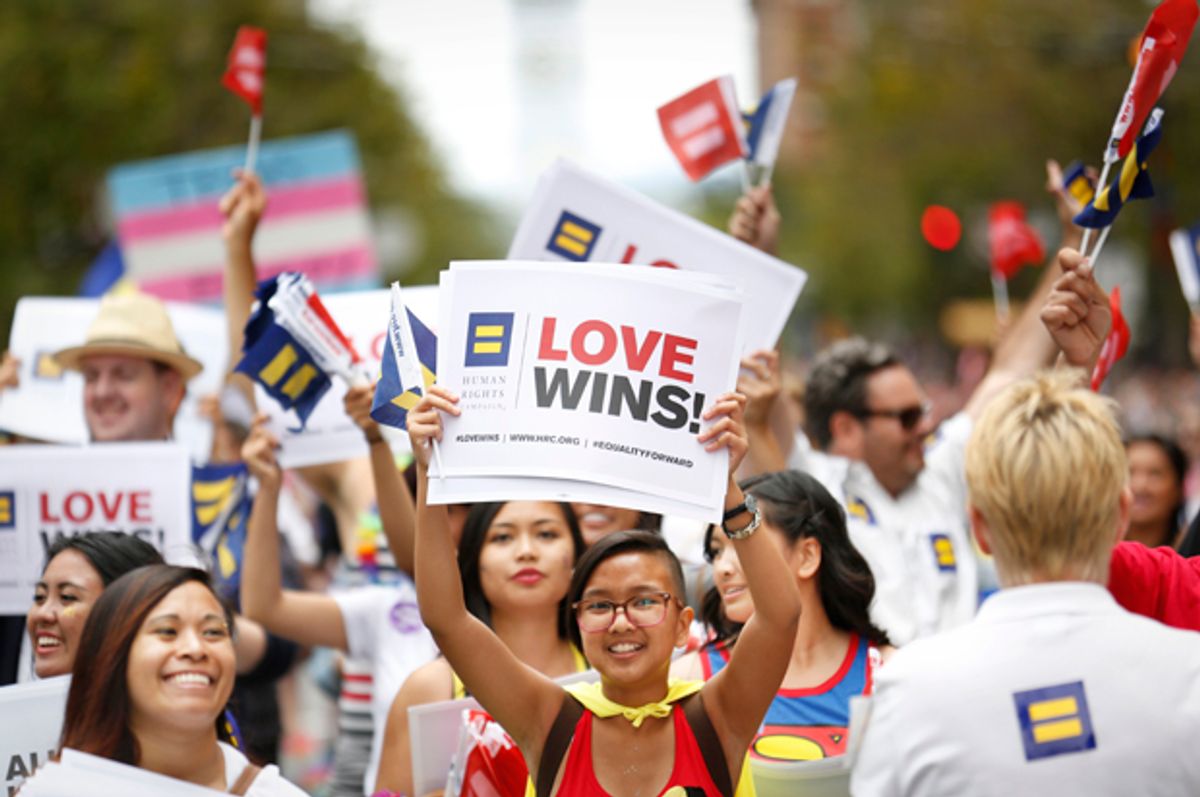 In the end, Sen. Mitch McConnell was right to bet that he and his fellow Republicans could simply stall on hearings to confirm Merrick Garland to fill the Supreme Court seat that was vacated when Antonin Scalia died last spring. Not only did they not pay any real political penalty for it — the mainstream media was too wrapped up in horserace election coverage to give much attention to Republican obstructionism — but now Donald Trump is going to give them the reactionary monstrosity that they've long dreamed about as a judge.

Panic is the correct reaction to this fact. Before Scalia died, the court was already gutting a litany of civil rights protections and throwing out laws meant to protect our democratic system. (The gutting of the Voting Rights Act was instrumental in helping Trump win.) Replacing Scalia with someone similar will mean more of the same. The upcoming devastation to civil rights, reproductive rights and campaign finance law will be stunning.

"I think for a President Trump to undo what happened in Obergefell," Dan Canon, the lawyer for the Kentucky plaintiffs in that case, explained over the phone, "you’d have to have a number of really improbable things happen."

“I don’t want to say 'don’t worry about it,' and then six months from now we have to worry about it," he hastened to add. "But I think Supreme Court opinions are probably the least vulnerable things in a Trump presidency that anyone has to worry about.”

For one thing, simply replacing Scalia with another right-wing judge isn't enough to tip the court against gay rights. Scalia was alive for the Obergefell decision and voted against it. But Justice Anthony Kennedy, a conservative on many issues, broke for gay rights on this decision. That balance will not change.

There's always a chance that one of the more liberal justices, like Ruth Bader Ginsburg (who is 83 years old) or Stephen Breyer (who is 78), retires or passes away. If that happens, Trump and his Republican Congress will be able to appoint another conservative and tip the court definitively against gay rights. That might be a problem with other cases, but it almost certainly won't mean that conservatives will be able to undermine legal gay marriage.

For one thing, in order to revisit the Obergefell decision, you'd need to have a plaintiff. And it can't just be anyone who happens to object to same-sex marriage. Such a plaintiff would have to prove that he or she had standing to sue in court — which means arguing that you have suffered injury.

So while one should never say never, especially after everything that has happened in politics over the past year or so, this is one situation where you can rest easy. Even if someone had the gall to claim that they had somehow been injured by someone else getting married, the courts don't have to take that seriously. The odds that the Supreme Court would bother hearing this argument out are infinitesimal.

Nor should there be much concern about a Trump administration finding some other way to do harm to same-sex couples. Even if Trump wanted to pass policies denying same-sex couples the rights and benefits that opposite-sex couples have, there's no legal pathway to do it.

“They can’t do anything to gay couples just because they’re gay," Canon explained. So the only avenue that the Trump administration would have to punish and harm same-sex couples would be to pass laws that "stick it to all couples," Canon continued. They could, for instance, make it harder for people to inherit from a spouse or to get Social Security benefits. But in order to do that, they'd have to do it to straight couples, too, and there's no reason to think Republican legislators are interested in such measures.

The structural obstacles preventing Trump for ending legal gay marriage are largely insurmountable. Unfortunately, that isn't true when it comes to other civil rights, such as abortion rights, which I'll be addressing in my next article.

But if you're planning to get married to someone of the same sex, and you're worried that President Trump will somehow find a way to roll back that right by the time the wedding date rolls around, don't sweat it. Send out those invitations and order that cake. Your marriage plans are safe.