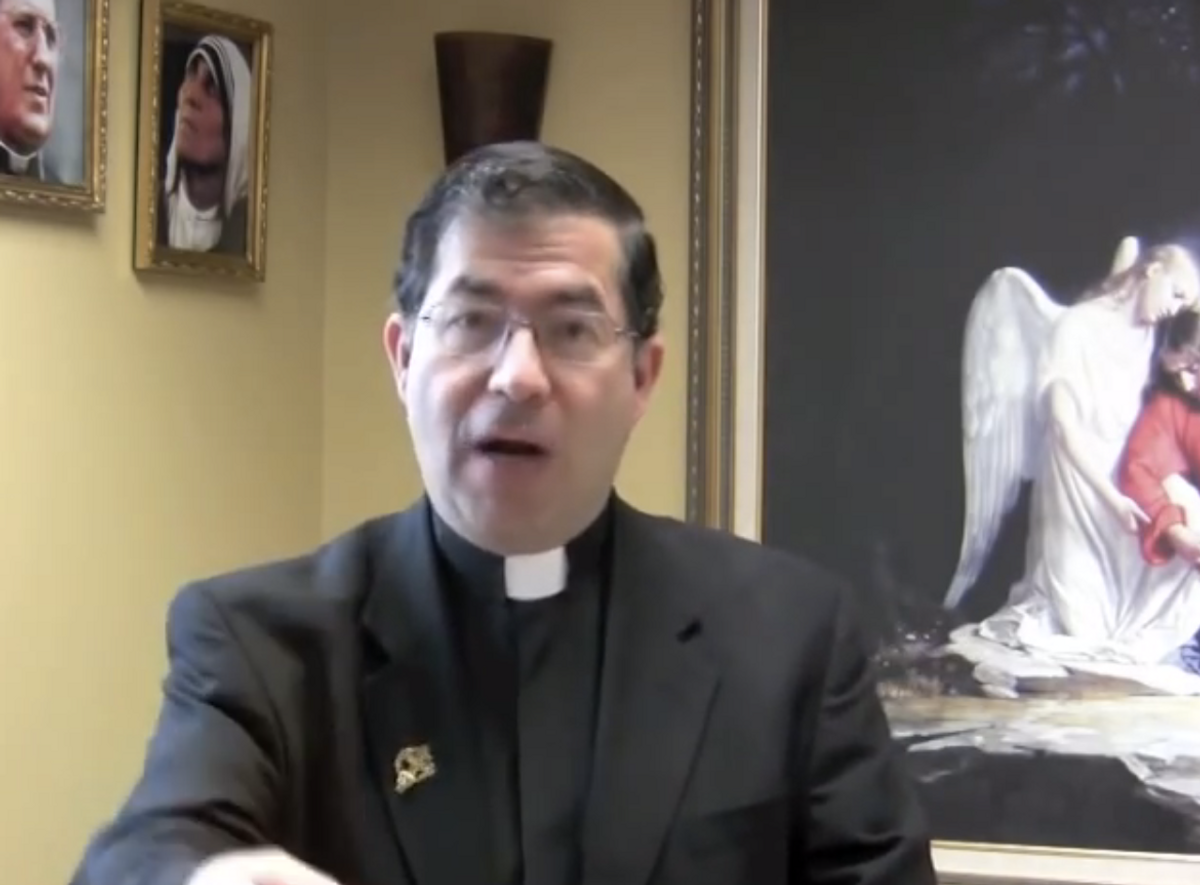 The Rev. Frank Pavone, a controversial Texas priest, is coming under criticism from his church for publicly displaying an aborted fetus in a video encouraging Roman Catholics to vote for Donald Trump.

In the Facebook videos (which have been deleted), Pavone placed what he said was an aborted male fetus onto an altar as he delivered a political speech.

“I am showing him to you because in this election we have to decide if we will allow this child killing to continue in America or not,” he said. “Hillary Clinton and the Democratic platform says yes, let the child killing continue —and you pay for it. Donald Trump and the Republican platform says no; the child should be protected.”

In a written statement, Bishop Patrick Zurek of the Texas diocese where Pavone serves condemned the “desecration” and said that he was “opening an investigation” into the priest’s videos. Pavone is currently listed as a member of Trump's Catholic Advisory Group.

“Father Frank Pavone has posted a video on his Facebook page of the body of an aborted fetus, which is against the dignity of human life and is a desecration of the altar,” he wrote. “We believe that no one who is pro-life can exploit a human body for any reason, especially the body of a fetus.”

Zurek also noted that Pavone’s organization, Priests for Life, is a civil institution and not operated by the Catholic church.

The investigation into Pavone’s conduct came after he received an outpouring of outrage from high-ranking Catholic officials, including Ed Mechmann, director of public policy for the Archdiocese of New York, who called the fetus display “absolutely appalling.”

After his Facebook videos provoked thousands of negative comments, Pavone posted an Election Day message on the social-media service offering “a sincere apology” but shifting the blame to his critics and supporters of former Democratic presidential candidate Hillary Clinton.

“We today, this Election Day, have to stop Hillary Clinton and the Democrats from having power in this country,” he said. “Some people say, ‘Oh, Father Frank, you’re out of your mind.’ You know what? Maybe that’s the place for normal people to be when we’re living in the middle of a holocaust and many people are ready to elect a woman who cares nothing about these babies, who wants us to pay for their destruction.”

“And you know what the scandal also is?” he continued. “It’s not about me. It’s about people going to the polls right now, voting for Clinton, voting for the Democrats and either being oblivious to the reality of these babies or just not caring and pretending, 'Oh, there are so many other issues.'”

Pavone has long been a figure of political controversy. Last year, he appeared to argue that Planned Parenthood was to blame for a shooting rampage that took place outside one of its offices.