Donald Trump's trying to give his kids top secret security clearance, making sure his conflicts of interest are extra bold 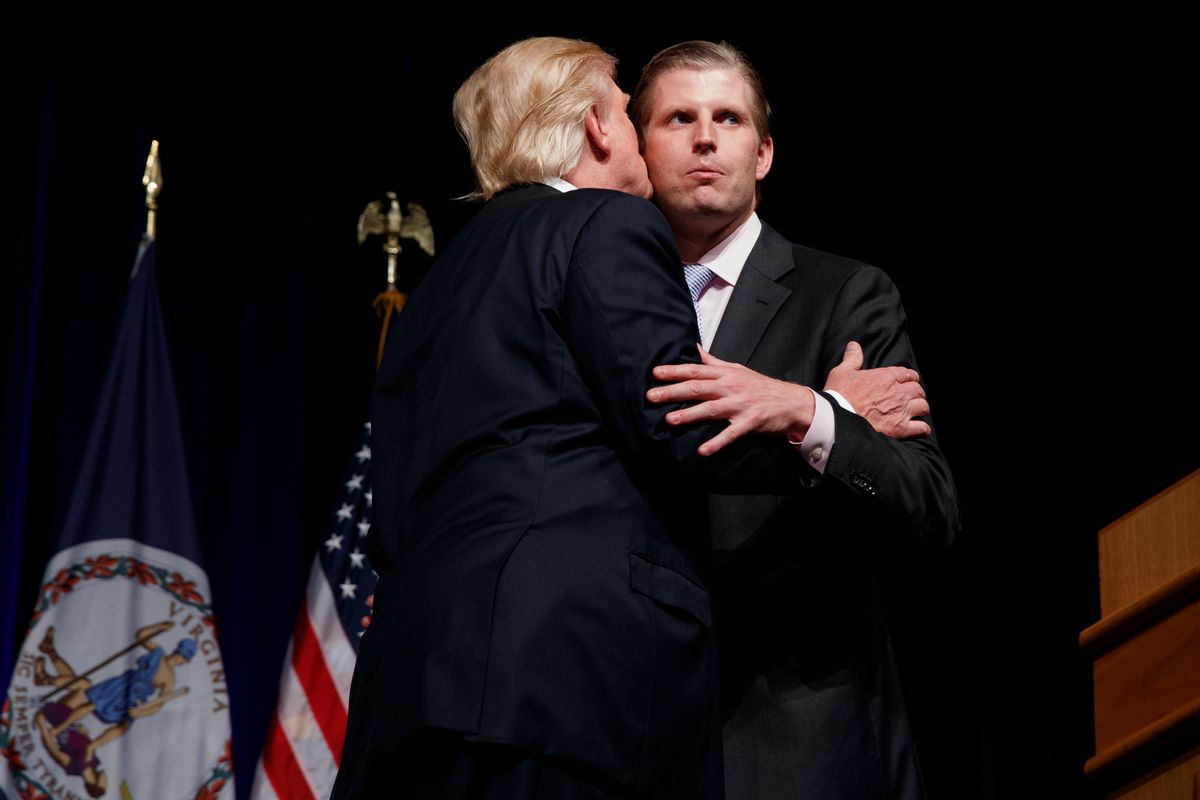 We’re not even a week into the still-indigestible reality of President-elect Donald Trump and the incoming administration is already up to its armpits in conflicts of interest, internal squabbling, heavy-handed recriminations, and absurdist incompetence.

To pick out just one representative example of all this is difficult given that the Trump transition is predictably shaping up to be a vast substrate for corruption and scandal, but if forced, I’m going to have to go with the report that Trump wanted to give his adult children top secret security clearances.

The Trump transition team is denying that such a request was made, but several media outlets have reported that this move was under consideration. And it’s by no means outlandish to think that Trump and his cronies would consider going down this route. After all, Donald Trump Jr., Eric Trump and Ivanka Trump are all part of the transition team that is responsible for staffing the incoming administration and setting the policy agenda.

Mike Rogers, a former chairman of the House Intelligence Committee, who was reportedly ousted from the transition effort as part of a broader “Stalinesque purge” of non-loyalists, issued a statement saying that his national security work would be passed off, in part, to “the Trump family.”

There is, of course, no practical reason for Trump’s kids to be involved in any way with national security or foreign policy decisions. Not one of them has any experience in the field. They are executives in their father’s company, which has substantial overseas interests and thus numerous potential conflicts of interest. As the Daily Beast has reported, there are anti-nepotism laws in place that were designed to prevent precisely this sort of toxic intermingling of personal and governmental business.

But even if the Trump denials are true and the president-elect is not requesting formal access to classified information for his children, what reason do we have to think that they won’t still be “advising” him and roped into national security discussions anyway? Trump has already tipped his hand as to how he intends to run his administration: He’s going to defy the norms and practices intended to prevent conflicts of interest and stonewall anyone who questions him.

The mere fact that Trump’s children are on his transition team at all is a testament to how little respect the newly elected president has for the basic concepts of good government and ethical administration. Remember: Trump’s kids are going to be assuming control of the sprawling Trump Organization once their father takes office. The laughable explanation for how this will work is that the kids will operate it as a “blind trust.”

Even if you were to stretch credulity to well past the breaking point and assume that someone's children can be considered “independent” trustees of his assets, the whole arrangement would still fall apart because Trump’s children are, at this very second, helping him craft high-level government policy as part of his transition.

There is no good outcome from all of this. It’s an unprecedented conflict of interest that will absolutely result in ethical breaches, irresolvable conflicts of interest and unseemly scandals.

And do not make the mistake of extending any benefit of the doubt to the Trumps regarding this arrangement. Do not grant them the unearned presumption of good faith. Loyal Trump surrogate Rudy Giuliani said on CNN over the weekend, “You have to have some confidence in the integrity of the president.” No, actually, we don’t.

Just look at how the Trump campaign was run: The whole enterprise was designed, in part, to funnel money from donors and bundlers into properties owned by Donald Trump and his children. The issue of Donald Trump’s taxes — which is still unresolved because he won’t release his tax returns — also undermines this presumption of financial integrity, given that he boasted of skirting the legal edge of tax laws to dodge paying income tax for two decades. And let’s not forget the fact that the president-elect is staring down a court date as part of a class-action lawsuit against him for massive fraud related to his bogus “university.”

The Trump modus operandi has always been to extract as much personal enrichment as possible in defiance of the spirit, if not the letter, of the law. The two personality characteristics that drive Trump are vengefulness and greed, both of which have already found expression in the gross dramas surrounding his week-old transition effort. Now Trump and his kids will have the power and resources of the federal government at their fingertips, and the presumption that they can get away with pretty much anything. If there’s a scenario by which this won't end in disaster, I can’t think of it.