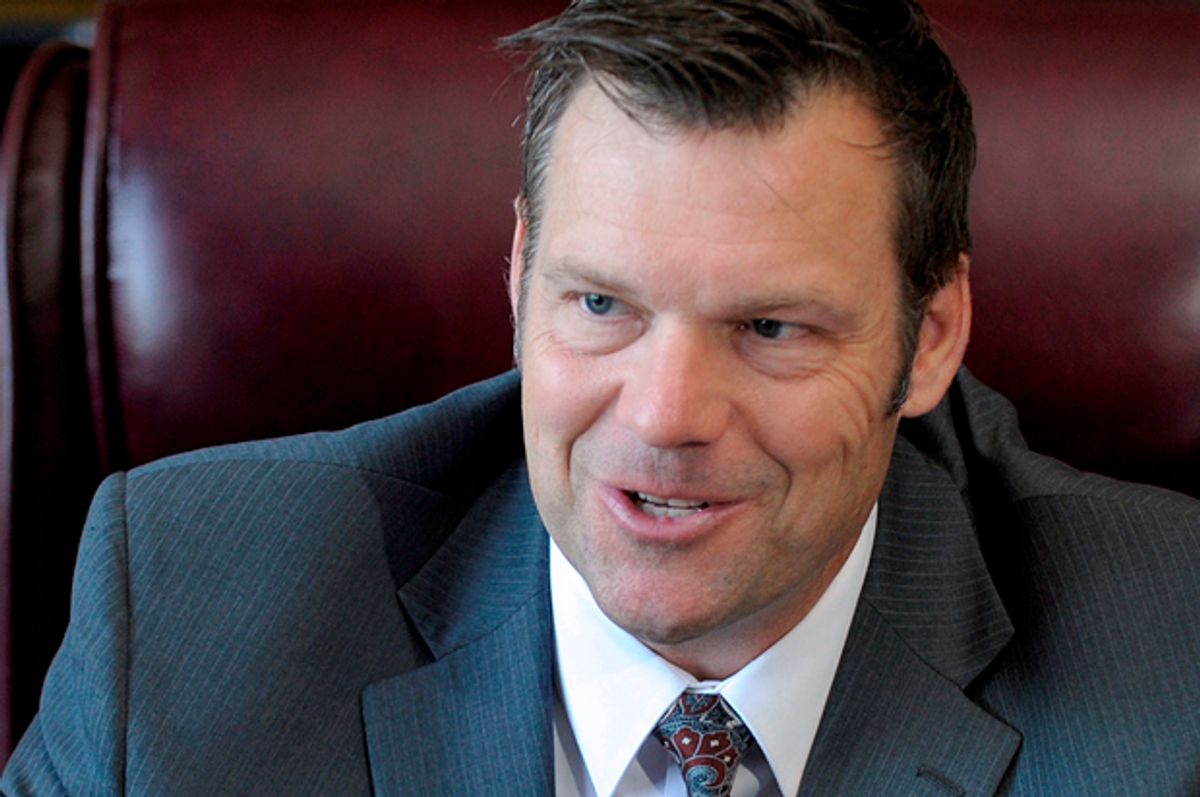 It feels like ancient history now but late last year then-presidential candidate Donald Trump kicked up a massive controversy by endorsing the idea of a “database” for Muslims within the country as a means for fighting terrorism. This was one of the first planks in Trump's national security platform, which is characterized by a consistent eagerness to disregard civil liberties and human rights in the pursuit of safety.

His plans to aggressively use immigration laws to thwart terrorism eventually received its own slogan: “extreme vetting.” Now that Trump is actually going to be president, someone will have to oversee and implement this draconian measure.

That brings us to one of the newest members of the Trump transition team, the wildly anti-immigrant Kansas Secretary of State Kris Kobach, who told Reuters that a Muslim “registry” is indeed in the works. Kobach is apparently mulling the resurrection of the National Security Entry-Exit Registration System, a 2002 program that he helped design and implement while working at the Justice Department under President George W. Bush. That program was both discriminatory and ineffective, and bringing it back wouldn’t accomplish much beyond making the lives of Muslims in America that much more difficult.

Launched in 2002, the National Security Entry-Exit Registration System was a post-9/11 "War on Terror" program that explicitly targeted immigrants from Muslim countries as potential terror threats. The program created a list of 25 specially designated countries (24 of which were majority Muslim, with North Korea as the lone exception) and required non-citizens who hailed from those countries to register with immigration services and keep the government updated as to their movements (if they changed addresses, for example). It also required that people traveling from those countries to the U.S. undergo additional security screening — fingerprinting, photographing and regular check-ins with immigration officials.

Contrary to the Trump transition’s apparent belief, reinstating the National Security Entry-Exit Registration System wouldn’t do anything to prevent terrorism. In fact, at this point it's completely obsolete. The program was rendered inoperative in 2011 when the Obama administration issued an order delisting all the countries whose residents had been singled out for additional scrutiny.

The order stated that other methods of collecting entry and exit data had superseded the registration system and the Department of Homeland Security “has determined that recapturing this data manually when a nonimmigrant is seeking admission to the United States is redundant and no longer provides any increase in security.”

A Homeland Security inspector general report from 2012 recommended that the program be terminated altogether, stating that “there was no longer a value in the NSEERS program” and warning that the continued use of the NSEERS database at certain ports of entry was causing delays and confusion as a result of its “cumbersome design and frequent outages.”

While it was in operation, the registration system's primary contribution to the fight against terrorism was disrupting the lives of Muslims in the U.S. who tried to comply with its rules and regulations. The earliest version of the program had a special registration component that required any male nonresident age 16 and older who was from a country on the watch list to register in person at an immigration office. Nearly 83,000 showed up to register, and more than 13,000 of them were thrown into deportation proceedings — even those who were in the process of obtaining legal residency.

The special registration provisions were scaled back in December 2003, amid questions over racial profiling and the program’s effectiveness. As the Chicago Tribune reported shortly before that, the registrations and deportations were breaking up families and throwing people’s live into chaos but had “not led to a single public charge of terrorism.”

When the National Security Entry-Exit Registration System was finally rendered inoperative nearly a decade later, the American Civil Liberties Union was quick to point out that the program, for all its controversy and disruption, had resulted in zero terrorism convictions.

The Obama administration's pulling the plug on the National Security Entry-Exit Registration System came in recognition of the growing consensus that profiling based on race or nationality (as opposed to behavior) isn’t just ineffective as a counterterrorism strategy; it’s also counterproductive and wasteful.

But the animating force behind the Trump national security ethos has never been effectiveness. Vindictiveness and a wrongheaded idea about “strength” are at the core of the new president's security policies. Resurrecting an initiative that transforms the mere fact of being Muslim into a cause for suspicion will do absolutely nothing to prevent terror attacks. But it meshes nicely with the apparent xenophobic agenda and authoritarian leanings of our president-elect.