Secretary of which state? Rudy Giuliani, America's mayor, has worked for many countries not named America

Giuliani, a top contender for secretary of state, has personally pocketed millions from Qatar, Venezuela and others 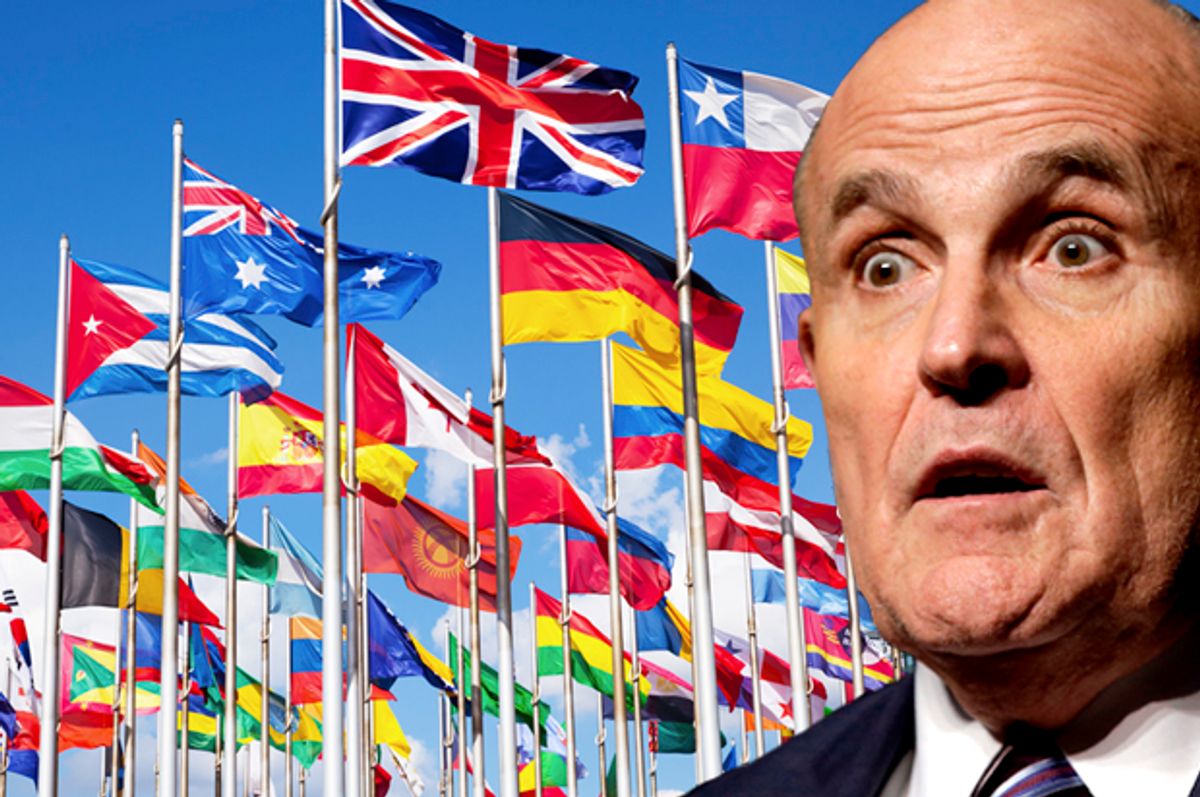 The two most prominent names Republicans are floating as possible choices for secretary of state in the Trump administration — yes, it is still hard to type those words — are those of John Bolton and Rudy Giuliani. It is impossible to overstate just what a disaster for American foreign policy it would be for either of these men to serve as the nation’s top diplomat: Bolton because he is an ultra-hawk who never met a war he didn’t want to start and Giuliani because he is a thin-skinned rage goblin who thinks being mayor of New York on Sept. 11 qualifies as foreign policy experience.

But there is an added dimension to Giuliani’s candidacy that has been reported extensively this week but worth repeating over and over, for the next four years if necessary. And that is that Giuliani has taken millions and millions of dollars to shill for foreign governments and clients with businesses in the United States, companies that he would now have a hand in negotiating with and, in some cases, awarding lucrative contracts to on behalf of the American government.

If Trump really intends to drain the swamp, he probably shouldn’t put one of the swamp’s most prominent alligators in one of his top Cabinet positions.

As has been reported around the web this week, the man once called :America’s mayor" has had a lucrative post-mayoral career as a lobbyist and consultant. For a few years he ran his own consulting firm, Giuliani Partners. In addition to helping other clients, Giuliani Partners for a time in 2007 advised TransCanada on the company’s proposal to store liquefied natural gas in a 1,200-foot barge on Long Island Sound.

You may remember TransCanada. It is the energy company that long wanted to build the Keystone XL pipeline down the center of the continental United States. After receiving enormous pushback from the public and perhaps noticing that TransCanada’s pipelines have a nasty habit of leaking their products into the environment, the Obama administration finally killed the project a year ago. But the company has been making noise about trying to get it approved by the next administration. And as secretary of state, Giuliani would be the government official who gives the final OK.

His past involvement with TransCanada is just one of the many potential conflicts of interest between Giuliani’s private business dealings and some of the decisions he would face as secretary of state.

But there is another angle — the ridiculous hypocrisy that Giuliani showed in his attack on Democrat Hillary Clinton and her family’s Clinton Foundation that he repeated throughout the recent presidential campaign.

Giuliani’s attacks centered on the foundation's acceptance of donations from Qatar, a nation with a poor human rights record. But America’s mayor has also taken money from Qatar — and for his own personal enrichment, not a charitable foundation.

Giuliani’s ties to Qatar came to light when he sought the Republican presidential nomination in 2008. A subsidiary of Giuliani Partners, known as Giuliani Security and Safety, had advised Qatar’s state-owned oil company about security at a natural-gas plant. The Qatari government may have a less-than-stellar human rights record, but in the world of international business it is the type of client that one would expect that a security firm founded by an amoral politician trying to cash in on his name would take on.

But during the campaign, Giuliani sucked up a great deal of airtime, mostly on Fox News, attacking the Clinton Foundation for accepting “hundreds of millions” of dollars in donations from Middle Eastern countries, including Qatar. Furthermore, he insinuated that the donations were a “pay for play” scheme and that the Clintons lined their own pockets with the money while Hillary Clinton as secretary of state granted those countries special favors with the State Department. He even suggested there was enough evidence to charge the foundation with racketeering under the nation’s Racketeer Influenced and Corrupt Organizations Act laws.

Of course, Giuliani was lying. The amount of donations was nowhere near “hundreds of millions” of dollars. Qatar itself gave somewhere between $1 million to $5 million, but there is no evidence that either of the Clintons pocketed this money or that the State Department granted the Qatari government any favors in return. Despite all the accusations, Qatar’s money seems to have gone exactly where the Clintons claimed — into the foundation and then out to one of the projects it funds around the world.

If Hillary Clinton had won last week’s election, you can be sure Giuliani would have continued his false attacks via the airwaves of any network that would book him. But Trump’s win and Giuliani's  possible ascension to the job of America’s top diplomat means that suddenly America’s mayor will have all sorts of cheap justifications ready to go for his confirmation hearings explaining why he is not a hypocrite of the highest order.

On the positive side, at least a few Republicans seem to be unwilling to give Giuliani the benefit of the doubt. That will likely change later on, but for the moment liberals are going to have to look to all sorts of unexpected allies to hold the line on Trump staffing his administration with D list intellects and sociopaths.