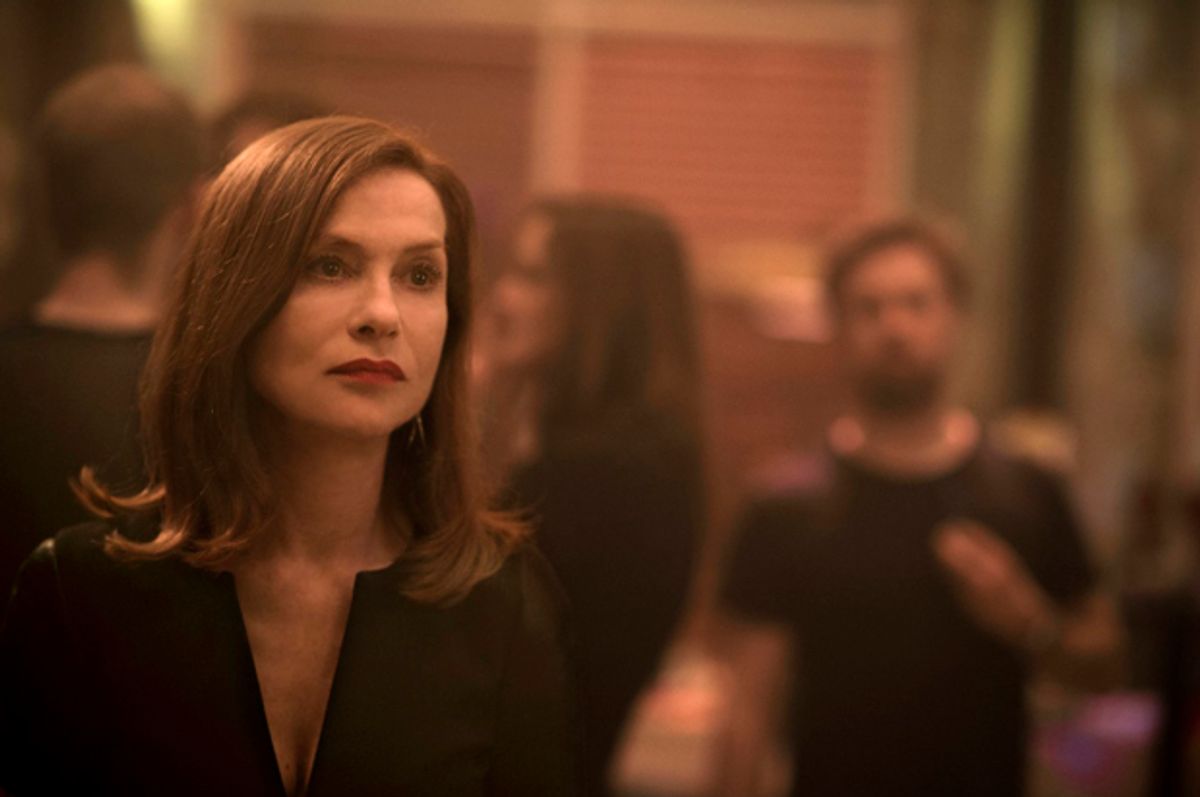 Even if you’re not the type of person who likes movies you have to read, you’re likely to hear a lot about “Elle.”

The latest provocation from the professionally audacious Paul Verhoeven continues the Dutch director’s obsession with sex and power and the humans who find themselves caught in the middle. The film opens with the matter-of-factly brutal assault of Michèle (the great Isabelle Huppert), a video game designer who is raped by a masked intruder in her apartment.

“Elle,” like all of Verhoeven's films, refuses easy categorization. It combines elements of a rape revenge thriller, an extremely dark class comedy and Cronenbergian body horror to create something totally unique — a singular experience that transcends genre.

A lot has already been said about how the film handles sexual assault, and these subjects will continue to be vigorously debated. Like many of Verhoeven’s films, “Elle” isn’t much interested in political correctness or even articulating a coherent message about sexual assault.

What Verhoeven is interested in is subversion. “Elle” may be the greatest movie ever made to open on an animal-reaction shot: The rape, shown in the film’s first minutes, is filmed from the perspective of Michèle’s cat that stares blankly ahead, unable to process what it's is seeing. Its empty gaze is comic until the audience sees what the cat's watching. Michèle, who declines to get the police involved, later scolds her feline for being a bystander. It’s a film that constantly upends your expectations of what it should be.

Although Verhoeven frequently makes movies about sex, intercourse has never been less erotic than how it is depicted here. Michèle is having an affair with her best friend’s husband (Christian Berkel) — and also, after she discovers his identity, her attacker — but the most sensual exchange in the film is one shared with her seemingly platonic companion, Anna (Anne Consigny). Snuggled closely in bed, the two women discuss a thwarted hookup from years past. They attempted to have sex but couldn’t stop laughing. There’s a look in Anna’s eyes that suggests a lingering hunger for more, a desire she may not yet be ready to express.

Sexual fluidity is often depicted in Verhoeven’s films, as the director is himself bisexual, although your opinion on how effectively he deals with human sexuality may differ depending on how much you like his movies. It’s easier to forgive the faults of a filmmaker we admire than one we despise.

“Basic Instinct,” still Verhoeven’s most financially successful effort to date, was protested by LGBT activists when the movie debuted in 1992. Starring Michael Douglas and Sharon Stone, the film is about a detective, Nick Curran (Douglas), who falls for the wrong woman. The femme fatale in question is Catherine Tramell (Stone), a bisexual crime novelist who uses her love life as fuel for her writing. The problem is that her real-life subjects have a habit of dying.

Verhoeven has called the film a “spiritual sequel” to “The Fourth Man,” the 1983 supernatural chiller that was the director’s last film in the Netherlands before moving onto Hollywood. The plots are more than a bit similar. An aging writer, Gerard Reve (Jeroen Krabbé, a dead ringer for Rupert Everett), spies a handsome man (Thom Hoffman) in an Amsterdam train station and lusts after him with an intensity that’s comically absurd. The young stud gets away from him, boarding a train to Cologne, but they meet again through a series of eerie coincidences.

Gerard instead begins bedding Christine (Renee Soutendijk), an elegantly lonely widow who films one of his lectures. Christine is the type of woman who grieves in spotless makeup, accompanied by an endless series of red flowing nightgowns. The handsome man, whose name is Herman, just so happens to be the woman’s other lover. Gerard schemes his way into an introduction, but there’s a catch: He may not survive to be reunited with his crush. Christine is a black widow type — with not one but three dead husbands, who all died under mysterious circumstances. Gerard comes to believe that she’s a witch and that he will be her next victim.

And Gerard arrives at this conclusion through a series of hallucinations that the viewer is not meant to take seriously, even though the he believes them to be premonitions. Although one could read “The Fourth Man” as misogynistic, the film is more likely a critique of misogyny, as well as the dangers of sexual obsession.

In discussing Nicholas Ray’s “In a Lonely Place,” Karina Longworth, the film critic for the Village Voice, argued that this Humphrey Bogart vehicle is “about a man’s fundamental fear of a woman, or maybe more precisely, what that woman could turn the man into.” After Dixon Steele (Bogart) is accused of murdering a young woman, he becomes increasingly abusive toward his girlfriend — who begins to see him not as a murderer but as weak and pathetic. Throughout “The Fourth Man,” the audience sees Gerard not as vindicated in his outlandish beliefs but potentially insane.

The crucial shift in “Basic Instinct,” and why so many people take issue with it, is that it is not the protagonist who is bisexual. It’s the villain.

In “The Fourth Man,” Verhoeven uses a litany of castration imagery to convey a man’s fear of emasculation at the hands of a powerful, sexually ambiguous female. Christine, who is so androgynous that Gerard comments that she looks like a boy with her breasts covered, appears to be holding scissors in every scene. While Catherine uses an ice pick to dispose of her prey — a literal phallus — it’s her confident, unabashed sexuality that’s the real weapon. In the film’s most famous sequence, Catherine is interrogated without underwear, flashing her bare private parts as a display of dominance.

When it comes to bisexual representation, “Basic Instinct” isn’t exactly woke. As an extended homage to Alfred Hitchcock’s “Vertigo,” the film dabbles in the worst aspects of the British auteur’s work. In Hitchcock’s “Rope,” the true evil is homosexuality. Based on the Leopold and Loeb killings, two gay college students with an übermensch complex (John Dall and Farley Granger) have a dinner party on top of their recent murder victim, who is concealed in a chest below. The act is intended as a display of their innate superiority.

In “Strangers on a Train,” two men — who have a passing encounter on a locomotive — trade murders as a stand in for sexual intercourse. In each of these movies, homosexual subtext becomes synonymous with villainy.

There are three bisexual characters in “Basic Instinct,” all of whom are shown to be unstable or driven to homicidal impulses. Catherine, like the villains in “Rope,” kills because she thinks she can get away with it. Roxy (Leilani Sarelle), her live-in girlfriend, attempts to run over Nick with a car. Given little dialogue, the character is reduced to a jealous lover without agency or true motivation — that is, aside from deadly lust. Then there’s Beth Garner (Jeanne Tripplehorn), the police psychologist who may or may not have pulled a “Single White Female” on Catherine after the two had an affair in college, changing her hairstyle to match her lover’s blonde bob.

It’s easy to see why “Basic Instinct” was picketed by LGBT activists, who even gave away the ending to keep audiences out of the theater. It begs to be protested.

Yet the film offers a sly subversion of its own. If you believe that Nick is the hero of the film, the movie is risible. But Verhoeven and his screenwriter, Joe Eszterhas, went out of their way to show that the detective is a truly despicable human being. “Basic Instinct” suggests that both Catherine and Nick have a taste for murder, but she’s at least aware and in control of her impulses. Prior to the film’s action, he has gunned down two tourists while high on cocaine, one of many accidental killings for which he is responsible.

Catherine, who calls him “Shooter,” confronts his claim that he was haunted by the tragedy. That’s bullshit. Nick murdered people — and he liked it. “Nicky got too close to the flame,” she taunts him.

Many movies boil down to a central question: Will the protagonist get what he or she wants? Catherine certainly does. She continually outsmarts the men around her and is  two steps ahead at every possible moment. The male detectives investigating her speak in an exaggerated braggadocio to broadcast their masculinity, but Catherine reveals that to be a farce. The character is so ruthlessly intelligent that Douglas reportedly struggled with that dynamic during filming. He claimed that Nick was “too passive,” but what he really meant was that his character is just another weak man unmasked for what he is — not how he wants to be seen. Nick isn’t even the hero of his own story.

In “Basic Instinct,” bisexuality is a weapon, a plot device and an arena for titillating spectacle — but sexual fluidity doesn’t quite add up to fulfillment on its own terms.

“Showgirls,” Verhoeven’s second collaboration with Eszterhas, shares the same issues. The 1994 box office bomb treats the sexual tension between rival burlesque dancers on the Las Vegas strip as little more than erotic kitsch, never realistically suggesting that Nomi Malone (Elizabeth Berkley) could end up with Cristal Connors (Gina Gershon). The word “bisexual” is never uttered on screen because the film is more interested in power and control than sexual orientation as a fixed identity. Like Catherine Tramell before her, Cristal wants to go to bed with Nomi so she can destroy her. It’s not murder, but it’s not far from it.

If Verhoeven’s films rarely name their characters as bisexual, that could be read as both a positive and negative development. It gives his characters a certain freedom to act on their base impulses of human desire, which often go outside the box of easy categorization, but also shortchanges their inner lives. What makes “Elle,” for instance, a step forward in the director’s complicated and often conflicting view of bisexuality is that it’s the first time Verhoeven has suggested that happiness is a possibility for his fluid characters.

Given everything that’s come before, the surprisingly optimistic conclusion of “Elle” might seem jarring to viewers. After the death of her parents, Michèle visits a graveyard in their memory. Her father was a serial killer and her mother was an aging lush with a taste for plastic surgery and male prostitutes, so “mourning” perhaps isn’t exactly what she's doing.

Michèle meets Anna, who has recently discovered that her husband and best friend were having an affair, and who appears to have fallen out of touch with Michèle. The two women quickly mend fences, wondering what they could have ever seen in the sexual partner they both briefly shared.

Something unusual — and ambiguous — takes place in these moments. The two women, who share a lifetime of unrequited longing, walk off into the distance together arm in arm. It’s not the rapturous passion of “Basic Instinct,” in which the bedding of Catherine is referred to as “the fuck of the century,” or even the sticky pink lip gloss kisses of “Showgirls.” The film’s view of true intimacy is quieter and more revelatory.

Many female critics have read the film as an overt critique of patriarchy — represented by the many men who have let Michèle down. There’s her dim-witted son (Jonas Bloquet), a trust-fund adult who lives off his mother’s generosity; the ex-husband who is dating a younger woman (Charles Berling); her murderous father; and then her abuser. Following all these disappointments, Michèle does what she always has — goes on living her life, more or less the same way she had before. But this time, “Elle” suggests, she might finally be open to allowing the passion she denied herself so long ago — in which sex isn’t about domination. It’s actually satisfying.