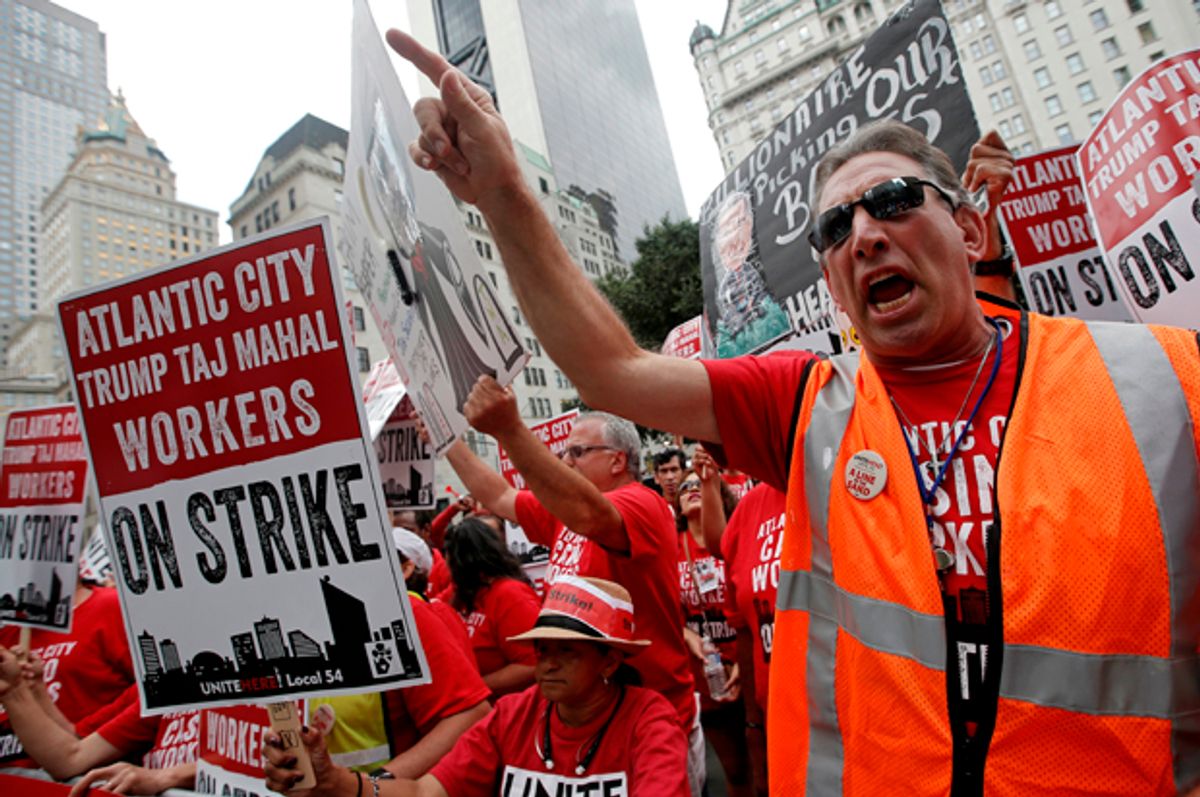 Hillary Clinton's loss in Rust Belt states that Barack Obama won handily — like Wisconsin, Michigan and Pennsylvania — has resulted in widespread hand-wringing about why Democrats struggle to capture the votes of the white working class. There's a lot of discourse about the need of coastal professionals to reach out more, emphasize more, "feel their pain."

This will supposedly lure back voters who started breaking off from the Democrats decades ago to vote for candidates who offered race-baiting or — as in the case of Donald Trump — openly racist rhetoric rather than economic solutions.

What is being talked about much less, however, is the role played by labor unions in protecting workers' rights, and in the American economy more broadly. In a widely shared article in the Harvard Business Review, "What So Many People Don’t Get About the U.S. Working Class" by Joan C. Williams, the word "union" appears only once, and the context is negative.

This oversight is particularly troubling when one considers that Republicans certainly don't think unions are a minor issue. On the contrary, Republicans see labor organizing as a major impediment to their electoral prospects. So they have done everything in their power to dismantle the ability of unions to organize workers and bargain collectively on their behalf. Now that Trump will have the power to appoint federal judges, especially Supreme Court judges, these efforts to destroy organized labor will get a big assist in the courts.

“One of the reasons that Republicans [in Wisconsin] were trying to gut collective bargaining rights for public sector unions" was that they wanted "to defeat Obama in 2012," explained Joseph Slater, a law professor at the University of Toledo in Ohio who specializes in labor law.

While the effort to constrain or destroy labor unions in Wisconsin didn't lead to Obama's defeat then, "it may have well have helped defeat Clinton in 2016,” Slater added in a phone interview.

Considering how narrow Trump's general election victory was in that state — Politico currently has his lead as smaller than 30,000 votes — it's safe to bet that the decline of union power in that state was a major factor. But conservative forces have even bigger designs on public unions — plans that they will almost certainly be able to bring before the Supreme Court. That prospect should terrify the labor movement and its supporters because filling the seat left vacant by former justice Antonin Scalia with a conservative judge will likely result in a majority hostile to labor unions.

“Justice [Anthony] Kennedy is not going to be the savior of the organized labor movement before the Supreme Court," Charlotte Garden, a labor expert and associate professor at the Seattle University School of Law, said over the phone.

“Kennedy has been quite hostile to organized labor," she said. "In fact, in some of the major union cases that have been in front of the Supreme Court in recent years, it was Justice Scalia that was in the unusual role of being the potential swing justice.”

In January, when Scalia was still alive, the Supreme Court heard arguments in the Friedrichs v. California Teachers Association case, which challenged the practice of "agency fees," whereby unions charge all the workers they represent in a given industry, whether individual employees want to join the union or not. When unions bargain for higher wages and better benefits, that helps all the workers not just the union employees. By charging this fee, unions are able to avoid the "free rider" problem, by which workers benefit from labor organizing without participating in it.

“The analogy I always use is that I like my cable provider fine — good selection of channels, not too expensive," Slater explained. "But if they were legally obliged to provide me cable service without me paying them anything, I might not pay them anything.”

In 1977, in the Abood v. Detroit Board of Education case, the court upheld the practice of agency fees for public sector unions. It seemed like settled law, but for this case, the plaintiff argued that such agency fees violate the First Amendment because people paying for them are subsidizing forms of speech — such an union organizing and pamphleteering — that they may disagree with.

Scalia died before the court could render a verdict, and the court split 4 to 4, which means that agency fees practice continues. It's likely, however, that this case or one similar to it will be heard in the next year or so.

It's widely assumed that President Obama's pick to fill Scalia's seat, Merrick Garland, would have sided with the union. It's also safe to guess that whomever Trump puts in that seat will take a different view. If the high court rules against agency fees, it will be devastating for the financial health of public sector unions, crippling their ability to fund the level of representation needed to protect workers.

To make it worse, Slater argued, there's a chance that conservative justices on the court, especially Justice Samuel Alito, are eyeing opportunities to rule that agency fees are unconstitutional — not just in public sector unions but in all unions.

In the 2014 case Harris v. Quinn, which centered on agency fees for a home health care workers union, Justice Alito wrote a digressive passage in which, according to Slater, he hinted that he believed "union security clauses in the private sector create a constitutional issue." Slater is worried that there's a substantial chance that, with a new Trump appointee on the bench, anti-labor forces will seek an opportunity to make it illegal for any union anywhere to negotiate for agency fees from workers it represents.

While this agency fee debate is the biggest one facing labor in the courts right now, Garden outlined a number of other issues of major concern.

Another big one is compulsory arbitration agreements. Beginning in 2012, the National Labor Relations Board began taking the position that agreements requiring workers to pursue any and all legal claims against their employers in individual arbitration — rather than through a union process — were violations of labor law, Garden explained. Existing law "protects workers’ rights to try to remedy those grievances on a collective basis,” she said.

Garden expects that some business owner  will be able to go before of the Supreme Court soon to argue for his or her right to force employees into individual arbitration, rather than allowing unions to handle such disputes. As with the agency fee issue, odds are high that the four current conservatives on the bench, plus a new Trump appointee, will side against worker rights to union representation in these cases.

“I think we’ve seen, in this election, the effects the weakened labor movement can have on electoral outcomes," Garden added. “The decline of good jobs in the Rust Belt and the decline of unions have gone hand in hand.”

That's the vicious cycle that Republicans have set up and one we have every reason to believe that Trump — who has tried to squelch union organizing at his Las Vegas hotel — will continue. They generally have undermined and weakened union and labor standards, which negatively affects the ability of Democrats to organize workers. That lowers Democratic turnout at the polls, which helps elect Republicans, who in turn continue to attack labor organizers and erode workplace rights.

And while it's fun to focus on personality and cultural issues and blame those things for low voter turnout in the Rust Belt states, these Republican actions strongly suggest that GOP strategists believe the decline of organized labor is to blame. From their point of view, it's the gift that keeps on giving.

Editor's note: This story has been updated. An earlier version of this article had inaccurately suggested there may be serious court challenges to state and local minimum wage laws.