Giving in to Donald Trump: Democrats aren't going on the attack to fight for their political futures 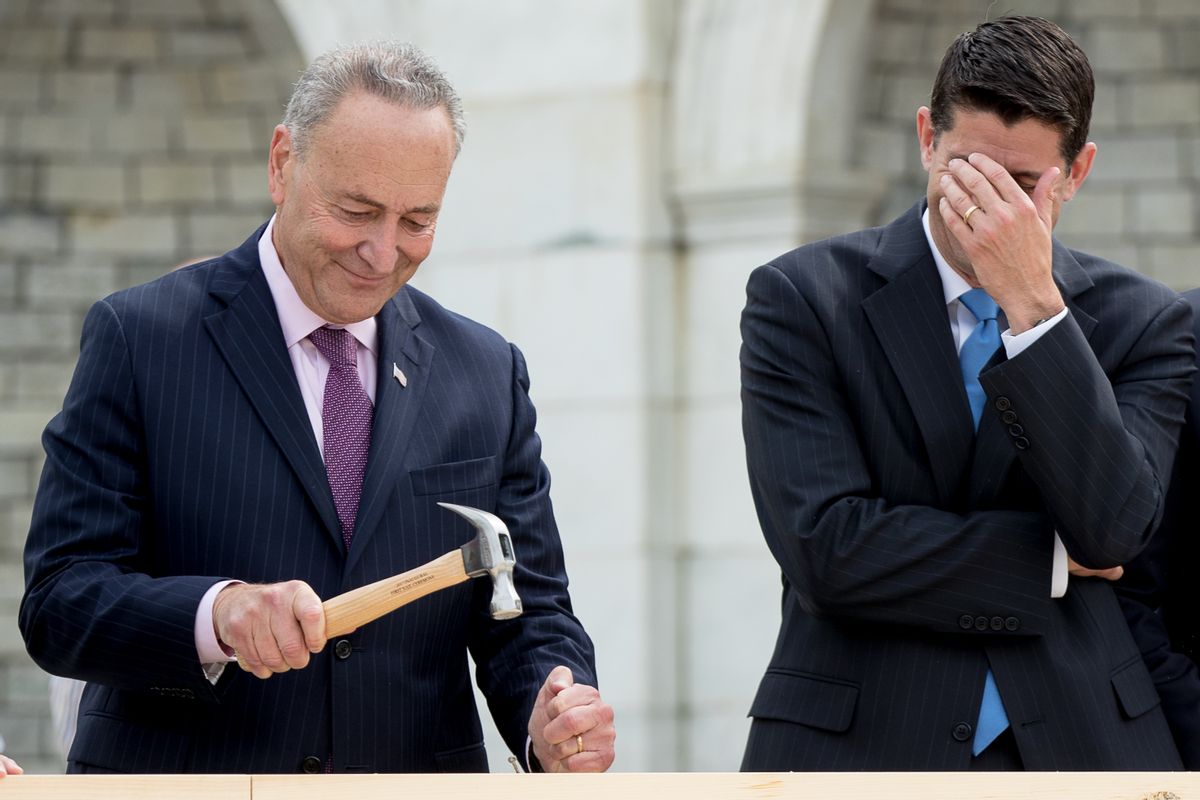 House Speaker Paul Ryan of Wis., right, hides his face and laughs at Sen. Charles Schumer, D-N.Y., bends his nail during a ceremony to drive in the first nails to signifying the start of construction on the 2017 presidential inaugural platform, Wednesday, Sept. 21, 2016, on Capitol Hill in Washington. (AP Photo/Andrew Harnik) (AP)
--

The Huffington Post’s Sam Stein wrote a great examination of why Democrat Hillary Clinton lost the “blue wall” states of Michigan and Wisconsin on her way to losing the presidency to Republican Donald Trump. It was a broad-spectrum failure involving several unique forms of incompetence, but one of the key elements was too-clever-by-half political strategizing that assumed the Republicans would behave in ways that were detrimental to their political interests.

The Clinton campaign flopped “because of psychological games they were playing with the Trump campaign,” Stein wrote. “They recognized that Michigan, for example, was a vulnerable state and felt that if they could keep Trump away — by acting overly confident about their chances — they would win it by a small margin and with a marginal resource allocation.”

The campaign didn’t realize until too late that this overwrought game of multidimensional chess (acting against one's own interests in an effort to dupe an opponent into sabotaging himself) played right into Trump’s hands.

Now that Trump has won, it looks like the Democrats in Congress are getting ready to make this same fraught strategic gamble. The New York Times reported on Thursday that Senate Democrats, led by Chuck Schumer, are weighing a conciliatory posture toward the incoming president and searching out common ground on issues like infrastructure and childcare policy.

“Democrats are looking for ways they can work with Mr. Trump and force Republican leaders to choose between their new president and their small-government, free-market principles,” the Times reported. The ostensible goal behind this is to chase down and win back the white working-class voters who abandoned the Democrats in states like Michigan and Wisconsin.

So let’s take a big step back and survey the broader political landscape as it now exists. The incoming Republican president is a wildly polarizing, highly unpopular, scandal-plagued, race-baiting, incompetent, corrupt, wannabe strongman who lost the popular vote by a huge margin. He successfully postured as a “populist” despite espousing a policy agenda that is determinedly hostile toward the working class.

His transition team is being larded up with insiders and cronies, his election is being openly celebrated by Wall Street bankers, he’s already flipping on his promises to protect the safety net, and his advisors are going on TV to cite Japanese internment as a positive precedent for his draconian national security agenda.

Faced with all of this, Schumer and his buddies are communicating to the public, the young people who are out in the streets protesting this election and the party’s base of minorities and women who were the targets of Trump’s attacks that they can work with this guy.

What this reminds me of is the bad old days between 9/11 and the start of the Iraq War, when rudderless and politically beset Democrats were reeling from the “tough on terror” political bludgeoning being doled out by the Republicans. The Democrats found ways to accommodate the George W. Bush administration, reasoning that it was safer politically to align themselves with members of the GOP on national security and fight them elsewhere. The results were disastrous, and the Democrats who went along with “War on Terror” fearmongering (like John Kerry and Hillary Clinton) paid steep political costs.

Looking at the situation today, I’m not entirely sure what motivation the Democrats have to even feign accommodation of Donald Trump. Sure, he might be closer to where the Democrats are on a few key issues, but why should anyone put any faith in Trump's word, let alone his (nonexistent) understanding of public policy?

Why extend an olive branch to a president-elect who ran the ugliest, most racially divisive and most xenophobic campaign in recent history? The Republicans have sole ownership of Donald Trump right now. They’ve given themselves over to his brand of ethno-nationalist politics and all its attendant toxicity. Let them have it.

By even pretending to want to work with Trump on his “populist” issues, Democrats are giving undue credence to the notion that Trump is actually a populist. Instead of finding ways to help legitimize the president-elect's ill-gotten political identity, the party would be better served by raising an unholy ruckus over the many, many parts of the Trump platform that explicitly benefit the wealthy and punish the working class.

His infrastructure plan is a hot mess, his financial deregulation proposals are a gift to Wall Street, his child care policy deliberately excludes the low-income people who need the most help, and both Medicaid and Medicare (which Trump promised were sacrosanct on the campaign trail) are now under threat. The strategy here should be four words: Attack, attack, attack, attack.

But we’re not hearing enough of this from the leaders of what is supposed to be the opposition. Democrats said during the campaign that Trump would be a disaster for the country as president, and they were right. It’s a damn shame not enough people in the Rust Belt agreed, but that’s no reason for Democrats to start looking for ways to help make the false promise of Trumpism a reality.

Whatever Rube Goldbergian political strategy Schumer and his aides may be cooking up to drive a wedge between Trump and the GOP probably seems plausible and satisfying in theory, but they should know by now that these overly elaborate schemes have a propensity to backfire. The Democrats would be better served by putting up a highly visible fight and mounting a relentless campaign to expose the new president as the fraud he is.