They won the battle, but the war's not over — and in their hearts they know they've surrendered to ugliness 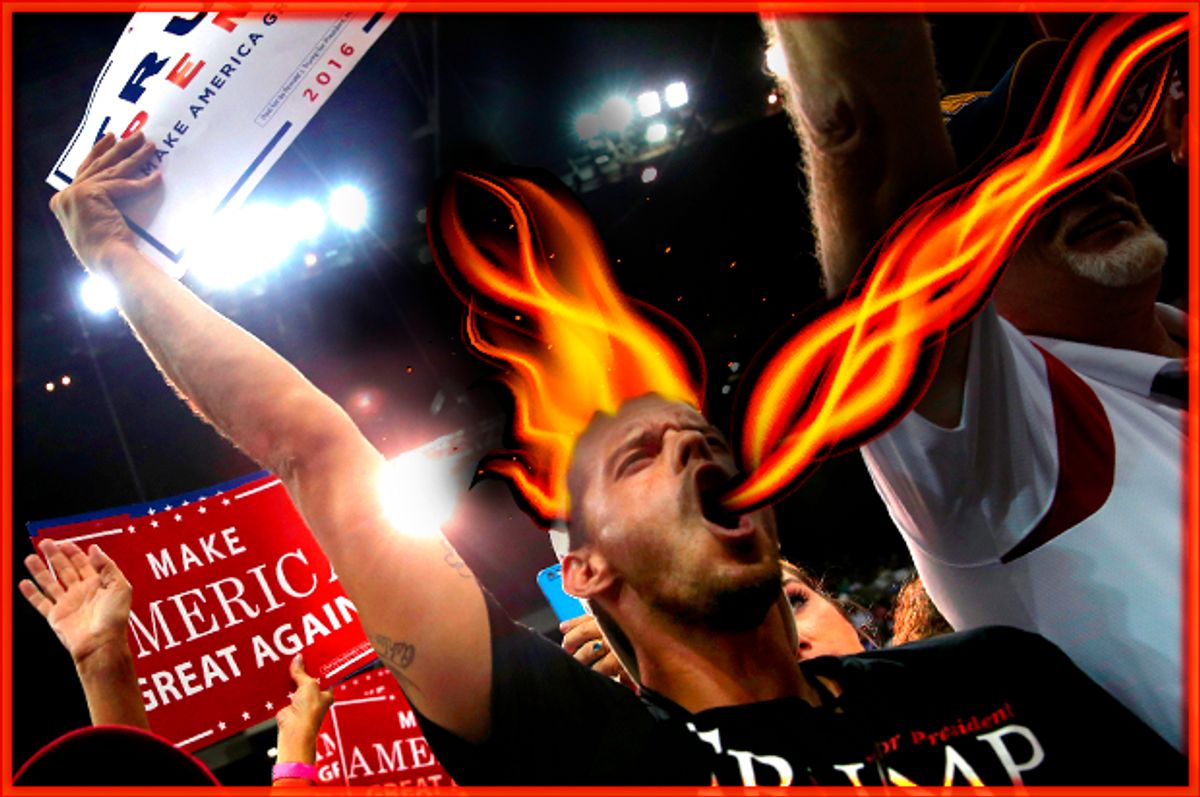 It's not surprising that the election of Donald Trump would cause an upheaval in civil society. The differences between the two visions of America that were presented in this campaign couldn't be more stark, and it's inevitable that they would play out beyond the political system.

Much of the unrest on the left has taken the form of protest marches and school walkouts, while the right is more inclined to drunken hooliganism, flying the Confederate flag and the like. This is America. We have free speech and a right to assemble, and regardless of how we feel about the "message" being sent by people on the other side, they have a right to say it.

But there also have been many reports of anonymous defacing of property with white power slogans and other racist, xenophobic and anti-Semitic phrases. And there are now hundreds of stories of individual acts of bullying and even hate crimes coming from people who call themselves Trump supporters, aimed at fellow Americans they see as their enemies.

We could see this in the Trump rallies, of course. They bristled with resentment and barely repressed violence. And no one can possibly argue that the candidate didn't use those dark emotions to motivate his followers. In a "60 Minutes" interview with Lesley Stahl, Trump admitted that he did that consciously. When Stahl pointed out that people are scared, Trump had to be coaxed to say this:

Has any president-elect ever been asked to reassure the American people that they needn't be afraid of him and his followers? It's astonishing. Trump's lack of understanding about why they are afraid is even more so. He seems to think people are soothed by his saying "don't be afraid" — followed by "we're going bring our country back," as if that were a threat.

And that's exactly what scares them. It's clear he wants to go back to a time when women, people of color, immigrants and those with minority religions were second-class citizens. They are terrified of what Trump has promised to do to deliver that lost world back to a swath of America that seems to hate them.

Trump outfoxed the system and won the whole thing without even getting a majority. He heads an undivided government and has the chance to leave a mark on the country for generations with at least one appointment to the Supreme Court. He has the power to enact his entire agenda with very little institutional resistance. And yet his followers are still filled with outrage and frustration, lashing out at the reeling and defeated left.

An incident in Brooklyn this past weekend illustrates the phenomenon. Two women in a restaurant were bemoaning the election of Donald Trump when a man and his wife sat down next to them and became incensed about what the two women were saying. The manager moved the couple to a different table and gave a meal without charge to calm the two down. But after leaving the restaurant the man stormed back in and punched one of the women in the face. He told the manager he wanted to kill her. (Fortunately, the woman was not seriously injured.)

This is just one random incident but it raises the question: Who gets that mad after winning? It's not as if the two women were rubbing the man's nose in defeat. Why would something so ordinary as complaining about the election cause a man to hit a stranger (a woman) in the face?

In fact, America has been divided along two moving tribal lines for a very long time, and this odd reaction has happened before when this political faction has come to power, although it doesn't normally get this violent or ugly. The political right often seems to take little joy in its victories, instead remaining focused on its defeated enemies. Compromise is unacceptable: Right-wingers seem to demand total capitulation and when their adversaries continue to resist, they are enraged.

The best description of this phenomenon comes from Abraham Lincoln in his famous address at New York's Cooper Union in 1860. Trying to explain how impossible it was to deal with the Southern slave states using normal democratic means, he asked, "What will it take to satisfy them?"

This, and this only: cease to call slavery wrong, and join them in calling it right. And this must be done thoroughly — done in acts as well as in words. Silence will not be tolerated — we must place ourselves avowedly with them. Senator Douglas' new sedition law must be enacted and enforced, suppressing all declarations that slavery is wrong, whether made in politics, in presses, in pulpits, or in private. We must arrest and return their fugitive slaves with greedy pleasure. We must pull down our Free State constitutions. The whole atmosphere must be disinfected from all taint of opposition to slavery, before they will cease to believe that all their troubles proceed from us.

This is why the right-wingers are so angry. It's not enough for them to win. Those who opposed Trump must stop opposing him. We must agree that Muslims should be banned from entering the country, agree we should torture and kill suspected terrorists and their families, agree immigrants should be rounded up and deported, agree there should be guns in schools, agree women should be punished for having abortions and agree to all the rest of it. Until we stop resisting completely and declare that we are "avowedly with them," they will continue to believe that "all their troubles proceed from us."
That is not going to happen. Trump's forces may have won the election but they have not won the hearts and minds of the American people who didn't vote for him. And they won't. This administration will be met with fierce resistance from millions of people, from the moment Trump takes office until the day he leaves. There will be no appeasing him, and no easing of his followers' guilt for what many of them know in their hearts to be ugly and cruel impulses in consenting to this white nationalist program. It's all on them.
Lincoln had this to say to his fellow Unionists about how to proceed in a situation such as this:

Neither let us be slandered from our duty by false accusations against us, nor frightened from it by menaces of destruction to the Government nor of dungeons to ourselves. Let us have faith that right makes might, and in that faith, let us, to the end, dare to do our duty as we understand it.

What else can we do?