The danger of Tinder’s LGBT-friendly upgrade: How the dating app could be used to target trans users 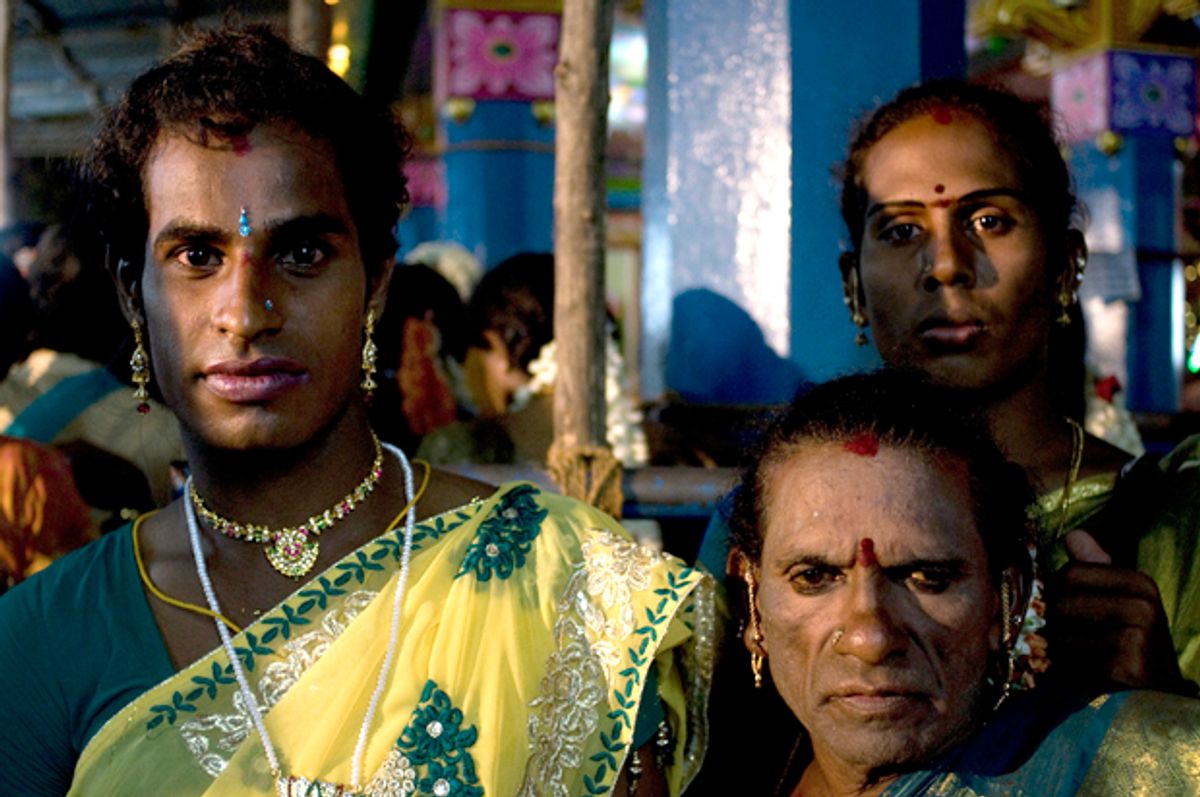 Tinder took a great leap toward inclusion on Tuesday by announcing that it would be rolling out expanded gender options for users. Following similar moves by Facebook and OkCupid, the popular dating app will allow transgender and gender nonconforming people to identify beyond the binary choices of “male” and “female.” By selecting the “More” option, users can choose between 40 identities, including “non-binary,” “transgender woman,” “transgender man,” “transmasculine,” “agender,” “two-spirit” and “other.”

The trans-friendly upgrade was hailed as a groundbreaking moment for Tinder, a company that has struggled with preventing harassment on its platform. Many transgender people have been historically banned from the app, which asks users to report any “inappropriate behavior.” That self-policing, intended to filter out spambots and catfishers, allowed users to file complaints en masse about trans people — even though they weren’t doing anything wrong. Because it can be difficult to separate valid complaints from outright trolling, trans Tinder users frequently found themselves blocked due to false reporting.

Tinder worked with GLAAD’s Nick Adams, trans activist Andrea James and the creative team of “Transparent” to ensure that the solution met the evolving needs of the extremely diverse trans community. It was important to recognize that in a rapidly changing America, trans folks are looking for love, too. “Gender categories are expanding,” Zackary Drucker, a producer on the acclaimed Amazon show, told The New York Times. “We are a part of the world, and we date.”

The trouble with Tinder, though, is precisely the thing that separates it from social-media platforms like Facebook and OkCupid: The app uses geolocation software to match up users with other singles in their area. That’s good if you’re looking for a hot date in your city on a Friday night but potentially bad for the trans community, which faces the highest hate crime and murder rates in the country. If users are able to pinpoint the location of transgender people in their neighborhood, they could exploit that same technology to target them for violence.

For those unfamiliar, Tinder works by matching users with other people who live in their general vicinity. Users are presented with the profiles of potential mates and can swipe right on the touch screen if they would like to chat with prospects further, a conversation that takes place directly on their mobile device. They swipe left if they’re not interested.

On those same profiles, it indicates how far away “Gina—29” or “Stacy—42” lives. If you live in Manhattan, for instance, the fact that these eligible women live “20 miles away” may be a deterrent from making a connection. That’s basically a long-distance relationship, especially if someone lives in Staten Island.

This might seem like helpful information, but it isn’t always. In 2013, hackers discovered a flaw in Tinder’s geolocation software that allowed users to pinpoint the exact coordinates — down to the precise longitude and latitude — of others on the platform. To prove how simple it was to make the app into a digital bounty hunter, Include Security, a New York-based consulting company, built its own app, called TinderFinder, which allowed it to track down someone’s whereabouts on the service.

That loophole was reportedly fixed, but stalking tends to be a feature of geolocation services not a bug. Take this 2015 report from Ars Technica about Grindr, the hookup app used by 6 million men around the world: “The programming interface that makes [location] information available can be hacked by sending Grindr rapid queries that falsely supply different locations of the requesting user. By using three separate fictitious locations, an attacker can map the other users' precise location using the mathematical process known as trilateration.” Because location sharing is a “core function” of the app, the only way to protect yourself is by disabling that feature altogether.

That vulnerability has allowed government officials and private citizens to harass, assault and even imprison gay men using Grindr. An armed gang in London used the app to identify victims to rob at gunpoint. Although homosexuality isn’t illegal in Egypt, the country’s police force has reportedly prosecuted gay men under its draconian “debauchery laws” after reaching out to them on the platform. Similar actions in countries like Russia, Nigeria and Saudi Arabia led Grindr to post a disclaimer in nations with anti-gay laws that police may be posing as gay in order to entrap them.

In its recent note to users, Tinder said that it is “learning to be a better ally” to LGBT people. If it wishes to do so, the company should take note of how its software has the ability to harm a population that’s already at a disproportionate risk for violence. In June The New York Times reported that members of the LGBT community are more likely than any other group to be the victims of a bias attack. Gay, lesbian, bisexual and transgender people are twice as likely as African-Americans to be targeted for a hate crime.

Trans folks, however, remain the most vulnerable segment of the LGBT community, despite their extremely small numbers. In 2015 21 transgender people were killed, most of whom were women of color. This year the tally has already topped that. With two months left in the year, 26 victims have already lost their lives, the largest such total since advocates began tracking anti-trans violence. In August Rae’Lynn Thomas, 28, was murdered by her mother’s ex-boyfriend, shot during a violent altercation. In September the body of Lexxi T. Sironen, a 43-year-old woman who lived in Waterville, Maine, was found after she was dumped in a reservoir.

There are a number of ways that Tinder can help protect its trans users from potential danger. Instead of making location sharing compulsory, the app should set privacy as the default. If users wish to share that information, they can opt in.

The same goes for its increased gender options. While the app's recognizing users’ identities might make them feel welcome, they should have the ability to not post such details publicly. While trans people still have the right to choose the binary male and female gender options, disclosing may put them at risk for being flagged all over again — which is exactly what got Tinder into this mess to begin with. Users shouldn’t have to choose between their safety and their participation.

Tinder should be applauded for listening to the concerns of the trans community and working to bring dating into the 21st century. Unfortunately, it seems like the company still has some work left to do in order to ensure its update doesn’t unintentionally make the problem worse.