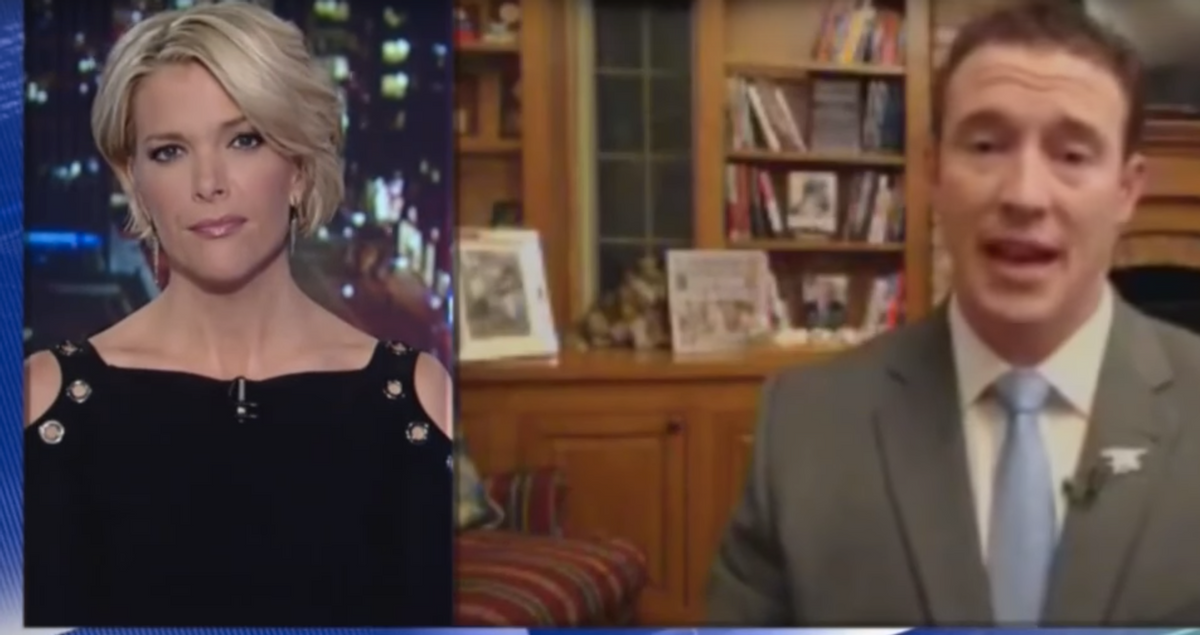 During World War II, President Franklin Roosevelt imprisoned about 120,000 Japanese-Americans without due process. This dark episode is widely regarded as one of the most shameful in the history of American civil liberties violations.

Now more than 70 years later, sources close to President-elect Donald Trump are suggesting that he may be thinking of using this event as a template for how he treats American Muslims.

Kelly then confronted Higbie about Kansas Secretary of State Chris Kobach, who said he was working on a proposal to create a registry for immigrants from Muslim countries.

"Yeah, and to be perfectly honest, it is legal. They say it will hold constitutional muster," Higbie told Kelly. "I know the ACLU is gonna challenge it, but I think it'll pass, and we've done it with Iran back — back a while ago. We did it during World War II with Japanese, which, you know, call it what you will, maybe —"

Higbie wasn't wrong about the fact that a Muslim registry is most likely constitutional. While the program is certainly discriminatory and could lead to an upsurge of Islamophobia in this country, it's unlikely that it would be deemed illegal. (As legal scholar Professor Jonathan Turley of George Washington University explained to Politico on Wednesday, “a president’s power is at its apex at the nation’s borders” and the Supreme Court has “consistently reaffirmed the power of the president to control the entry and exit from the country as a matter of national security.”)

At this point Kelly interjected, sounding incredulous and horrified at what she had just heard.

"Come on. You're not — you're not proposing we go back to the days of internment camps, I hope," she said to Higbie. As he tried to sputter out a reassurance, Kelly continued by pointing out, "That's the kind of stuff that gets people scared, Carl."

It is unlikely that Higbie's reply alleviated those fears.

"I'm just saying there is precedent for it," Higbie declared. "And I'm not saying I agree with it, but in this case I absolutely believe that a regional based —"

Kelly then repeated her earlier point, saying to Higbie, "You can't be citing Japanese internment camps as precedent for anything the president-elect is gonna do."

Higbie dug in his heels, insisting that Trump was only looking out for America's best interest.

"Look, the president needs to protect America first, and if that means having people that are not protected under our Constitution have some sort of registry so we can understand, until we can identify the true threat and where it's coming from, I support it," Higbie told Kelly.

The Kobach plan would involve reviving the National Security Entry-Exit Registration System, a 2002 program that Kobach put in place when he worked for President George W. Bush's Justice Department. It required non-citizens in the United States from 25 countries (all but one comprised of Muslim residents) to register with the government and keep it appraised of their movements. The program was eliminated by President Barack Obama in 2011 when he delisted all the countries whose residents had been targeted.