Woody Harrelson on his new role in a coming-of-age drama: "I was nominated in high school for class clown. It was disappointing I didn’t get it." 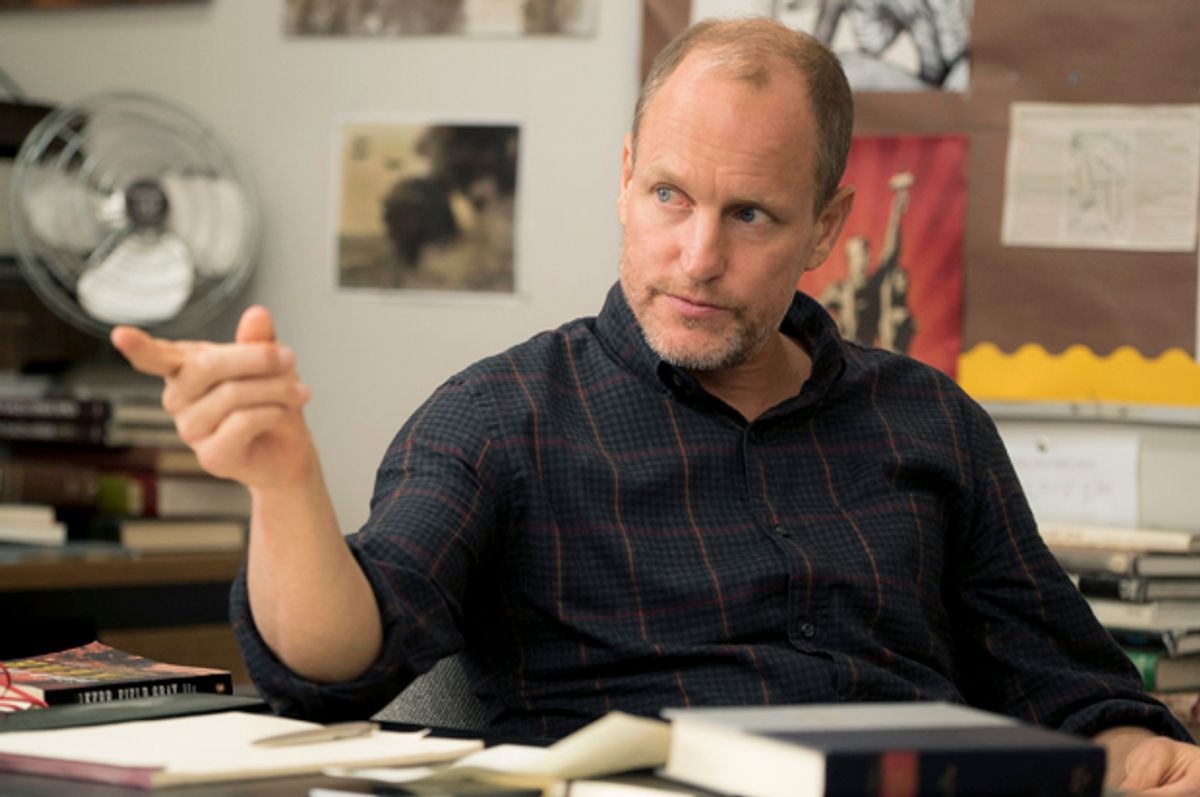 Woody Harrelson in "The Edge of Seventeen" (STX Entertainment/Murray Close)
--

Woody Harrelson, comic goofball, advocate for the legalization of marijuana and two-time Oscar nominee, takes a supporting role as a teacher in the terrific new teen comedy-drama “The Edge of Seventeen.”

His character, Mr. Bruner, provides sarcasm and solace to Nadine (Hailee Steinfeld), a nearly always inconsolable student whose already fragile life starts to unravel further when her best friend Krista (Haley Lu Richardson) starts dating her brother Darien (Blake Jenner), and she tries to capture the attention of her crush (Alexander Calvert) by sexting him.

Harrelson’s subtle, downplaying shows how much his character cares even when the melodramatic Nadine strains his patience.

It’s a nice change of pace for the actor who has gone all out in films like “Natural Born Killers.”

Harrelson chatted with Salon about his teenage years, inspirational books and teachers, as well as why he is drawn to comedy.

I was a pretty tame teen. I wasn’t rowdy. That came later in life. I liked sports and had a few good friends I would hang out with. I didn’t do much dating until I got into college and then [it was] pretty minimal.

Did you have a particular crisis as an adolescent that made you feel especially vulnerable?

I fell in love when I was 17 with this girl Maria, but she broke my heart. Her parents took an immediate dislike to me. I couldn’t change their mind. They forced us to split up.

What observations do you have about coming-of-age now that you are older and have been through it? What do you wish you had known?

I don’t imagine that coming-of-age was hard for me, but the feeling kids have is that the bottom is about to drop out and you have nothing to hold onto. The best thing you can do is tell yourself that everything is going to be OK.

You have three children. What advice do you give them about growing up? And do they even listen?

[Laughs.] I guess I give them advice on little things here and there, but I mostly feel I learned a lot from them like how to be a great human being. They are phenomenal people. They care about the world and their friends.

Was there a particularly inspirational teacher that you relied upon for advice when you were in school?

Well, I had a teacher named Mrs. Drake who was an English teacher in high school who was really amazing. The most important thing is that [teachers] care and are not just going through the motions. That helps.

Did you have a good relationship with your parents, or were you more like Nadine, who has conflicts with her mom?

Yeah. I was a momma’s boy. I gotta admit it. [Laughs.] She’s a great mom. She still is. She really sacrificed a lot to provide for us. She never had a high-paying job, so she was short of money, but she did everything she could for us. She wanted to get us through the journey to get us to adulthood. I admire her for her sacrifices.

Mr. Bruner tends to deflect Nadine with sarcasm and humor. What can you say about being such a wise ass?

[Laughs]. I don’t know that I’m the best guy to comment on that. . . . Humor as a deflecting device is the way to go. I love making people laugh. So in that sense I am psyched that this film does make people laugh, and at the same time you’re crying because it gets emotional. It’s not superficial. It goes deep, like John Hughes crossed with James L. Brooks, who produced it. In the end, you are exuberant.

Mr. Bruner teaches because he sees importance in his work. What motivates you to do the work you do?

I love it. I really do. It’s like that thing Karl Wallenda said, “Life is on the wire. The rest is just waiting.” I feel most alive when I’m acting and performing.

Why did you go into acting?

I was nominated in high school for class clown. It was disappointing. I didn’t get it. I do like to make people laugh. I just remembered this: I went to a new school in Ohio after being in Houston. At first I never said a word. I was nervous. I was bullied a bit.

Then around sophomore year, I started to open up, and I used to hear the teacher say something and I would think of a funny line [in response] and I never would say anything. And I’d kick myself after. Why not just say it? Finally I did, and there was a dead quiet and then a big laugh. And that changed my life right there. If they had stayed quiet, I’d have been a CPA.

You've been quite vocal about hemp and legalizing pot. What do you think about teen drinking and drug use, some of which is seen in “Edge of Seventeen?”

I never drank any alcohol until I was 20, and I didn’t take my first puff until I was 21. I don’t believe in it for kids. I have a straight edge approach philosophically. But on the other hand, to be realistic, these things do happen. Hopefully it doesn’t interfere. If you become addicted, it’s a problem.

Nadine is surprised by something in Mr. Bruner's life. What might be something people would be surprised to know about you?

I love chess. I love reading.

I am all over the map. I generally am into fiction, but lately I’ve been reading more historical novels. I’m really interested in World War II and everything that happened. Right now I’m reading “Source Field Investigations,” by David Wilcock, which is wild. You should check it out. It has had a big impact on me and how I see the world.