So much for "I just don’t believe in settling" 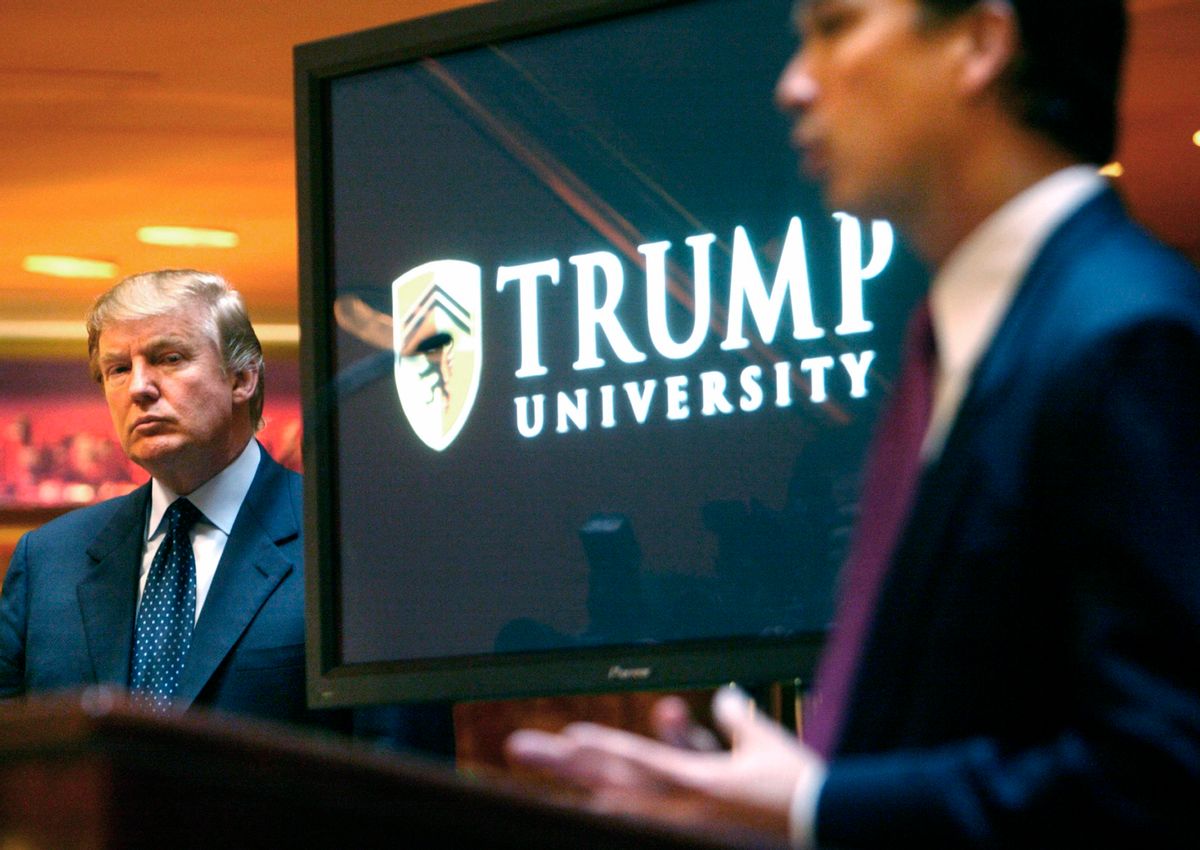 In May 23, 2005, Donald Trump, left, listens as Michael Sexton introduces him at a conference where he announces the establishment of Trump University. (AP Photo/Bebeto Matthews)
--

A little more than a week after his stunning presidential victory and just 10 days before a federal class action was set to be heard by a San Diego jury, Donald Trump went back on repeated pledges and decided to settle all three civil fraud suits against the now-defunct Trump University for $25 million.

New York Attorney General Eric Schneiderman announced the settlement in a statement released on Friday afternoon. Schneiderman said that under the terms of the settlement, "every victim will receive restitution." As part of the settlement, Trump has agreed to pay New York as much as $1 million in fines for violating state education laws. Other portions of the settlement will go to the more than 6,000 plaintiffs whose claims made up the three lawsuits. (The cases include a second class action in San Diego as well as a separate suit filed by Schneiderman, according to The New York Times.)

The three lawsuits alleged that Trump's for-profit university fraudulently promised courses that would be taught by instructors "handpicked" by the real estate executive himself — all to entice the students to pay as much as $35,000 to the school. Former students and employees said Trump University typically targeted desperate people and pressured them into purchasing expensive programs that failed to teach genuine business skills as advertised. According to the Associated Press, the settlement does not require Trump to admit any wrongdoing.

Trump repeatedly said during his presidential campaign that he did not want to settle the Trump University class action, even infamously attacking the federal judge, Judge Gonzalo Curiel, who was set to oversee one of the cases as having an "absolute conflict" in the case because of his "Mexican heritage."

Now by settling his fraud cases before taking office, Trump can avoid facing Judge Curiel in the opening months of his assuming his new presidential role. (Trump has none other than Paula Jones to thank for the specter of a civil suit looming over the Oval Office. It was her 1994 sexual harassment suit against President Bill Clinton that set a precedent for the interrogation of a sitting U.S. president as a defendant in a case before a civil court.)