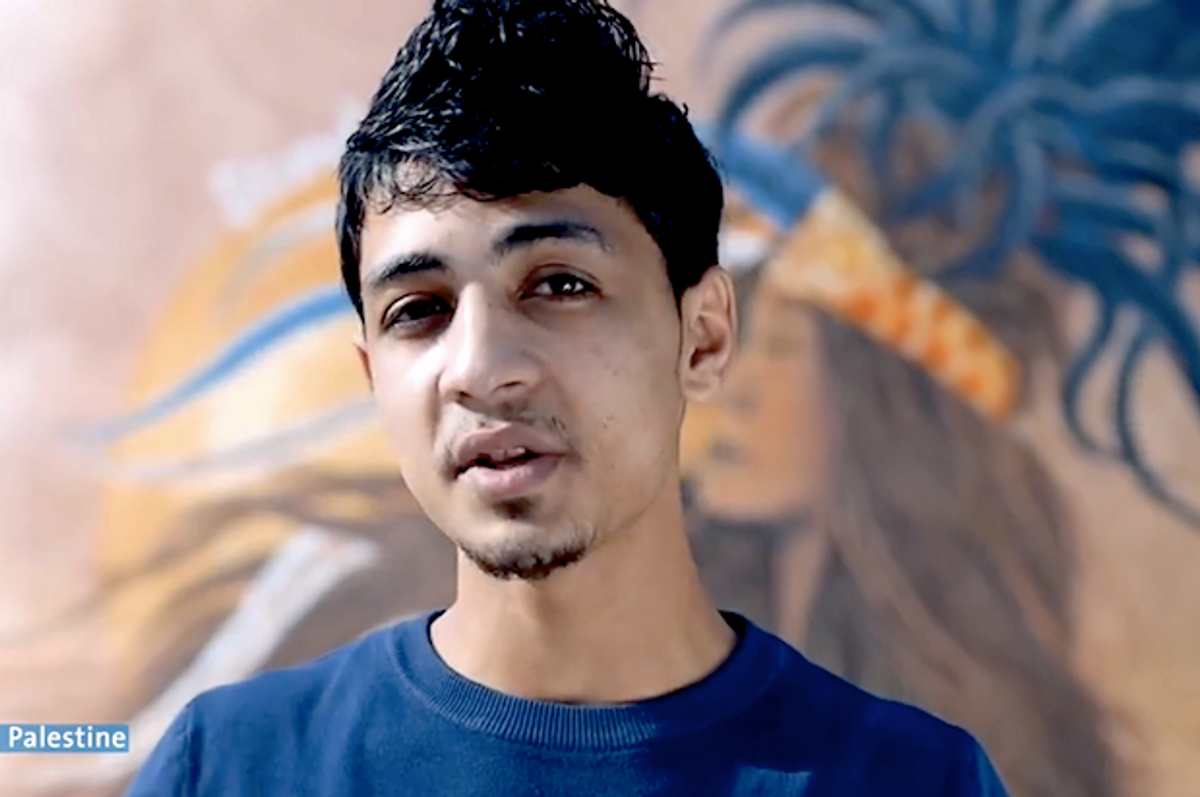 Native Americans have for months led protests against the Dakota Access pipeline, a $3.8 billion, nearly 1,200-mile construction project that will transfer oil across several states. Thousands of activists from around the country have traveled to North Dakota to support the indigenous resistance at the Standing Rock Indian Reservation.

Now, Native groups in the U.S. have support from the other side of the ocean, too.

Palestinian artists in Gaza released a video and letter this week expressing solidarity with the NoDAPL demonstrations.

"We stand with Standing Rock," several Gazans declare in the video.

Israa Suliman, a young student and writer in Gaza, penned an open letter that accompanied the video.

"Although we are of different color, religion, culture and place, I have learned, as I read about the protests at Standing Rock, that we have much more in common than differences," Suliman wrote in the letter to indigenous Americans. "When I read your history, I can see myself and my people reflected in yours. I feel in my core that your fight is my fight, and that I am not alone in the battle against injustice."

"My ancestors," she added, "were the indigenous people, just like you. And they suffered the same fate as your people. America's policy of occupation and displacement through forced marches like the Trail of Tears, and the gradual transfer of so many of your people to massive, impoverished reservations, hurts me deeply because it is so similar to the ethnic cleansing of my ancestors by the Israeli military occupation in what we call al-Nakba (the catastrophe)."

Suliman noted that Palestinians today control just 22 percent of the land they lived in before the state of Israel was founded in a 1948 war that included mass expulsion and displacement of the Arab population. There are roughly 5 million Palestinian refugees in the global diaspora, according to the United Nations.

The links between indigenous Americans and Palestinian are more than just historical; they are material. AlterNet exposed how a large security corporation hired by the pipeline company has also profited from Israeli prisons, where Palestinians are abused and even tortured.

"Like you, we don’t control our natural resources," Suliman continued in her letter. "Just as you were not consulted about the Dakota Access Pipeline that will traverse your land and contaminate your water supply if installed, we are not consulted by Israel, which wants to mine the gas supply in our harbor for its own use and monopolizes the water supply in the West Bank for the green lawns of its own residents — leaving Palestinians parched and dry."

According to the U.N., 95 percent of the water to which Gaza residents have access is not safe to drink. A 2015 U.N. report warned that the Gaza Strip, with nearly 2 million inhabitants, could become “uninhabitable” by 2020, due to the Israeli government's destructive bombing campaigns and stifling blockade.

"We too know that 'water is life,'" Suliman wrote. Her letter was published by We Are Not Numbers, a group that offers mentoring and support for young writers in Gaza to help them share their stories with the world. We Are Not Numbers, which also helped produce the video, is a project of the Euro-Mediterranean Human Rights Monitor, an independent nonprofit.

Like Gazans, indigenous groups in North Dakota are worried about their access to clean water. The Standing Rock Sioux tribe, which has led the NoDAPL protests, warns that its water and land will be polluted by the Dakota Access pipeline, which is being built by Energy Transfer Partners, a Fortune 500 fossil fuel company based in Texas.

U.N. experts have called for a halt in construction of the Dakota Access pipeline in an area that will affect Native Americans. They have also criticized U.S. authorities for their "militarized" crackdown on NoDAPL protests, accusing them of using excessive and unjustified force.

Hundreds of protesters have been arrested. Some indigenous activists have said they were treated like animals and held in dog kennels.

Other Palestinian groups have expressed solidarity with Native Americans as well. The Popular Front for the Liberation of Palestine, a revolutionary socialist Palestinian organization, released a statement in October expressing "its strongest support and solidarity to the indigenous resistance at Standing Rock against the Dakota Access Pipeline and the settler colonial project of genocide and plunder in North America."

International solidarity with the movement for Palestinian human rights and liberation has increased in past years. The Movement for Black Lives has criticized the Israeli government for its system of apartheid against Palestinians, and solidarity has continued to grow between black Americans and Palestinians.