From truthiness to post-truth, just in time for Donald Trump: Oxford Dictionaries' word of the year should scare the hell out of you

Back in the innocent days of 2006, "truthiness" described our political reality. We're way past that now 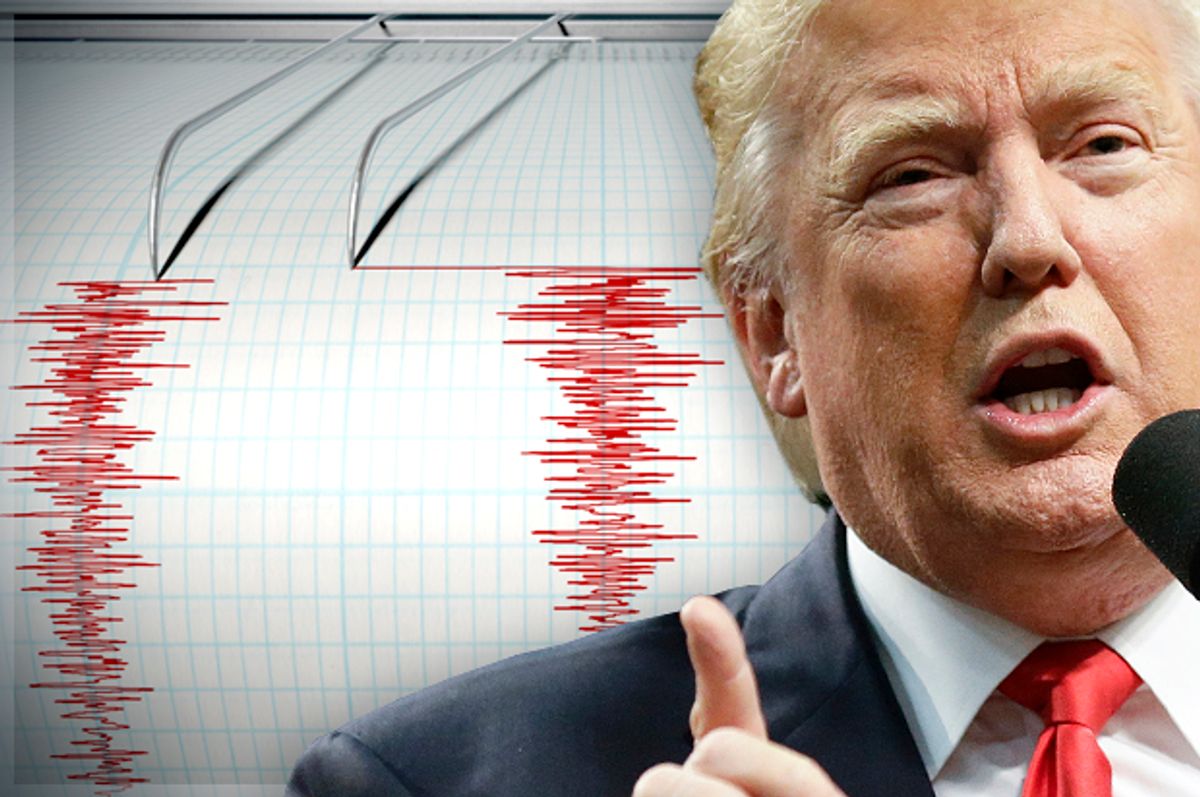 Remember back in 2006, when Stephen Colbert, the fictional conservative blowhard TV personality played by comedian Stephen Colbert, coined the term "truthiness" on his Comedy Central show "The Colbert Report"? Truthiness, as Colbert defines it, is "the belief in what you feel to be true rather than what the facts will support.”

It was the perfect word to serve the nation in the days of the George W. Bush administration. If you felt that Iraq had weapons of mass destruction, you could believe it was true that the U.S. had sufficient grounds to invade the country and that the Bush administration and the lawmakers who voted in favor of this action did the right thing. After all, believing is the same thing as knowing in a country that consistently dumps on liberal arts education while only pretending to champion science instead.

With truthiness, though, we still recognized that truth exists, just that it could be overridden and bent to serve our own emotional purposes. Even the word itself suggests fidelity to a kind of truth — perhaps the loosiest-goosiest brand but still recognizable to its mother.

In the cold, bitter light of November 2016, truthiness sounds positively quaint. We're in the "post-truth" era now, baby. The word of this year gained popularity in the aftermath of the Brexit vote and took on a life of its own and three more heads, it seems, as Donald Trump's campaign for president with its wild claims to "Make America Great Again" proved unstoppable. Now it's the Oxford Dictionaries' word of the year for 2016.

While Colbert joked Thursday on "The Late Show" that post-truth is "clearly a rip-off" of his truthiness, it's probably closer to the truth (that abused beast!) to instead say that post-truth is a direct descendent. In the 10 years that have passed, enough bullshit has floated in our public discourse that the level finally rose high enough to wipe out the bridge between fact and fiction.

Post-truth is defined as a state in which “objective facts are less influential in shaping public opinion than appeals to emotion and personal belief.” Post-truth admits that facts exist but rejects their political utility. It's not about what you personally believe but a crass and quasi-abusive exploitation of the human impulse to reach toward faith and tribal affiliation.

A commitment to indulging truthiness thus gave rise to the post-truth era. Now, you don't need to feel a lie is true in order to promote it as a fact, an ugly reality that we were slow to recognize in this divisive election year. You just have to name it as the most expedient means to your political end and repeat it loudly in fifth-grade reading level English until it becomes a headline on a sharable link and takes on a life of its own.

Whether that headline is attached to a fake news article or the real thing doesn't even matter. As BuzzFeed reported this week, fake news sites outperformed legitimate news media on Facebook in the last months of the election season. They're everywhere, and while they look obviously fake to the trained eye, I taught undergraduates to write research papers long enough to know that detecting the distinction is a speciality skill now, not general knowledge. Don't laugh, smug liberals: I've seen those Occupy Democrats links on your timelines, too.

On Thursday night President-elect Donald Trump tested the postelection post-truth waters when he announced via Twitter that thanks to his efforts, Ford Motor Co. would not be relocating "the Lincoln plant in Kentucky" to Mexico. Trump claimed he "worked hard" to keep this factory from moving across the border, he tweeted in a follow-up, because "I owed it to the great State of Kentucky for their confidence in me!"

I read these tweets with surprise, as did many in Louisville, where I live and where Ford Motor Co.'s Kentucky plants are located. The Lincoln MKC is made at the Louisville Assembly Plant, but it's not the only model built there, for starters, so there is no "Lincoln plant." And while The Courier-Journal reported in November that Ford was planning to stop production of that Lincoln model in Louisville, both the company and an United Auto Workers' representative said no local jobs would be affected because the company would be replacing Lincoln production with another Ford model.

There had been no reports of Ford intending to move the Lincoln MKC to one of its existing Mexico facilities until after this announcement. Never in any of the reporting on the company, from Ford's perspective or that of the workers, was the Louisville plant itself in any danger of closing or cutting back its workforce.

(It bears mentioning that the number of Louisville folks with "confidence" in Donald Trump on Nov. 8 was just 40 percent. Of course the Commonwealth, whose citizens overall went for Trump at the voting booth, still benefits from Ford's contribution to its tax base and employment rates.)

Kentucky Gov. Matt Bevin — often an unexpected practitioner of executive-level Weird Twitter performance himself — smoothed out a bit of Trump's loose grasp on the particulars with a contextualizing tweet:

Again, whether the production of this particular model of Ford car stayed in Kentucky or went to Michigan, or Mexico, the number of Kentucky jobs would have stayed the same. Local NPR affiliate WFPL laid it all out, and more details from The Courier-Journal followed. So what did Donald Trump and Ford Motor Co. deliver? Neither new jobs nor newly safeguarded existing jobs.

But in a post-truth media era, that is meaningless. The tweets were picked up immediately by the news media with straightforward headlines that didn't challenge Trump's claim. Toronto Star journalist Daniel Dale collected a handful immediately. The usually reliable Reuters News Service offered the not-helpful headline, "Trump says Ford not moving plant to Mexico," and ABC News went with the not-incorrect softball, "Donald Trump Takes Credit for Keeping a Kentucky Ford Plant from Moving to Mexico."

The Wall Street Journal got closer with "Ford Says It’s Keeping Lincoln Production in Kentucky After Donald Trump Tweets" but this is still a spectacularly unhelpful framing of the real story, which amounts to "Donald Trump Takes Credit for Preventing Something That Wasn't Happening in the First Place, and When a Howler Like This Is Told in the First Act, Expect It to Pay Off in the Third."

The absence of correctable errors in those other headlines is more insidious than all the context they leave out. Trump might as well have claimed responsibility for the hard work it took him to convince the Earth to orbit around the sun. Several major award-winning news sources legitimized his hollow boast by repeating context-free facts in headlines that 6 out of 10 people skimming their feeds won't read past.

Perhaps mainstream news outlets are responding to the repeated criticism from partisan right-wing media that they are biased and are therefore omitting helpful, corrective context from their headlines in an effort to appear fair and bipartisan. After all, facts are facts, and you can't be criticized for repeating them, right? It is objectively true that there is nothing factually incorrect about those headlines.

But it is also objectively true that these headlines don't tell readers the important information a reported story would have revealed about those facts. The New York Times, having born the blunt end of much of Trump's media-critic Twitter abuse, didn't fall for this approach, thank God. Because the twisted joke is that such practices don't actually engender trust from suspicious readers; they only help build credibility for dubious claims. There's no such thing as truth anymore, remember? Only ammunition.

When the reality of Trump's brag is challenged — as it will be if his administration fails to make good on his campaign promise to bring back a significant number of manufacturing jobs to the U.S. from overseas — the post-truth era will enshrine this moment as the one when ABC said Trump can take credit for keeping a Ford plant open in Kentucky, so why are you saying he hasn't done what he promised to do for manufacturing jobs? Do you have something against America being great?

What Trump was likely doing Thursday evening was not exactly testing the post-truth waters — he knows the tears of his opponents are warm, salty and at perpetual high tide — but staging a muscle flexing that would make Arnold Schwarzenegger blush. Look what happens, his tweets and Bevin's follow-up say, when you back me. You will be rewarded with gifts that only I can procure.

Autoworkers know the truth, but in post-truth America they weren't the primary audience for this little pageant. That would be those who are not cheerleading Trump, and they have just been invited to imagine what the inverse might look like if they challenge his power directly: If he crushes you for it, what will the headline be?