Donald Trump will not destroy America: The geopolitics of our next president

Whatever Trump brings, it will not be the fall of America — that is a bigger project than any one president 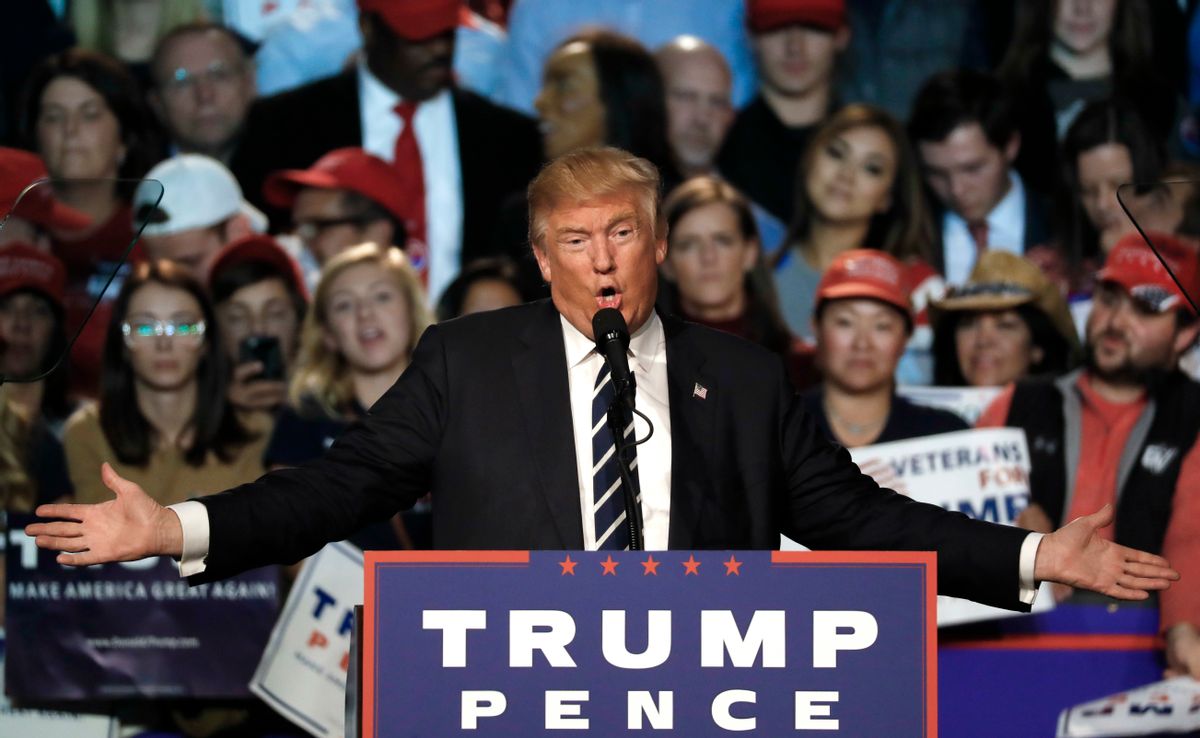 What, exactly, does President-elect Donald J. Trump believe? From 1987 until 1999, he was  a Republican; that year, he changed to the nearly defunct Reform Party, an obscure New York City legacy party. He then became a Democrat from 2001 until 2008, when he switched back to the Republicans again.

Meanwhile, simply in the past week, he’s walked back from several campaign pledges, including his promise to deport many millions of immigrants and wholly repeal the Affordable Care Act, or Obamacare as it’s so often known.

And yet it matters much less than the 24/7 news cycle implies. Trump is not the be all, end all of the United States of America. He, as Obama before him and Bush before him, must play by the rules.

This I have seen floating on various Facebook comments, so often upvoted to sky-high levels. Forget, of course, that Facebook is increasingly a source for misinformation: Let’s take a look at the claim itself.

For Trump to undo America’s superpower status, he would have to lose not several hard-to-lose pillars that hold up U.S. power. Moreover, he’d have to allow a near-peer to replace the United States in a significant way in Europe or Asia. This is a tall ask for a man who may only have until 2018 until Congress switches back to the Democrats.

American power is upheld by three pillars: geography, demography and influence. Geographically, the United States enjoys access to the Atlantic and Pacific Oceans, the most valuable oceans on Earth, while its latitude gives its farms a strong growing season. Its size bestows upon it a huge resource base, while its river systems make trade cheaper and its agriculture more fertile. Additionally, it has only two land neighbors it must defend from at any given time.

Its near-peers — China and Russia primarily — have some, but not all, of those advantages. Neither power has good access to the Atlantic; Russia’s river system isn’t as good as America’s; both must defend from no less than 14 land neighbors at any given time.

Unless Trump somehow undermines American geography by losing large chunks of America to rebellion, this advantage will be there in 2020 or 2024, meaning a successor can recover from Trumpian mistakes. There is no reason to believe that Calexit, or any sudden secessionist movement, will go anywhere; besides, the last time someone tried, the Federal government butchered them.

Demographically, the United States has a huge and still young population. It doesn’t have Russia’s post-Soviet demographic slide, nor China’s greying burden. Short of plague or nuclear war, that advantage too will be intact by the end of a presumable second Trump term.

Finally, Trump would also have to provoke a collapse of American influence worldwide. This would require repeated and pointed mistakes that would collapse NATO, the American Pacific alliance network, U.S. ties to the Persian Gulf Arabs, U.S. ties to Israel and America’s influence in Latin America.

The way to think about geopolitical power is best illustrated by the diagram below. Geography gives a nation-state the ability to establish demography; demography, in turns, allows a nation-state to develop influence. Because it’s the outermost layer, influence is easiest to lose; being snubbed at a meeting is quite different from losing a quarter of your population during a peace treaty. Trump is in no position to lose the geographic or demographic pillars of the superpower.

Yet the toll on influence is worth considering

Trump’s choices will absolutely profoundly affect that outermost layer. American presidents have long had a great deal of leeway over American foreign power: They have squandered, or shored up, U.S. geopolitical influence as readily as the moon waxes and wanes. America has long been able to afford this: It’s geographic and demographic strengths allow mistakes others cannot afford.

Trump has been terribly unclear about everything foreign policy-wise minus trade deals. Yet that is telling: Trump is clearly committed to American protectionism and America First economics.

That is an assault on American worldwide economic influence, at least as it stands now. Since 1991, the United States has allowed a handful of its elites to establish powerful trade deals worldwide, slowing bringing powerful nation-states into U.S.-style capitalism. Sold as a way to “raise all boats,” this system has instead concentrated wealth into ever-less-efficient echelons of the elite. Any politician who attacked it was bound to eventually attract a following.

This happened first with Brexit, with Nigel Farage telling Britons that cutting Britain off from Europe would restore the wealth balance of yesteryear. It was essentially the same message of the Trump campaign: End free trade, and make America great again.

So if the United States does decide to shut down trade deals, it will mean other nation-states will take their cue to do so as well. This means the United States will essentially be giving up conquered territory so it can withdraw, consolidate and conquer the same territory anew. Having convinced much of the world to adopt globalization, it may waste a great deal of influence and energy trying to reverse its own success.

And as for America’s allies? Trump could give them a hard shove towards rearmament

All of America’s key allies, including France and Britain, are comparatively disarmed — none of them are capable of the great power projection of yesteryear. That suits long-term American interests fine: The fewer armies and navies on the map, the better. Both NATO and America’s Asian allies believe the United States, with its massive navy and awesome military technology, will ride to the rescue, and therefore don’t need to pay as much for their own defense.

This is wise from America’s long term point of view. But Trump was elected on a platform of balancing the budget the way one balances a household Mint account. They are far from the same experience, but wisdom does not always win elections.

So if Trump is serious in his desire to force American allies to pay more for defense, he will instead begin a slow road towards a multipolar world that does few any good. America’s allies largely behave well because they leave the warmongering to the United States; consider that Japan and North Korea despise one another but have never come close to war, or that Greece and Turkey have scores to settle, and domestic audiences to distract, yet dare not shoot one another.

It is less likely that old imperial powers like Britain and France, who disarmed voluntarily, will suddenly return to empire, but rather that forcibly disarmed foes will begin to behave independently and unpredictably. These are numerous: Japan, Poland, Turkey and even potentially Germany all lost big in the 20th century, and all were once great powers. Japan has squabbles with China and both Koreas; Turkey desires to crush Kurdistan before it even happens, and has disputes with Greece; Poland fears a return of Russian power, and means to resist it; and Germany’s Nazi guilt is both literally and figuratively dying out, replaced by the xenophobia and nationalism gripping other European nation-states.

Should any of these powers believe the United States will no longer police the world, they will have incentive to rearm and to act in their own interests. They will forge alliances outside of the United States; a Polish coalition of eastern Europe could replace NATO, Japanese nationalism could push American influence from both the Koreas and the Sea of Japan, Turkish armies could reshape both Syria and Iraq to Ankara’s, and not Washington’s, liking. And if America begins to fight trade wars, there is no reason to believe Germany, if American influence is too weak in Berlin, won’t fight back.

The problem with all that? It’s slow, and the presidency has limits

Recall that Barack Obama campaigned in 2008 on "getting us out of Iraq," yet has been forced to redeploy troops to Iraq in the face of the Islamic State threat. ISIS did not happen because Obama withdrew; it conquered because Obama withdrew, since it faced no credible enemy in the Iraqi army. To lose Iraq to the Islamic State was unacceptable and forced Obama’s hand.

That’s because within the ranks of the elite, as well as with voters in general, a realization took hold that Iraq was worth deploying power for. This was fast because the conquests of the Islamic State were fast, but had ISIS slowly crept up and taken Mosul over years, rather than months, the results would have been the same. There are geopolitical redlines that, if crossed, will activate both elites and citizens to respond.

This is a key limitation of all leaders: Propaganda aside, they aren’t gods. Chinese leaders are forced to balance economic growth with state cronyism to keep power; Iran’s mullahs must balance religiosity with a need for outside investment, while Russia’s Putin must balance openness with the world with the need to keep Russia closed off from anything that might undermine him.

Trump has already walked back from some his more extreme proposals: This is the nature of the presidency, limited even as president-elect by the Constitution, Congress and the institutions that make up its government. This is not to say that the Trump presidency will suddenly be a good thing, only that if it makes too many mistakes, elites will take advantage of its weaknesses to replace it with a more effective president in 2020.

If Trump slowly erodes American global influence to no great disaster, and wins a second term, it could set the stage for the normalization of withdrawal. A president might only win in 2024 on the basis of keeping the Trump world order, with the implication to withdraw further.

That does not, however, threaten America’s geography or demography, nor does it suddenly fix the disadvantages Russia and China have. A president in 2024, elected on the platform of restoring America’s world position, would still have a superpower to do so. They might have to work hard to regain lost ground, but few other nation-states in history have ever been as able to wax and wane like the United States.

The long-term threats to America’s superpower status are more distant: Someone finding a way to trade via outer space would negate America’s advantages on the Pacific and Atlantic Oceans, while over time America’s demographic advantage might go the way of Western Europe and grey to the point of weakness. Secessionist movements, especially along the border with Mexico, could crop up later in the century; so too could regionalists, who may over time come to despise other parts of the country as the North and South once did. But that is a long way off, and beyond Trump’s power to accomplish in just a short four-eight year presidency.

Whatever Trump brings, it will not be the fall of America — that is a bigger project than any one president.