Fall TV ratings: The networks felt our election pain too

Emerged from a contentious election, we take stock of the shows that succeeded in spite of the political disruption 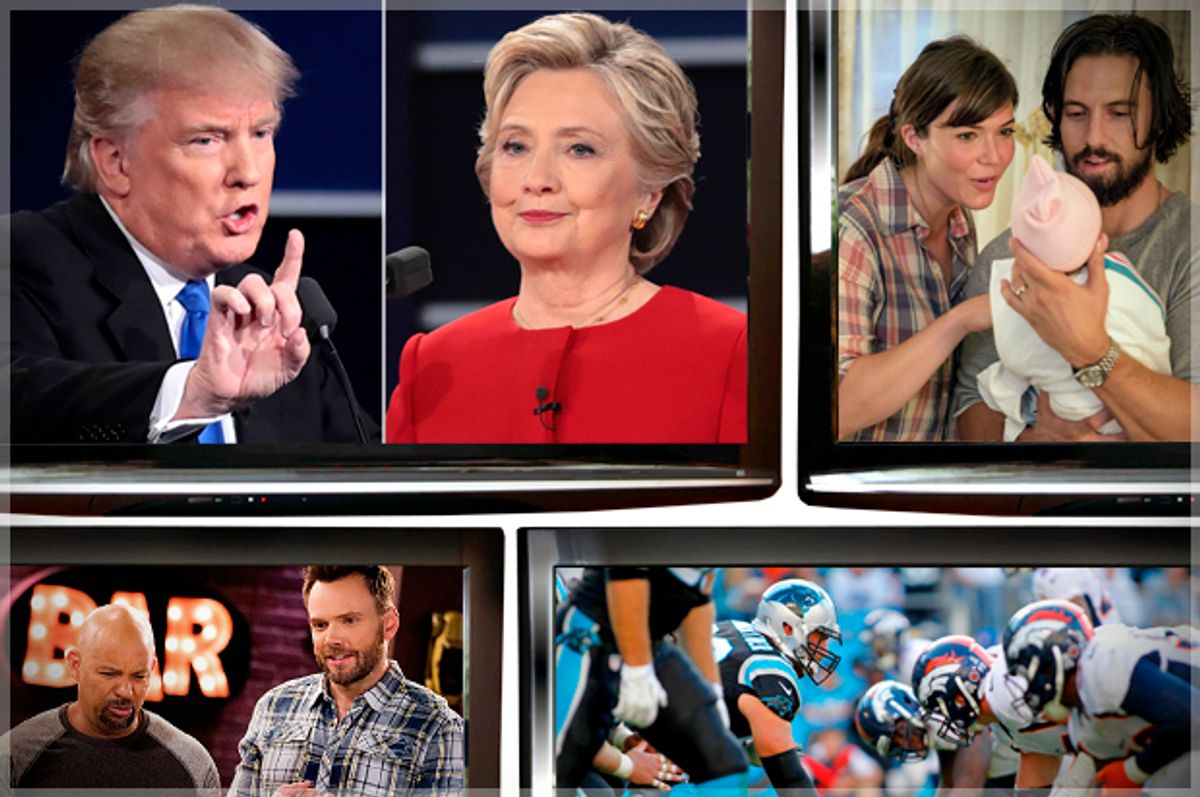 Regardless of whether last week’s election results left you pleased or petrified, there’s one truth almost everyone but the blissfully numb can agree upon: It has been a tough fall.

As the election took its toll on regular folk, broadcast TV networks felt our pain in the form of further abandonment. To be fair, the audience for same-day viewing has been decreasing for several seasons now. But 2016’s two-month stretch has been particularly strenuous on NBC, CBS, ABC and Fox.

Bear in mind, the circumstances contributing to these declines have been extraordinary as well. There was that legendary World Series that saw the Cubs break their 108-year curse. Then, toss in a presidential campaign endgame that threw gasoline on the flames of our collective anxieties and led to scheduling shifts and preemptions.

“Viewing distractions and scheduling disruptions surrounding election coverage undeniably impacted the numbers across television this fall,” said an ABC network executive who asked not to be named. For evidence of this one need look no further than the woes publicized last month by the NFL, which contended with one of the worst ratings swan-dives in a decade, with a reported 11 percent year-over-year decline in viewership over the first four weeks of its season.

In spite of this, as that same executive pointed out, the changing ratings fortune of network television has led to further shifts in the ways networks have measured success.

And the numbers aren’t the only data telling a story for fall. Some of the season’s most significant success stories may be attributed to viewers seeking comfort and sticking with the familiar.

The new season’s top success story, NBC’s “This Is Us,” is an example of both of those ideas at work. While early indicators pointed to the likelihood that it would be a hit, one has to wonder if the ensemble drama following a trio of unconventional siblings and, via flashback, their parents’ relationship, would have struck as much of a chord with viewers as it has during this uniquely divisive and doom-filled political season.

Set against the frenzy and fury, “This Is Us” serves emotional sustenance to an audience that hasn’t lost its taste for the drama; following its election-night preemption, it returned this week as Tuesday night’s No. 1 show in adults 18-49, and increased its audience by 13 percent. Although it got an initial assist from having NBC’s hit reality show “The Voice” at launch as its lead-in, “This Is Us” has been able to maintain and grow its audience, and has been picked up for a full season. (“The Voice,” in contrast, lost more than a quarter of its audience from where it was last year at this point in the season.)

In other cases, it’s familiarity that wins the day. Quality does play a role, of course, or at least it does in the case of Fox’s “Lethal Weapon,” the second-most-popular new drama of the fall, which has made its mark more or less independently. Fox instead gambled on the movie franchise’s brand recognition paired with a soundly written script and two leads, Damon Wayans and Clayne Crawford, who have tremendous chemistry. It’s also been picked up for a full season.

CBS’s “Bull” is another beneficiary of familiarity, in that it stars Michael Weatherly, the longtime co-star of the highest-rated scripted drama on television, “NCIS.” When viewers lack information on a title, a beloved face can be enough to make them try it out.

But in truth, CBS’s audience prefers the kind of programming to which it has long been accustomed, meaning procedurals and easily digestible comedies. If TV viewers were looking for a place to hide from election mania, ostrich style, then CBS might as well be broadcast’s soft, silky sandbar into which we can bury our heads, a place where frail newborns survive by piggybacking on the strength of stalwart lead-ins.

Consider “The Great Indoors,” starring Joel McHale, Stephen Fry and Christopher “McLovin’” Mintz-Plasse. It’s one of several formulaic new comedies joining CBS this fall, powered by a millennials-versus-grandpa-Gen-Xer plot, and premiered at the end of October to reviews most accurately described as middling.

“Bull,” “Kevin Can Wait” and “The Great Indoors,” in addition to Matt LeBlanc’s just east of awful half-hour “Man with a Plan” and that reboot of “MacGyver” you were dying for have all received full-season orders. And why not? Currently they’re CBS’s main success stories in a season where almost every other series besides “NCIS: Los Angeles” and “Hawaii Five-0” is doing a downhill slalom in the ratings -- with second-year comedies “Life in Pieces” and “The Odd Couple” down by around 30 percent each from where they were last year.

Does this mean we, the viewers, are settling? Perhaps, if you don’t factor in the recently revealed statistic that indicates that more than half of all TV viewers don’t want to start a new series without having access to prior episodes. Considering that, this fall’s crop is faring relatively well.

And yet, we simply don’t know how many viewers decided to opt out of the brutal election cycle-dominating broadcast and cable TV by cord cutting and streaming content instead. Netflix may be providing an ample supply of chill this fall, but as for how much, who knows? The company doesn’t release any data about its stream rates. Neither does Amazon, for that matter.

What we do know, however, is that a number of dramas and comedies are getting a significant lift after delayed viewing. (It’s so much more civilized to hold off and binge later. That way you can also purge those vexing campaign commercials with the fast-forward feature.)

If a surge of interest in all things election-related and a dream of a baseball season ate into football’s ratings enough to make the NFL cry uncle, that’s probably because those are all live events that lose their freshness almost immediately.

ABC’s “Designated Survivor,” on the other hand, performs better after factoring in the audience numbers from seven days of DVR playback. It’s the top gainer in all viewers, experiencing a 118 percent increase in its ratings in the advertiser-favored 18-49 demographic. One cannot discount the perennial popularity of its star Kiefer Sutherland, either.

All of that may take a bit of the sting out of the network’s reported 22 percent year-over-year decline among younger viewers. In spite of its woes, the fact that “Designated” and its new comedies “Speechless” and “American Housewife” are either tied or close to CBS’s “The Great Indoors” and “Bull” in the 18-49 demo is noteworthy in this tough season. All of those aforementioned ABC series have been granted full first seasons. (Fellow ABC freshmen “Notorious” and “Conviction,” on the other hand, did not escape the axe.)

If there’s a bright spot to all this -- beyond the end of the election horror show and what seems to be a slow crawl toward the doom of polite society -- at least the challenging TV climate has resulted in something resembling patience on the part of networks. Post-Thanksgiving brings a lull to the schedule, giving viewers a chance to catch up and see what (if anything) we missed while other telecasts bellowed and brayed for our attention.

What will be interesting to see is how well this fall crop weathers a winter pause and fares against new entries to the schedule. Election blues may have granted a reprieve to borderline shows, but once series return from hiatus, the onus is completely on each of them to earn your remote’s vote.