The Koch brothers' hidden election gambit: Just because the multibillionaires didn't back a presidential candidate they were hardly idle

The Koch siblings sunk their tentacles — and cash — deep into local races, fielding 1,600 staffers in 38 states 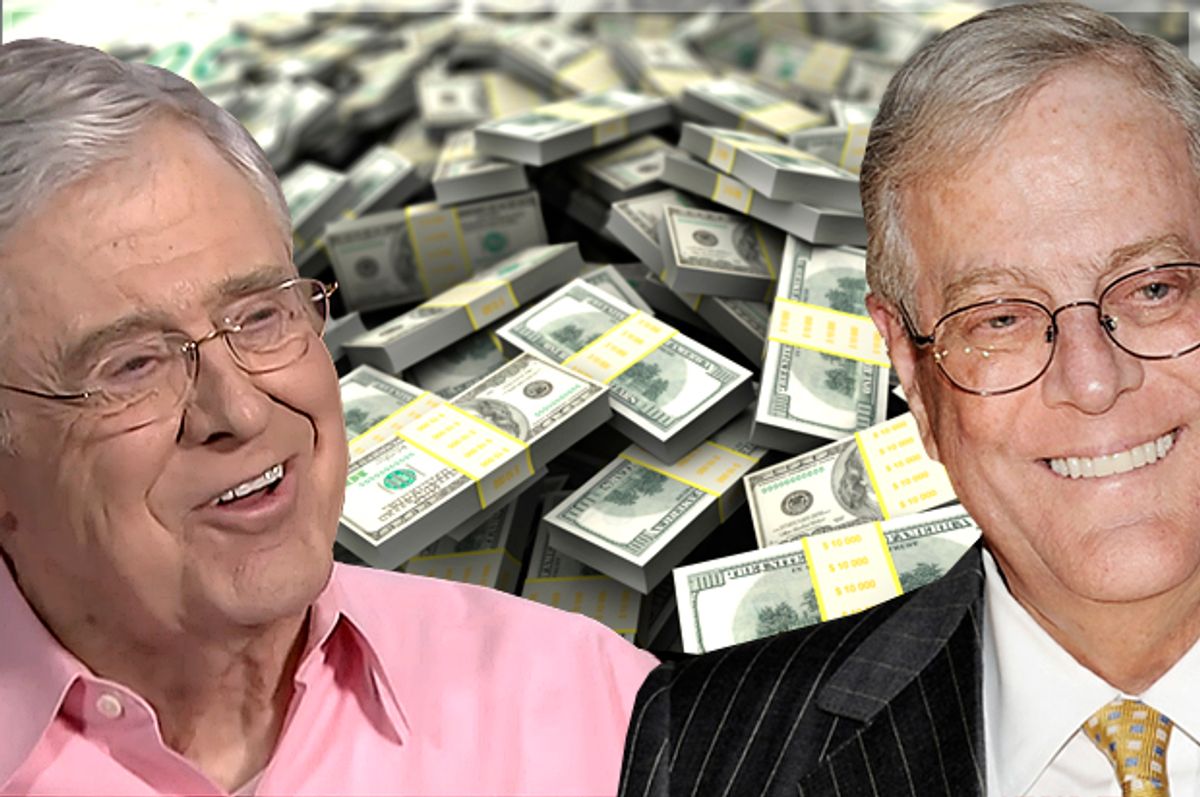 Tug on any right-wing thread in America and you'll most likely find that it's tied to the multibillionaire Koch boys, Charles and David. While the brothers are infamous for funneling hundreds of millions of campaign dollars to presidential, congressional and gubernatorial politicos willing to embrace their self-serving agenda, few know of their equally self-serving push to bend whole state governments their way.

In addition to the $37 million that their industrial conglomerate, Koch Industries, has pumped into politicians, PACs and ballot initiatives in the past two decades, the Kochs are dominant players in all things American Legislative Exchange Council (known as ALEC). Here are some examples:

To keep watch on the front group, the Kochs placed their own lobbyist on ALEC's corporate board.

At least five Koch-funded groups are sponsors of and active participants in ALEC, including Americans for Prosperity, State Policy Network (a coordinating body for Koch-minded think tanks in all 50 states), Heartland Institute, Mercatus Center and the Texas Public Policy Foundation.

In the past two decades, Koch-controlled nonprofit foundations funneled $23 million into ALEC and sponsoring groups.

During the past 14 years, two secretive "dark money" funds used by the brothers — Donors Trust and Donors Capital Fund — poured an additional $77 million into ALEC and the sponsoring groups.

This past spring the duo and several of their billionaire brethren announced that they would put nearly a billion dollars into the 2016 national elections, with a big chunk to Koch-ize the White House. But then Trump happened. Charlie and Dave Koch don't cotton to the Donald so they made quite a show of announcing in July that they would back no presidential candidate this fall.

But while pundits were gazing dreamily at the prospect of an election year without the ponderous weight of Koch cash skewing the presidential race, oodles of money from the brothers' campaign cache was being wormed deep into our country's political terrain, nurturing right-wing corporatists running to fill such down-ballot seats of power as state legislators, attorneys general, judges and secretaries of state.

Digging into only a few of the opaque political funds of the multi-tentacled Koch network, the excellent watchdog group the Center for Media and Democracy uncovered 58 Koch-funded candidates for state legislative seats in Arkansas, Oklahoma, Tennessee, Texas and Wisconsin. The actual number could be much larger, for the bulk of the network's donations go through "dark money" channels that hide the names of donors and recipients.

It's easy to become mesmerized by the Spectacular Donald Show in this year's political circus, but it's time for progressives to focus on the outer rings, where the Kochs, ALEC and their corporate cohorts have laid siege to our state governments. More than staging a firefight here or an ambush there, they have launched a massive, coordinated maneuver to conquer the countryside. If you doubt that the strategy has gone local, consider this stunning fact: Even though the Kochs did not back a presidential campaign and said they were concentrating on only half a dozen U.S. Senate races this year, they deployed 1,600 paid political staffers into 38 states to drive elections and policy campaigns.

This is why we must pay attention. Donald Trump is not the only — or even the biggest — real and present danger to our democratic republic. As Arn Pearson, general counsel of the Center for Media and Democracy, has warned: "There are a lot of different parts of the Koch machine pulling on this oar. From their think tanks up through their elected officials, they're pushing on it. Hard."

You might think this is madness, but madness — spurred by plutocratic greed — is the new American political reality. Just being progressive won't stop it. We have to get aggressively progressive to confront and defeat the Koch-heads in our states.

Rolling back the effects of the continuing decades-long attack on America's ideal of the common good will take some work. Roll up your sleeves and get started. Check out the Center for Media Democracy and www.ALECexposed.org.