An "acute observation of the absurdity of being alive": The star and creator of "Rectify" discuss ambiguity and the series' end

"Rectify" star Aden Young and creator Ray McKinnon discuss guilt, innocence and whether they matter in the end 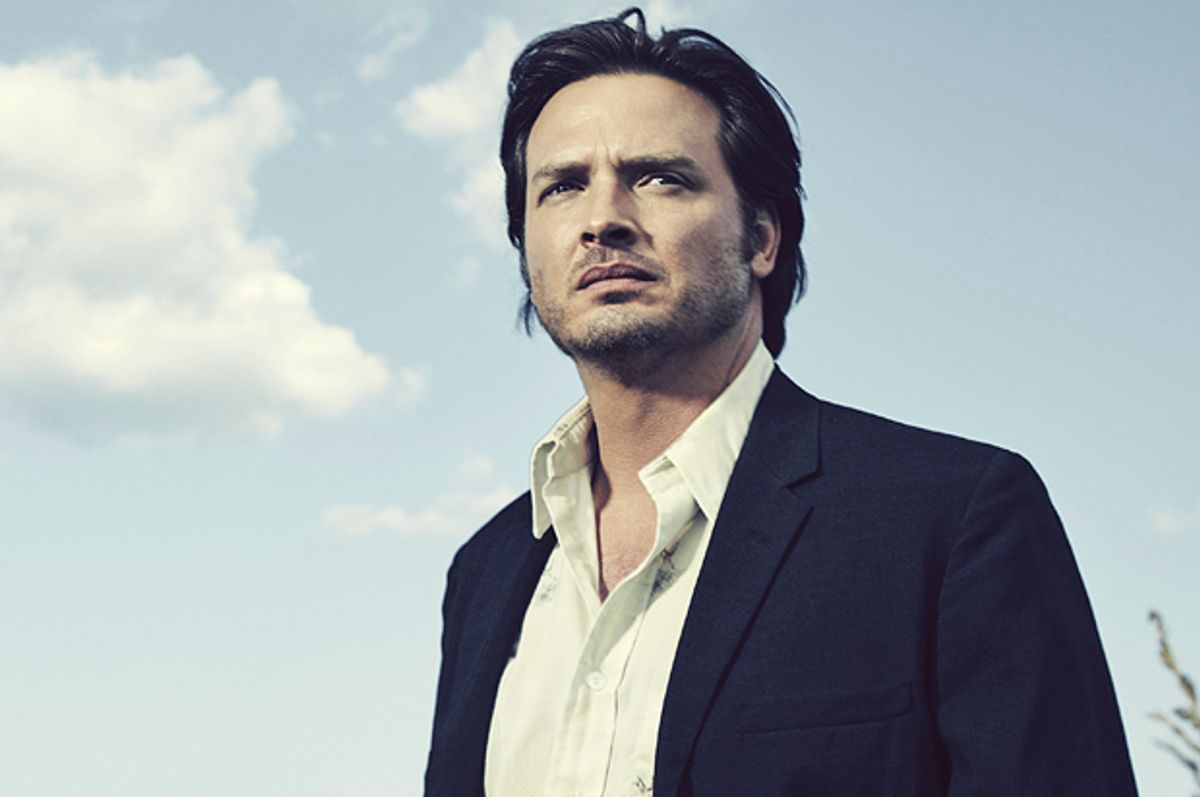 Years before we entered our era of post-truth, SundanceTV’s “Rectify” made gorgeous art out of a story steeped in factual ambiguity. Its protagonist Daniel Holden (Aden Young) is a man re-entering the world after nearly two decades of solitary confinement on death row. Sentenced to death as a teenager for the rape and murder of his girlfriend Hanna Dean, Daniel had his conviction vacated after contradictory DNA evidence was revealed during the appeals process.

But this scientific underscoring of doubt isn’t enough for the folks of Daniel’s small hometown of Paulie, Georgia. Nor is it sufficient to placate Daniel himself; he was under the influence of hallucinogens at the time of the murder and has no memory of the events surrounding it.

That means he isn’t sure of his own innocence or his guilt.

Add nearly 20 years in solitary confinement on death row atop that frightening misgiving, an experience that significantly frayed Daniel’s psychological tethers to reality, and we have a man so confused about the world that life can feel like play put on by apparitions. One of the central tragedies of “Rectify” is that no one can distrust, alienate and punish Daniel as harshly as he does to himself.

At the same time, one of the show's most potent traits is in the narrative's incorporation of Daniel's uncertainty about reality into the drama's overall style. Poetic dialogue is augmented by gauzy cinematography, bestowing a mystical quality to simple interactions between a husband and a wife or a walk across a field. A few dialogue exchanges and entire adventures have left viewers unsure whether what we saw actually happened or merely took place inside of a character's mind.

Series creator Ray McKinnon has intentionally played with Daniel’s relationship to ambiguity to write a unique richness into his world of characters navigating moral and emotional gray areas. Even in Daniel’s new home in Nashville, Tennessee, where he’s slowly acclimating to the idea of self-sufficiency and freedom while living in a halfway house for ex-convicts, he still grapples with the truth of whether he actually killed Hanna.

Meanwhile back in Paulie, Hanna’s family members are still figuring out their own version of the truth about her murder, as we see in this exclusive clip of episode debuting Wednesday that features Hanna's brother Bobby sharing a painful memory with Daniel's stepbrother Ted Jr. (Clayne Crawford).

With four episodes left in the groundbreaking drama’s fourth and final season, it’s a perfect time to share conversations that Salon had with McKinnon and Young prior to its debut (in separate interviews at one press event). The exchanges have been lightly edited for length and clarity.

“Rectify” is extraordinary for its examination of justice, and a certain aspect of the justice system, but entirely from a singular and very internal perspective. Aden, as Daniel, you have had to really be at the center of every aspect of that perspective, both personifying it and radiate it out to the world.

Aden Young: Absorbing it from the people around me too. That's the tragedy that is capital punishment. . . . When somebody can fall through those cracks — who is innocent, possibly — that's one person too many. As a civilized, or a so called civilized society, we have to review that with our hearts. “Rectify” is an examination of the effects of that system and its failures.

Whether Daniel did [the crime] or not is still in question. I don't want to say that he's innocent or he's guilty. . . . We see that in Daniel, in some ways in season 4, has the opportunity to go into a new life. Of course, he's Humpty-Dumpty and after 20 years in prison, will he be able to be put [his life] back together again?

Ray McKinnon: We talk about it this season, that the balm of shame, in some ways, soothes him. But if you feel shame, then you're already self-flagellating, so the slings and arrows of others don't hurt as much.

I think shame and guilt are part of his armor. If this season was going to be about anything it is, will he recognize that and will he do something about it? Very early on, he finds himself at a crossroads. And it comes down to: Are you going to love yourself enough to be your own advocate? So far, Daniel has chosen not to do that. He's kicked the paint can down the road, but it’s unclear if he's starting to head toward something that's positive.

It seems as if Daniel is choosing suffering, except when he confesses. It's almost like he's trying to release himself from that.

Young: When you look at literature or televisions or movies, one thing that you can never really escape is, yes, there occasionally might be the romancing of the cocoon with prison. For the majority you'll see guys saying, "They ain't going to take me back there" because they know what awaits them. Especially when you consider the inhumanity of solitary confinement.

McKinnon:  You know, you hear it with soldiers and you hear it with survivors of crashes and there's this guilt that we feel of being a survivor. And I think Daniel . . . in some ways, feels like he doesn't deserve to be alive because Hanna wasn't. I think he took comfort in the fact that he was in this box and he was being punished for his sins and that he was going to leave the earth and that didn't happen. And so, now what?

Lots of the show’s fans about the dreamy aspect of the cinematography, the editing, even all of the dialogue. At one point I jokingly wondered, what if this is all another imagining of that . . .

Young: What is real becomes an everyday question. After 20 years of that, you could imagine visually that Daniel doesn't actually see the bed or the nightstand or the book — just these auras, these figures floating in toward him of this blonde woman who looks like an angel, this mother figure, this goat man. What are they? Did this day happen or didn't it? Is this real? He's still contemplating the possibility that it might not be when we meet him in season 4.

It's also an incredibly quiet show which I think might have been, if not a bar, but something that made it tougher for the average viewer to find their way in.

Young: It really is [presented from] a place of acute observation of the absurdity of being alive. When he was somebody who didn't have that, that suddenly is jettisoned back on to him. As life appears, so does the absurdity of it. Therefore, you begin to see the madness of a phone that's not smarter than you and all that.

Smartwater, for example. Does it work? Wonderful observations from Mr. McKinnon. One of the hardest things for any writer is to write a character who's more intelligent than the writer. I think, thank God, Ray's that intelligent to have written a character as wonderful as Daniel Holden for me to play.

What would want people to take away from watching “Rectify,” in the end?

Young: In my joy of having the experience to have lived alongside Daniel for so many years, I would hope that people recognize . . . how valuable one human life is and what it means when that life is threatened. The echoes of that decision [to convict Daniel] and how traumatic and destructive that choice can be and that reality is. It is a fiction, but we have to be very careful to measure our fiction against the truth. If we don't, we exploit real suffering and we exploit real trauma. That is not our intention.

By now you know the answer of whether Daniel committed the crime. Or maybe you don't. But do you think by the end of the series it will even matter whether we find out if Daniel really did it?

McKinnon:  Yes, it could matter. Does it make the journey not worth going on if we don't find out definitively? That's not up to me. That's a subjective experience for everybody.

But the ambiguity of his guilt or innocence is such a big part of your storytelling.

McKinnon: I was intrigued by why wrongful convictions happen and the investigating studies, and there are lots of different factors. But law enforcement is arrogant. There can be arrogance. There can be pure ambition. There can be sociopathic qualities. There also can be a group of people who are feeling the pressure of solving something and feeling society's pressure, since we were in villages, [to] find the person, find the person and a lot of times they go, “OK, this feels like the right narrative, now let's go prove it.” The pressure they're feeling is society saying we need to know that there's order in the universe. We need to know there's order in society, law and order.

Sometimes in storytelling, we want to frame it and have it at the end of it all, to have an order and a logic and a cause and effect and the answers, but life isn't always that way. If we are partly reflecting the prism — our distorted prism, life — then if we don't find out everything. That is true to life. Some people might be satisfied with that. It's not something we haven't been true to from the beginning, but we'll have to see what happens and how people react.

[Aden,] do you think it will matter whether we find out if Daniel really committed the crime?

Young: I think it will always matter to some degree. It certainly mattered to Daniel when he realized what had happened.