On seeing Trump and Obama meet in the Oval Office 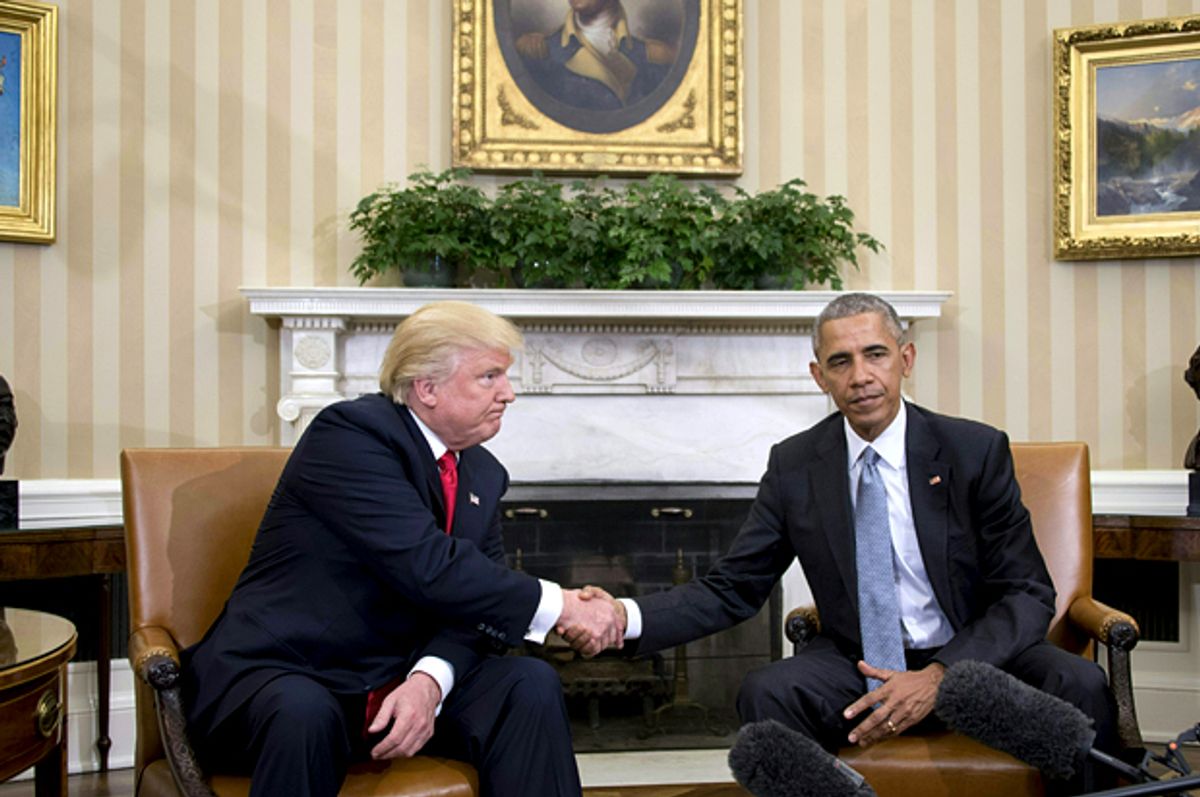 Donald Trump’s first days as president-elect, and the public reaction to them, underscored the psychosis of a nation in the midst of an existential crisis, left in fidgety suspense.

Regarding policy matters, as Salena Zito of The Atlantic pithily surmised, the degree of hand-wringing warranted generally depends on whether one takes Donald Trump literally but not seriously, or seriously but not literally — although most are probably currently suspended somewhere in between, and others are just plain terrified.

Without dismissing policy, there is something to be said (especially in a society in which visual perception is the most prized of the senses) about the imagery the past fortnight has produced; and what unsettling, if subtle, truths those symbols may reveal about American society.

Particularly, the first major image of this rocky transition, when Donald Trump — a man who first rose on the contemporary political scene by questioning the legitimacy of Barack Obama’s presidency and very citizenship — sat across from Obama in the Oval Office as his incoming successor.

Their intensely personal political rivalry — even when it was the laughing matter of a White House Correspondents Dinner — made the hyped lead-up to the ordinarily perfunctory meeting of president and president-elect feel more Kennedy and Khrushchev, Nixon and Mao. And yet, there Obama and Trump were, arguably performing more believably as a working pair than the president and Mitch McConnell have at times.

Still, Obama’s poker face, as he temperately held court before a gaggle of mics and cameras, couldn’t quite conceal the gritting of his teeth or the melancholy in his wearied eyes. His pupils devoid of the youthful sparkle that shone during the 2004 DNC when he declared, “There is not a black America and a white America and Latino America and Asian America — there's the United States of America."

Trump sat subdued — fidgeting and manspreading, looking and perhaps feeling a bit out of place, maybe humbled by the sociocultural whirlwinds he has now fully reaped and by the gargantuan gravity of this power transfer, which dwarfs any corporate merger in its level of consequence.

Watching them play nice before the press corps, assuring the nation and the world that America’s tradition of tranquil transitions of power will remain intact, was important on one level, and startlingly surreal on another.

At a base level, it was a desideratum of their offices; at another, maybe an uncanny manifestation of Trump’s malleable showmanship and Obama’s tactful cool. But also maybe an eerie continuation of the need for black respectability and docility in the face of white vitriol. And Trump has indeed become a face of white vitriol.

Watching the muted b-roll of the encounter on cable television was a tragic bookend to the Obama presidency, an almost too-perfect poetic injustice.

While the clear-eyed have always known the staying power and pervasiveness of systemic racism, the election of Barack Obama was rightfully, in many ways, viewed as a singular, superlative transcendence of bigotry. More plainly, a stately middle finger to the nation’s long legacy of white supremacy. A black man: the head of state and most powerful person on earth.

And yet, at the end of that first black president's time in office, an openly bigoted white man — who initially wavered in denouncing the endorsement of KKK leaders, hurled insults that the highest elected Republican in the country, Speaker Paul Ryan, admitted were “the definition of a racist comment,” and never apologized to those he offended — walked into his home office,"The People's House," to check out the specs before taking over.

Countless journalists, academics, and private citizens would probably have given anything to be a fly on the wall during that first private 90-minute rendezvous. Each man has given a polite, tight-lipped account. History will never know exactly what was said.

Surely, there were many niceties exchanged and polite euphemisms expressed with regard to the gulf between their worldviews. Surely, it took an amount of grace far greater than ever was required by the first handshakes of the Clinton to Bush, Bush to Clinton, Carter to Reagan, or Adams to Jefferson transitions.

Trump, after years of spewing nasty untruths about the former law professor, culminating with the assailment that “Obama founded ISIS,” now upon defeating the president and his party cordially called him “a very good man.”

However, people of color who navigate the wealthy, white corridors of elite halls of power know precisely the move Trump was tacitly pulling the entire time: the dull glare, the soft patronizing chuckle and nod, the light pat (or is it a pet?) on the back and on the knee are all too familiar.

Some white people may roll their eyes upon reading this, interpreting it as overwrought or even paranoid. It’s understandable, really. Like the dog whistles of the Republican Southern Strategy, the frequency of this supremacist sonar is a pitch that many can't hear.

In fact, the subtlety of the maneuver can be mind-numbing, paranoia-inducing. But just because one’s ears cannot sense it does not mean it does not exist.

Those brown and black men and women who have been in the boardroom, the Ivy League classroom, the country club, the white fraternity house, the white girlfriend’s parents’ house, and all other manner of white elite-dominated spaces know this demeaning X-ray vision and unspoken judgement to be true — all too real.

History will never know exactly what was said between Donald Trump and Barack Obama on that autumn day in the Oval Office. But, the age-old message behind the cordial look in Trump's eyes as they privately met, for black men across the country, could easily be imagined: