The normalization of Donald Trump began in "1984": How George Orwell's Newspeak has infected the news media

The mainstream media has been complicit in a dangerous rebranding of Trump, his associates and their views 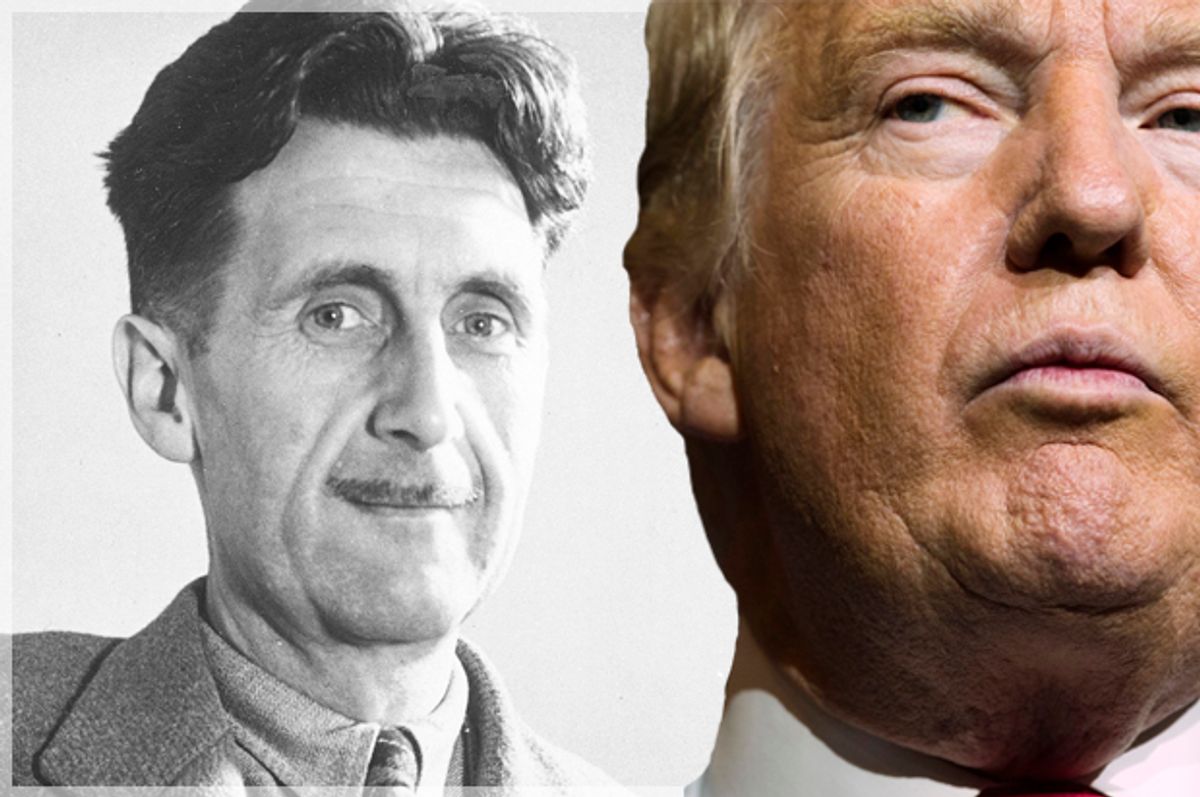 The poet Maya Angelou wisely observed, “When people show you who they are, believe them the first time.”

In keeping with his fascist and authoritarian beliefs, during the 2016 presidential campaign, Donald Trump threatened to sue members of the news media he did not like, offered conspiracy theories that “the media” were somehow unfairly maligning his campaign, called reporters “scum” and “disgraceful” and made reporters the objects of mockery and violence at his rallies. Trump’s white nationalist supporters and other deplorables responded in kind, yelling the Nazi chant “Lügenpresse” and “Jew-S-A” in roaring approval during his campaign events.

President-elect Donald Trump is continuing his war on the free press with enemies lists, a proposed expansion of slander and libel laws and threats to ban critics in the news media access to his administration. This should not be a surprise. In the United States, the Fourth Estate is supposed to serve as a guardian for democracy, a type of watchdog that helps members of the public make informed decisions and sounds the alarm on unchecked power and threats to the Constitution and the values it embodies.

In this moment of crisis, the American corporate news media has been presented with a critical choice: It can normalize Trump’s radical and dangerous anti-democratic behavior or it can stand up against it.

Already, too many members the media seem to be doing the former.

Many decades ago, George Orwell foreshadowed the abuse of language and truth that we have seen this year.

Donald Trump was able to defeat Hillary Clinton because he combined white racism with narratives of “economic insecurity.” While the impact of “economic insecurity” on the election outcome is very much in dispute, Trump was transparent in his efforts to use white rage and bigotry as a way to win the White House. There were many moments when members of the mainstream corporate American news media could have recoiled in disgust at Trump’s antics and tried to hold him accountable, but instead they chose to wait for a great “pivot” in his behavior that never came.

The American corporate news media also helped to legitimize the white nationalists and white supremacists at the core of Trump’s base — and now his key advisers — by allowing them to rebrand themselves as the alt-right.

The media has been complicit in this new marketing technique.

Language is power. Members of the American corporate news media played along and instead of speaking specifically about the actual beliefs, norms and values of the so-called alt-right, they treated it as just a difference of opinion, one located within a wide range of acceptable attitudes and beliefs in American politics. This is Orwell’s warning and wisdom about political language come true:

Political language — and with variations this is true of all political parties, from Conservatives to Anarchists — is designed to make lies sound truthful and murder respectable, and to give an appearance of solidity to pure wind.

Bannon is also one of president-elect Trump’s most important advisers and reportedly will serve as his “chief strategist.” With few exceptions, the American corporate news media has willingly participated in the repackaging and normalizing of Bannon’s, and by extension, Trump’s abominable politics. Instead of calling attention to Bannon’s white supremacist and white nationalist beliefs and affiliations, many of the most influential news outlets have deflected and chosen to describe him in far more agreeable terms.

The New York Times: "Trump’s Choice of Stephen Bannon Is Nod to Anti-Washington Base"

The New York Times: "New Strategist in White House a Provocateur From the Fringe"

BBC: "The combative site serves up an anti-establishment agenda that critics accuse of xenophobia and misogyny."

This is what Orwell called “Newspeak” — obfuscating language used to disorient the public, thus preventing them from fully grappling with the reality of what is actually taking place. Orwell warned about the power of Newspeak in the classic novel "1984":

Don't you see that the whole aim of Newspeak is to narrow the range of thought? In the end we shall make thought-crime literally impossible, because there will be no words in which to express it. Every concept that can ever be needed will be expressed by exactly one word, with its meaning rigidly defined and all its subsidiary meanings rubbed out and forgotten.

The process will still be continuing long after you and I are dead. Every year fewer and fewer words, and the range of consciousness always a little smaller. Even now, of course, there's no reason or excuse for committing thought-crime. It's merely a question of self-discipline, reality-control. But in the end there won't be any need even for that. . . . Has it ever occurred to you, Winston, that by the year 2050, at the very latest, not a single human being will be alive who could understand such a conversation as we are having now?”

Newspeak leads back to the most basic forensic question: Why is the American corporate news media normalizing Trump?

During the 2016 presidential campaign, the mainstream media gave Trump the equivalent of at least $3 billion in free advertising. CNN’s executives have estimated that Trump was worth at least $100 million in ad revenue to their network.

Ultimately, the normalization of Donald Trump is a function of financial and material concerns. It is also a reflection of fear about being denied access to the Trump administration as well as a reminder of how the powerful all too often work with one another against the interests of the American people. Media theorist Noam Chomsky explained the symbiotic and faux adversarial relationship between the corporate news media and political elites in the following way:

Because of their services, continuous contact on the beat, and mutual dependency, the powerful can use personal relationships, threats, and rewards to further influence and coerce the media. The media may feel obligated to carry extremely dubious stories and mute criticism in order not to offend their sources and disturb a close relationship. It is very difficult to call authorities on whom one depends for daily news liars, even if they tell whoppers.

As I have written about previously here at Salon, the sum effect of these forces is a feeling of disorientation and confusion among the American people. They know something is deeply wrong but do not have the language to fully describe it. Conservatives drag the issue space farther and farther to the right even though their policies are unpopular among huge swaths of the American public.

The right-wing news entertainment disinformation machine can argue that Trump (and other Republicans) has a “mandate” when in reality he lost the popular vote and is the least popular newly elected president in the last 20 years. Surrendering to this narrative, the Democrats and the so-called liberal news media will chase Republicans and movement conservatives farther to the right. The result is that radical and extreme politics are (again) made normal and what appears to be the middle is actually much farther to the right — and more out of step with the desires of the American people — than it was before.

In response to such forces, what should people of conscience to do in these challenging times, a nadir in American politics and culture known as the age of Donald Trump?

The American corporate news media is a business fueled by advertising revenue. Boycotts can and should be used against those news media outlets that normalize Trump’s presidency and policies. There are online resources that can help with such a strategy.

Independent and citizen’s journalism should be a priority. Donate to and otherwise give support to those journalists, writers, reporters, websites, filmmakers and others who are dedicated to “speaking truth to power.”

On Trump’s Inauguration Day, those who oppose him should participate in a consumer strike by refusing to shop or do any other business. They should also stay home from work and instead attend protests and rallies.

In the aftermath of the Citizens United v. the Federal Election Commission case, America is fully in the grips of a kleptocracy. This has undermined democracy and freedom. A much-discussed internal memo from Citigroup in 2006, described the plutocrats’ concerns about growing wealth and income inequality and the threat it poses to the rich. The memo highlighted something that all people of conscience who believe in a true “We the people” democracy should never forget:

Our whole plutonomy thesis is based on the idea that the rich will keep getting richer. This thesis is not without its risks. For example, a policy error leading to asset deflation, would likely damage plutonomy. Furthermore, the rising wealth gap between the rich and poor will probably at some point lead to a political backlash. Whilst the rich are getting a greater share of the wealth, and the poor a lesser share, political enfranchisement remains as was — one person, one vote (in the plutonomies). At some point it is likely that labor will fight back against the rising profit share of the rich and there will be a political backlash against the rising wealth of the rich.

The Americans— approximately 75 percent of the electorate — who did not vote for Trump possess the strength of numbers and if they organize properly, significant resources at their command.

Trump, like other authoritarians, is trying to create his own reality. He is doing this with the help of a compliant American corporate news media. This is Trump’s artificial reality; it is not the world as it actually exists. To protect American democracy requires that we reject the normalization of president-elect Trump and his politics. Trump is a cancer in American political life. We must not “give him a chance” to prove himself as Trump has already spent months and years demonstrating his radical and dangerous political beliefs.