Donald Trump will “take care of ‘the African-Americans'”: Will we see a repeat of Redemption, the post-Civil War white backlash? 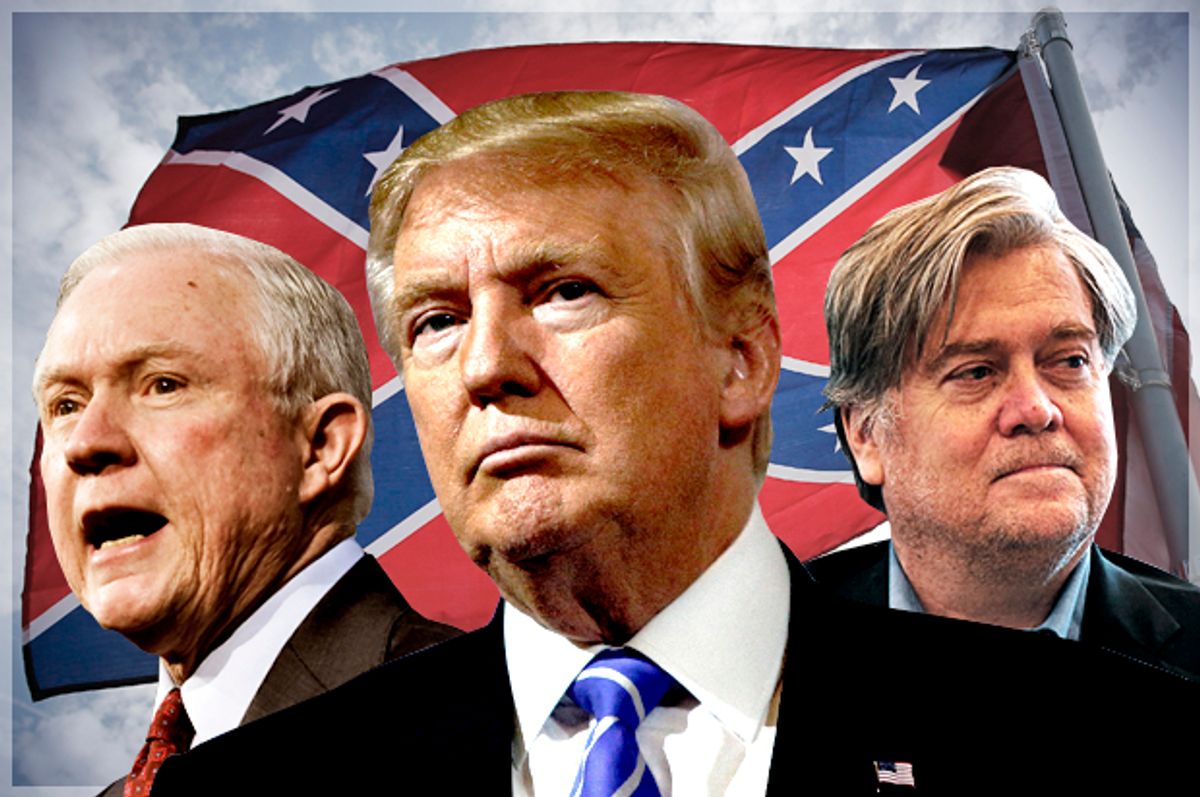 Black folks — and Hispanics and Latinos and Arabs and Muslims and all people of color and women and gays and lesbians and those with disabilities — are you scared yet? You should be. During his presidential campaign Donald Trump promised to “take care of our African-American people” and now Trump is following through in his own special way.

Trump, a man who spent years trying to show that the country’s first black president was illegitimate and not eligible to hold office because of his “country of birth” (read: skin color) ran a political campaign that nakedly and boldly used racism, nativism and bigotry to win over white voters. Trump was successful in his quest and will be the 45th president of the United States of America. There will be no “pivot” to a kinder and more humane and less racist Trump. only the naive and pandering chattering class have convinced themselves such a thing is possible.

President-elect Trump is now putting in place the people necessary to implement an agenda based on white identity politics.

Stephen Bannon will be one of Trump’s closest advisers and serve as his “chief strategist.” Bannon has served as an executive of Breitbart News, one of the internet’s largest white supremacist and white nationalist websites.

Jeff Sessions has been tapped to be Trump’s attorney general. Sessions is an anti-black racist who reportedly called the NAACP “un-American,” called a white civil rights attorney “a traitor to his race” and slurred a black attorney as “boy.” Sessions also opposes basic civil rights protections for African-Americans and other marginalized groups. Sessions’ racial politics are so extreme that his nomination for a federal judgeship was rejected by the Republican-led Senate in 1986. In a cruel irony, as an attorney general Sessions would be responsible for ensuring that civil rights laws are properly enforced.

Retired general Michael Flynn will serve as Trump’s national security adviser. Flynn is an Islamophobe who believes that Islam is an ideology and not a religion. Flynn has also said that it is rational to be afraid of Muslims and called Islam a cancer in society.

The Republican Party chose to wage a decades-long incremental and (often) stealthy campaign of voter suppression, gerrymandering and racial dog whistling against black and brown people. Now Trump has made it clear his administration will openly wage wars against the long black freedom struggle.

In all, this moment feels like a 21st-century version of the Redemption era — the period of white backlash and terrorism against black people immediately after Reconstruction that put an end to the freedoms and democratic gains that followed the end of the Civil War.

Across the South, Redemption was a fearful time: black elected officials being removed from office; the Ku Klux Klan and other white terrorists harassing, intimidating and murdering tens of thousands of black Americans; the voting rights of black Americans being suppressed and denied; African-Americans being subjected to both formal laws and informal codes of behavior designed to publicly humiliate them; black civil society organizations disrupted; and free black Americans being returned to a condition of near slavery under the sharecropping and debt peonage systems.

The end of Reconstruction’s radical experiment in democracy and freedom would also usher in decades of the Black Codes and then Jim and Jane Crow — a state of white racial authoritarianism that would not formally end until the 1960s and the hard-won victories of the civil rights movement.

Today, political analysts are still trying to determine if it was racism or economic insecurity that carried Trump into the White House (my answer: it was both working in tandem, with racism carrying far more weight). But many political analysts seem to have overlooked two very important pieces of the puzzle.

Demos researcher, Sean McElwee has examined data from the 2016 American National Election Study and found that white people who believe that minorities “steal” “white people’s jobs” are much more likely to support Donald Trump. This also impacted the dynamics of the presidential election, as McElwee explains further:

Writing in the Harvard Business Review, Joan Williams focuses on how “the white working class” has been misunderstood by political pundits and analysts in America. For example, instead of having the misleading label “white working class” (the average salary of Trump supporters is $73,000 a year; making them hardly poor or lower class), they should be thought of as members of the economic (but not necessarily cultural) middle class.

These white “working class” Americans are very angry and hostile towards the college-educated “professional classes.” Moreover, in Trump, they saw a celebrity billionaire who they could live vicariously through.

One little-known element of that gap is that the white working class (WWC) resents professionals but admires the rich. Class migrants (white-collar professionals born to blue-collar families) report that “professional people were generally suspect” and that managers are college kids “who don’t know shit about how to do anything but are full of ideas about how I have to do my job,” said Alfred Lubrano in "Limbo". Barbara Ehrenreich recalled in 1990 that her blue-collar dad “could not say the word doctor without the virtual prefix quack. Lawyers were shysters . . . and professors were without exception phonies.” Annette Lareau found tremendous resentment against teachers, who were perceived as condescending and unhelpful.

Michèle Lamont, in "The Dignity of Working Men," also found resentment of professionals — but not of the rich. “[I] can’t knock anyone for succeeding,” a laborer told her. “There’s a lot of people out there who are wealthy and I’m sure they worked darned hard for every cent they have,” chimed in a receiving clerk. Why the difference? For one thing, most blue-collar workers have little direct contact with the rich outside of "Lifestyles of the Rich and Famous." But professionals order them around every day. The dream is not to become upper-middle-class, with its different food, family, and friendship patterns; the dream is to live in your own class milieu, where you feel comfortable — just with more money. “The main thing is to be independent and give your own orders and not have to take them from anybody else,” a machine operator told Lamont. Owning one’s own business — that’s the goal. That’s another part of Trump’s appeal.

Hillary Clinton, by contrast, epitomizes the dorky arrogance and smugness of the professional elite. The dorkiness: the pantsuits. The arrogance: the email server. The smugness: the basket of deplorables. Worse, her mere presence rubs it in that even women from her class can treat working-class men with disrespect. Look at how she condescends to Trump as unfit to hold the office of the presidency and dismisses his supporters as racist, sexist, homophobic, or xenophobic.

Trump and his right-wing populist rhetoric appealed to these white voters because it was an opportunity to act out in a national temper tantrum against an “elite” class that they feel does not respect them. Voting for Trump was also an opportunity for racially resentful and bigoted white voters to strike back against a more cosmopolitan and inclusive America that is at odds with their beliefs and values.

A healthy democracy depends on a type of politics predicated on mutual respect and dignity. When Trump voters explain that they were attracted to his rejection of “political correctness” what is actually being rejected is any sense that people who are not white, straight, male and Christian are due respect in America. In Trump’s world being “free, white and 21” is the most fundamental and important requirement for being included in the American polity.

It is no coincidence that in the week after Trump’s election, that the United States has seen a record increase in violent and other types of hate crimes against people of color, Jews, gays and lesbians, Arabs and Muslims.

Trump’s victory has emboldened America’s white racist id to act out more publicly. But what happens when those who flocked to Trump’s banner realize that he and they will not be able to “Make America Great Again” and that there is no time machine to transport them back to their "Whiteopian" dreams of an idyllic white American past that never really truly existed? And most importantly, what happens when we stand up and push back against the violence, racism, bigotry and wanton cruelness of Trump’s America?

I desperately tried to sound the alarm about the very real possibility of Donald Trump winning the 2016 presidential election. In my writings at Salon and elsewhere I repeatedly said that “a great reckoning is upon us.” It is now here and much closer than a mere idea or sense of foreboding. I hope that America meets this challenge with strength and honor.