Mike Pence wanted to go to see "Hamilton," not a morality play on the importance of minorities and the LGBT community in the United States

Pence, who rode a working-class wave, took the high road when he was being talked down to 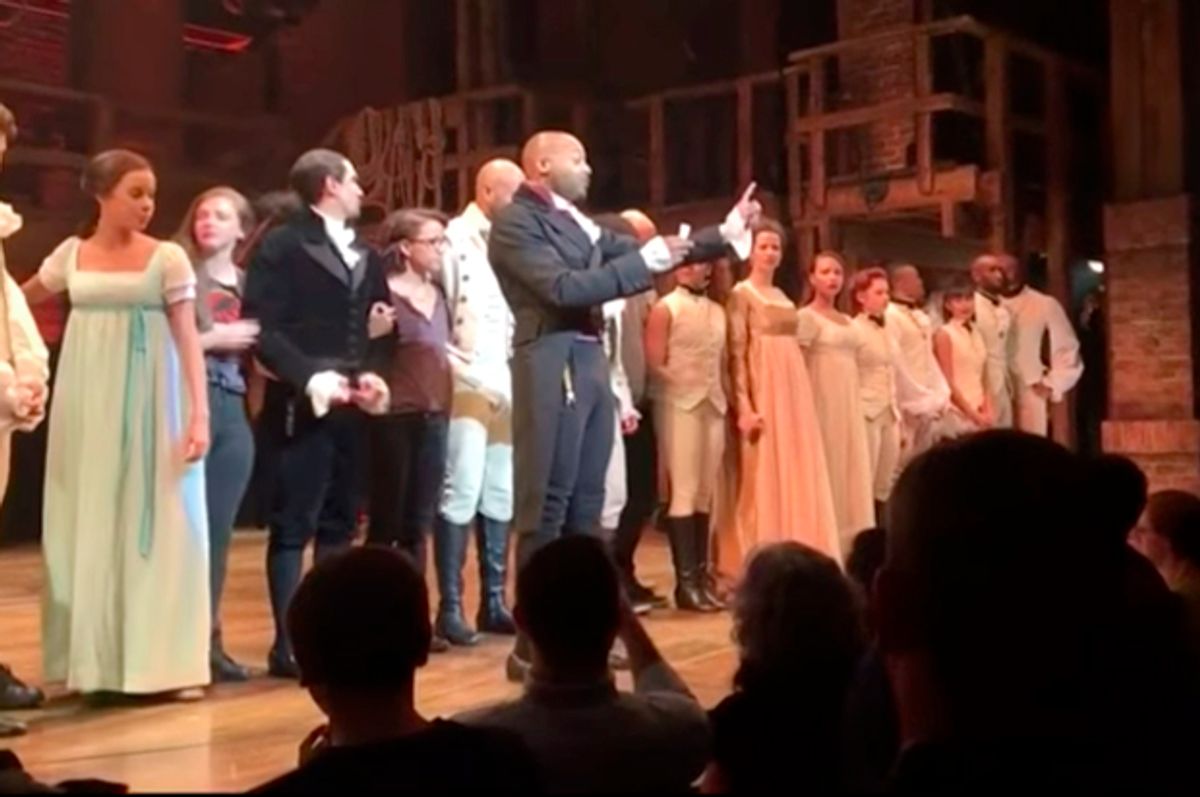 The one-sided sermon by cast of "Hamilton" showed just how lacking in self-awareness so many liberals are. It was a preachy monologue rather than any attempt at dialogue or recognition that the candidate for which they had hosted a fundraiser, Hillary Clinton, had lost for any legitimate reasons. "Hamilton" cast members chose to lecture Pence on diversity in America without acknowledging how the past eight years of shutting out Red State America has severely damaged diversity of thought.

Yes it’s a bit ironic that conservatives lampooning liberals for their “safe spaces” are so incensed about the cast of the musical "Hamilton" lecturing vice president-elect Mike Pence. That said, heated campaign rhetoric should be put aside, and replaced by respect for a duly-elected governor who will soon be just one heartbeat away from leading the free world. Just as the State of the Union outburst by Republican Rep. Joe Wilson against President Obama was inappropriate and lacking nuance, so too "Hamilton" was classless in its self-righteous outburst.

Pence was a class act in his response to the lecture: “When we arrived, we heard a few boos and we heard some cheers and I nudged my kids and reminded them, that’s what freedom sounds like,” he said on Fox News. “I did hear what was said from the stage, and I can tell you I wasn’t offended by what was said. I’ll leave to others whether that was the appropriate venue to say it.” Pence also praised the show as “incredible,” and complimented the “incredibly talented” cast.

Of course, the actors can exercise their First Amendment rights, but on balance this was a wasted opportunity by "Hamilton," led by Actor Brandon Victor Dixon, who plays Aaron Burr. Dixon could have expressed their concerns while also acknowledging that liberals like him have misread 60 million Americans and that both sides needed to come together. But, by giving another example for Trump’s supporters to dig in further, it further creates a martyr complex for Team Trump (see Mark Cuban’s excellent diagnosis of that here).

It’s unfortunate that liberals aren’t taking the time to digest the quantitative, demographic understanding of Trump’s rise. It was forecast nearly four years ago by political scientist Charles Murray in his book, "Coming Apart: The State of White America 1960-2010," (similar demographic trends were also outlined by Robert Putnam) where he outlined the vast discrepancies in behavior between upper-class, well-educated whites and low-income, low-educated whites. Rich white people had far less crime, had intact marriages, were more religious and committed far fewer violent crimes.

Murray traced this behavioral chasm to 1960, the start of the “culture wars” that enabled the widespread acceptance of anti-social behavior and unmarried family formation — what Harvard researchers have shown to be the most powerful negative variable in class mobility. Murray drew the conclusion that upper-class white people don’t preach what they practice and so their less-wealthy counterparts suffered as social capital unraveled. This was well before Trump — and now we see that Trump is the figure who is straddling this behavioral gap. In fact, he is the perfect character who embodies this tension Murray describes, and perhaps his presidency can meld these two classes back together.

In some ways, Obama was the mirror opposite of Trump: he straddled the chasm between privilege (private schools as a child, Ivy League college, etc) and struggle (single mother, racial tensions, etc) but the scope of his presidency failed to resonate with rural America, he chose to focus on urban areas. Trump is the natural response to this myopia, and Dixon and his castmates were engaging in the exact same myopia.

Donald Trump is filling an Obama-shaped void in society created by eight years of liberal bias in a mainstream press that failed to hold him accountable, and often painted the Tea Party as a fringe movement rather than listening to their legitimate concerns.

If conservative-leaning artists (of which there admittedly don’t seem to be many) gave liberal politicians the Dixon treatment, then certainly conservatives would be less incensed about this, but there really is no ideological balance coming out of the Hollywood and entertainment industry, which are incredibly left-leaning — its leaders donate to Democrats far more than to Republicans.

It’s unlikely that Dixon and his castmates have taken the time to cultivate an ideologically diverse collection of friends and understand the concerns of Trump voters. If they had, we’d have seen a much different — a more nuanced and compelling — exchange. It was nice of Dixon to ask the audience to stop booing Pence, and his message was a legitimate request for help, but there was no balance in his message the way that comedian Dave Chappelle had in his recent monologue about Trump. Maybe Dixon should ask for a role next as Chappelle’s understudy.