Pardon a turkey, clear the soul: Why public forgiveness is an important ritual

Rituals in general are important, which is why we revere saving a a turkey so much 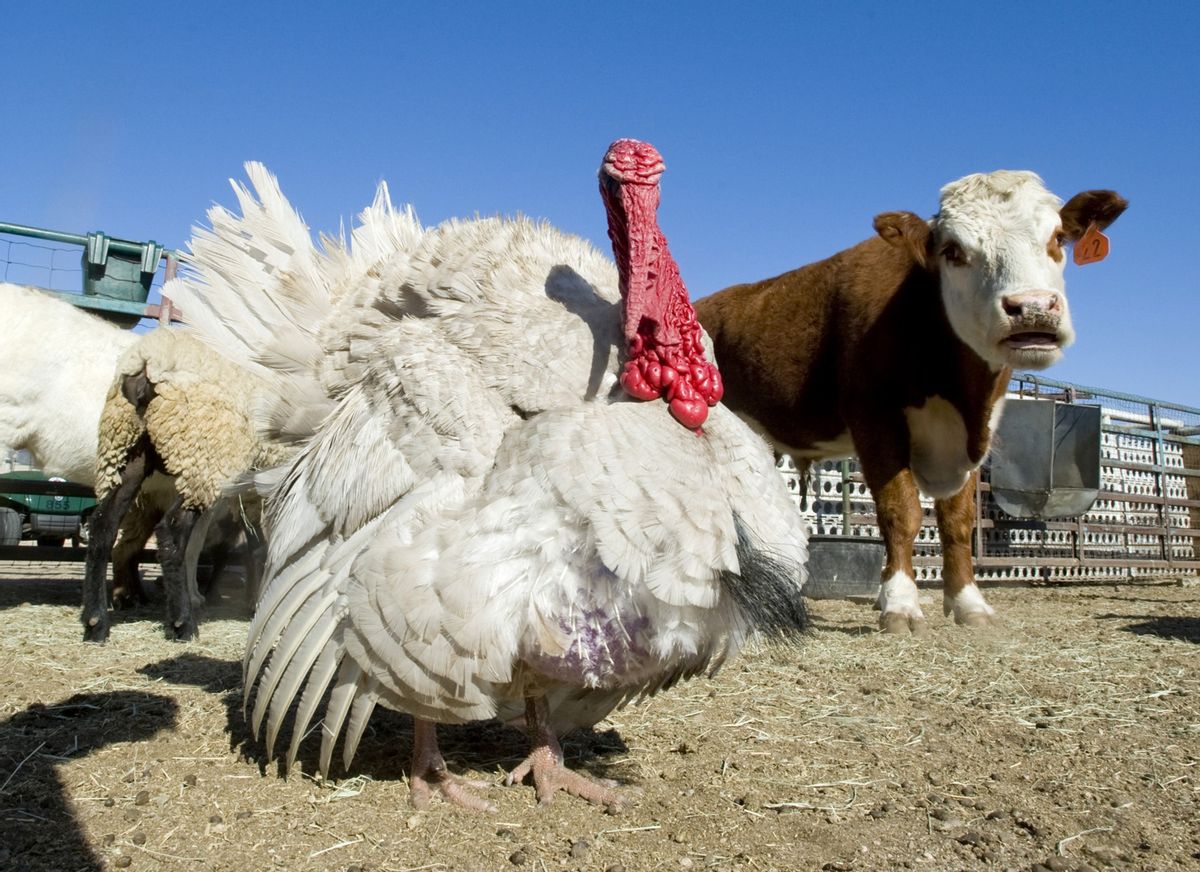 FILE - In this April 18, 2016, file photo, Tim the turkey, center, stands next to a cow at the Orange High School farm in Orange, Calif. Two college students have been sentenced for kidnapping the turkey that had to be euthanized this week, five months after being found reeking of beer with a broken toe. Steven Koressel and Richard Melbye were sentenced to one year of probation Thursday, Sept. 1, 2016, after pleading guilty to entering an animal enclosure without consent. (Sam Gangwer/The Orange County Register via AP, File) MANDATORY CREDIT (AP)
--

Since 1989, when President George H. W. Bush first formally instituted the practice, U.S. presidents have pardoned a turkey shortly before Thanksgiving each year.

Although the turkeys offer no offense, their presidential pardoning invites the question: What is the significance of such a public rite of forgiveness?

As a researcher of the history of race and religion, I have long been interested in the ideas and ceremonies that make forgiveness possible. The presidential turkey pardon draws on the long traditions of forgiveness in the world’s religions. A very public act of pardoning, as in this case, reminds us about the important role rituals themselves play in society.

The many ways of forgiveness

For example, the Islamic community treats forgiveness as a process that takes place in front of and with the support of other Muslims. It is not a solitary endeavor. Muslims expect the offender to display remorse and directly request forgiveness from the harmed party so that justice can be restored. The community does not expect that forgiveness be offered until after justice has been realized. Nonetheless, Muslims are encouraged to forgive because it represents a more virtuous path.

The Jewish rabbinical tradition also links forgiveness with justice. As in the case of Islam, forgiveness is conceived as unfolding within the community. It is the offender’s responsibility to approach those who have been harmed. Jews celebrate their highest holiday, Yom Kippur, or the Day of Atonement, by seeking forgiveness from others and from God.

Within the Christian tradition, the expectation is that believers will offer forgiveness whether or not those who have harmed them have repented. Forgiveness from God is not contingent upon how an adherent has acted but rather on the believer’s faith that he has been saved from God’s judgment through the intervention of Jesus Christ.

According to this belief, human failings so offend God’s sense of justice that only the death of God’s own son in the person of Jesus of Nazareth will right the balance. Christians forgive because they, too, see themselves as forgiven. These are traditional Protestant values. In contrast, Catholics emphasize the fulfillment of religious observances such as reciting a set number of prayers along side belief in forgiveness from God.

Buddhists place less value on the idea of forgiveness itself and more on the renunciation of anger and desire for revenge. As in the case of Christianity, there is no expectation that these twin renunciations are in any way dependent upon the attitude and actions of the offender. In other words, whether or not the offender seeks repentance is irrelevant.

Many Native American communities, especially those in the Southeast, ritualize the practice of forgiveness in the Green Corn Ceremony. In this annual ritual, also known as “itse selu” or “Busk,” tribal members forgive and reconcile wrongs ranging from debts to adultery. Murder is not addressed through this ritual, indicating that special attention is required in the case of deeper harm.

The value of rituals

The Thanksgiving Day turkey pardoning draws its meaning from different religious traditions. But why does such an action take place in public?

The answer can be found in the role that ritual plays in binding societies. Late 19th-century sociologist Émile Durkheim observed that all rites serve to periodically reaffirm a social group’s identity through its appeal to collective values. By observing even the most common of rituals, the community expresses what is important in its collective life. Even the seemingly inane pardoning of a turkey emphasizes that the idea that public forgiveness is possible.

French historian and philosopher René Girard took that observation a step further by arguing that public rituals of sacrifice deflected social violence that would otherwise be released internally within the group.

In the particular instance of pardoning a turkey, the rite may seem so trite as to not apply. Yet, British anthropologist Victor Turner reminds us that the drama of ritual depicts both human experience and its response to it. Turner contends that such rites reduce social turmoil – both by presenting emotions and then by releasing them.

The ritualized pardoning of a turkey draws our attention. It connects with our desire for forgiveness from expected punishment and to a possibility that we, too, might one day be pardoned. Whether we as a nation or as individuals act on that desire is a question for our collective reflection over the upcoming holiday meal.

Tobin Miller Shearer, Director of the African-American Studies Program at UM and an Associate Professor of History, The University of Montana