Pat McCrory's desperate last stand: Undermining the legitimacy of the election he lost

North Carolina's Pat MCrory is claiming that voter fraud led to his defeat, setting up another attack on democracy 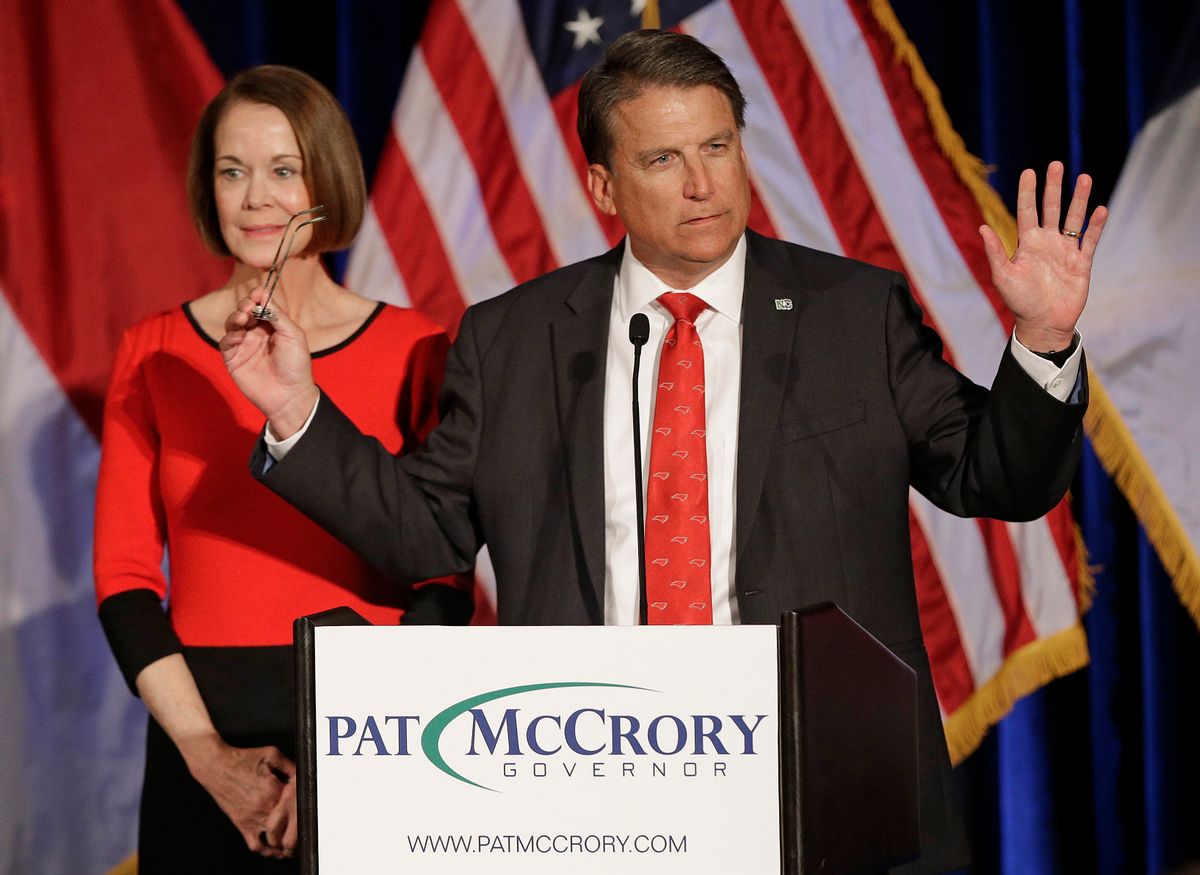 We’re now two weeks removed from Election Day, and it looks like we might actually get the electoral legitimacy crisis we all worried about, albeit on a smaller scale. It appears that North Carolina’s Republican Gov. Pat McCrory has narrowly lost a tough re-election fight to Democrat Roy Cooper. Cooper leads McCrory by about 6,000 votes and has already declared victory and begun making transition plans. McCrory, however, is refusing to concede.

Rather than throwing in the towel, McCrory is instead throwing around wild and unsubstantiated allegations of widespread voter fraud across the state. The governor is claiming that results in half of North Carolina’s 100 counties were tainted by irregularities, but some of those claims have already been dismissed by county election boards. The result is close enough to trigger a recount, which McCrory officially requested today, but past recounts in close North Carolina elections have not produced any significant changes in vote tallies.

Nonetheless, McCrory’s team is accusing Cooper of winning by illicit means and trying to cover up evidence of a supposedly fraudulent victory. “Why is Roy Cooper so insistent on circumventing the electoral process and counting the votes of dead people and felons?” one McCrory flack said in a statement. “It may be because he needs those fraudulent votes to count in order to win.”

On the face of it, the McCrory camp’s voter-fraud conspiracy doesn’t make a ton of sense. The two other Republicans running statewide in 2016 — Donald Trump and Sen. Richard Burr — managed to defeat their Democratic opponents by comfortable margins: Trump won by 4 points, and Burr won by 6 points. Somehow the malevolent political force that allegedly engineered all this fraud managed to do it in such a way that only McCrory would feel its impact.

The more satisfying explanation for his narrow loss is that McCrory was dragged down by the massively unpopular House Bill 2 law, a discriminatory statute that targeted transgender residents and prompted a high-profile corporate boycott of the state.

Instead of facing that reality, McCrory is right now engaged in a malicious effort to undermine public confidence in the integrity of the electoral system. In a democratic system, losers of elections have a responsibility to concede to the victors. They can, of course, pursue whatever recount procedures are available, but ultimately the health of a democracy hinges on defeated candidates accepting the will of the voters. McCrory’s dark conspiracy portraying himself as a victim of widespread fraud is an affront to the legitimacy of the system.

The question that hangs over all this is: Why go ahead with this? Slate’s Mark Joseph Stern wrote that he suspected that McCrory might be trying to set up a desperate, flagrantly undemocratic Hail Mary that would reinstall him as governor even if he’s still trailing in the popular vote:

It sounds crazy and desperate, and it is. But I have to point out that North Carolina’s Republican House speaker, when asked about this possibility, did not rule it out. “The media has certainly covered the constitutional provision that gives the General Assembly the authority to weigh in on [the governor’s race],” he told reporters, “but given that the elections are not finalized at this point, I think further comment would be premature.”

We’re still a long way from that point. No one has yet petitioned for the legislature to take this route, and the process for settling an election in the North Carolina General Assembly is arduous and would likely require many months to see through to completion. But as insane and unlikely as it is, you can’t dismiss it out of hand given the North Carolina GOP’s long and disturbing history of anti-democratic maneuvering.

Even if McCrory does end up conceding, however, he’s already damaged the legitimacy of his successor’s administration. Republicans in the state and elsewhere will take it as a given that voter fraud accounted for Cooper’s margin of victory. They’ll use it as “evidence” for why they need to revisit the voter ID laws that federal courts threw out as discriminatory attacks on black voter enfranchisement. McCrory’s absurd accusations of fraud might not send him back for another term as governor, but he’s still helping his party in his state rig democracy in its favor.